The Best of the Huntress: Wonder Woman #294 Review 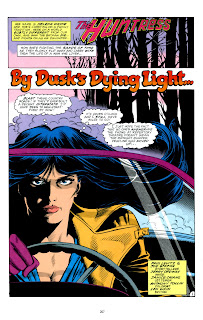 Summary: Edgar Stenville is dead and Helena Wayne is racing against the clock to save the life of a man who's been a part of her life since birth: the family butler, Alfred Beagle. Speeding through Gotham's interstate roads on her way to the New Stratford Repertory Theatre (where Alfred is being held captive), Helena thinks about what she feels like doing to the thugs who are holding Alfred hostage.

On a normal day, Helena Wayne is all about preventing crime, capturing, and prosecuting dangerous criminals. This day, however, isn't like most days, and for the first time in her life, Helena does feel like killing criminals. Not because she thinks it's the right thing to do in this situation, or because the situation itself demands it, but because she is fearing the worst case scenario. In this case, she's contemplating murder as 'pay back' for the murder of someone she considers family. Unbeknownst to her, however, is that Alfred is not alone. Her boyfriend, Harry Sims, is also being held captive with him.

At the New Stratford Repertory Theatre, Harry Sims thinks about why he went to see Alfred at Wayne Manor while being tied down to a chair. He figured that if he talked to someone who's been with Helena all her life, he can get some answers as well as better insight for why Helena does what she does. What compels her to decide to put on a costume and beat up criminals as the Huntress? What major event in her life got her to even consider it in the first place? What kind of person is she to think that this is the best way to pursue law and order when she already has a law degree? Is this someone he actually wants to pursue a romantic relationship with? These are all questions that have been on his mind ever since he discovered Helena's secret identity. As he regains consciousness and makes his silent escape, Harry also thinks about how the thugs don't care that he's Gotham's district attorney or that he doesn't have the skills necessary to take them down like Helena does.

By the time Helena arrives at New Stratford Repertory Theatre, she goes in completely unleashed. She mercilessly beats one of the thugs unconscious and threatens to kill him if she doesn't find Alfred alive. When she reaches the thug who has Alfred captive, he reveals to her the details of Stenville's plan knowing he has no chance of winning against her: he informs her he had already given Alfred his 'permanent sleeping pill' thats set to cause damage to his stomach by midnight. This news does nothing to relieve Helena of her violent desire to kill someone. 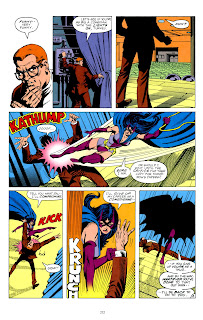 Review: Despite its short length, this is a pretty intense chapter for two reasons: one, this is the most shaken up we've seen from Helena Wayne. Second, we see Harry Sims again for the first time since the story arc where Helena teamed-up with Dick Grayson (both to discuss her relationship woes and to help her take down Stenville the first time), and he reveals some more woes of his own. We actually learn new things about both characters, starting with Helena.

Prior to this chapter, Helena has strongly believed in upholding a higher standard as a superhero, which included not resorting to killing as a way of resolving conflict. Her encounter with Stenville, however, made her realise for the first time how dangerously complicated things can get when battling crime, and how dangerous she herself can get when pushed to her limits. While Helena has threatened to kill criminals before, originally she only did so as a knee-jerk reaction to being emotionally provoked, but didn't actually mean it. Kind of like how no one really means 'I will truly kill you' when annoyed. But in this particular case, she does sound furious when she says it, and she does come off as though she actually means it. While she's most likely saying 'I will kill you' as a knee-jerk reaction even in this situation, the fact that she was very brutal in the way she took down one of the henchmen, you're not led you believe she won't actually do it if pushed too far. The penultimate chapter in particular will make this point very clear.

Another major revelation in this chapter is how Harry Sims personally feels about Helena and his relationship with her. We are shown in this issue that he does care about her, but is also very concerned about why she does what she does. He rationalises in this chapter that if he talks to the man who's been with her since she was born, he can at least learn some important details about her past that may have factored into her decision to fight crime as the Huntress. While it's obvious Alfred would've never disclosed the fact that Helena's father was Batman and her mother was Catwoman (two very significant factors that set Helena off on her path to becoming the Huntress), it does make you wonder what Alfred would have said to Harry in this situation. Would he have actually revealed that the tragic deaths of Helena's parents at the hands of criminals inspired her to fight crime as the Huntress without revealing who her parents actually were? Or would he have told her that discussing Helena's secrets are not at his discretion and that he needs to learn those details from her on her terms? Knowing the Earth-2 Alfred, he most likely would've said the latter. But we may never really know.

Beyond that, there's really not a whole lot to dissect in this chapter until the next two chapters, but it nonetheless does continue the theme that Levitz started to explore in the last chapter, which is the complex question of whether or not heroes should kill. Given the circumstances Helena has been put through so far, one would rationalise she would be perfectly justified to make an exception. At the same time, however, it does beg the question of whether or not Helena would actually be okay with murder, especially if done as a knee-jerk reaction to losing a loved one or being angered? It's not a question Helena takes lightly, and even acknowledges that it's wrong for her to even consider killing. The fact that Helena is experiencing these complex emotions while racing against the clock to save an important person in her life, makes her more life-like in my opinion. 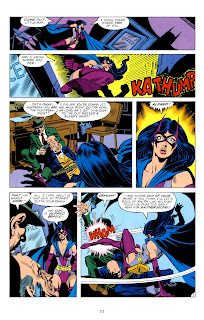 I think most of us are like Helena in that most of us don't believe that murder is the answer to anything, but when it comes to our loved ones, seeing their lives threatened does provoke very strong emotions and can even make us potentially dangerous. The fact that we develop strong emotional attachments to other people, especially to our own families, we feel a strong desire to protect them and we fear losing them, especially in the worst way possible.

When loved ones do get murdered, you do react strongly to the perpetrator and you'll even desire killing that person yourself as payback for taking away someone who was important to you. Even if you acknowledge that it won't bring that person back, and that you won't get any longterm satisfaction from killing your loved one's murderer, the emotions are nonetheless very real to the person experiencing them, and that's an understanding Levitz brings to the character of Helena. (Whether or not that desire to kill is biological or a consequence of socialisation is a question for psychology research).