The Best of the Huntress: Wonder Woman #301 Review 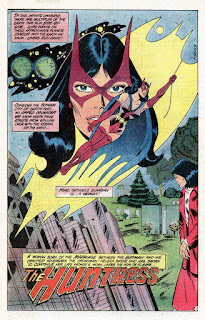 Summary: It's an ordinary day for Gotham's high school students as they attend a career day fair at their school. Also attending the event is Helena Wayne as a guest to talk about the law profession. The students are less than enthusiastic about the job prospects, prompting them to ask Helena what it is about her career that makes it "fun" for her. Helena answers the students' questions about the details of her job and then talks about what she "enjoys most" about it by very implicitly talking about her exploits as the Huntress. Helena gives an example of such a case by discussing an earlier exploit she made as the Huntress earlier that day.

Review: It is Valentine's Day today, and what could possibly be more appropriate than discussing Helena Wayne's complicated love life? Despite the story centring on the theme of career choices and what that actually means to Helena (who divides her time between being an attorney at law and a costumed superhero), it is also a story arc that begins to deconstruct Helena as a character by exploring her internal conflicts as well as her relationships to the most important people in her life, both of which intersect. 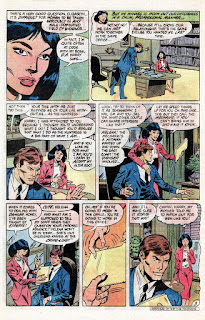 One of Helena's relationships that's explored in this chapter is the one that she has with her boyfriend, Harry Sims. In the previous Paul Levitz run, Harry was depicted as a man with very conflicted feelings about Helena. On the one hand, he cares about her a lot, but he is also not comfortable with her dangerous lifestyle as the Huntress. His discomfort is both stemmed from the fact that he finds Helena's activities as the Huntress suicidal, and also because the idea of her being a costumed superhero in league with the Justice Society disrupts his idea of what a relationship with a woman should be like--an idea that comes from a place of sexism.

In the previous Levitz run, Harry's sexism was subtle enough to be excused as "concern" for the heroine, but in Joey Cavalieri's run, Harry's sexism is more explicitly acknowledged. Beginning with this chapter, Harry begins to demonstrate distrustful and controlling behaviour, which are two of the symptoms of an abusive partner. In this particular story, Harry starts blocking Helena's access to high profile cases as a way of controlling her activities as the Huntress.

One thing that Cavalieri does well here is that he doesn't try to excuse Harry's troubling behaviour by dressing it up as "concern" for Helena's safety or "proof of his love" for her as many writers of fiction are often prone to do. Instead, he acknowledges the abusive behaviour for what it actually is by writing the heroine as acknowledging the fact despite what Harry says about being concerned for the danger involved in her Huntress exploits. This is most notable in the scene where Helena thinks to herself "ohhh Harry, my mother told me to watch out for men like you."

The scene where Helena recalls the conversation she had with her mother about being involved with abusive men is pretty significant because it calls back to the story in Brave and the Bold #197 where Selina revealed to her father, Bruce, her past experience with marriage to an abusive man. In that story, Selina recalled the trap she fell into believing that she was marrying a decent man only to find out later on that he was actually a monster on the inside. Though Harry is not depicted as physically abusive towards Helena, the psychological abuse is still present in the form of him talking down to Helena like she is a child and controlling what information she has access to.

Another theme Cavalieri explores in this story that directly intersects with the first issue is sexism, openly acknowledged by Helena here. Though Cavalieri has Helena acknowledge the prominence of gender inequality in the workplace--and specifically in the law profession--Cavalieri explores two different ways sexism manifests itself: in the relationships that women have with the men in their lives and in their interactions with the men they encounter on the street.

In the first case, Harry's abusive behaviour comes from a place of infantilising women and denying them their agency. The second case comes from a place of seeing male as normative and treating the female gender as the weaker gender. The latter is most notably present in Helena's confrontation with the Mechanic as the Huntress, in which he ridicules her for doing a "man's job." This is in spite of the fact that she effortlessly hands his own ass to him. In either case, both are part of a system that treats women as unequal to men, and that becomes a recurring theme throughout Joey Cavalieri's run of the Helena Wayne Huntress.

The rest of this chapter very much functions as a prelude to the Undertaker story arc, which further examines the theme of sexism as it relates to Helena's experience as a female crimefighter taking on dangerous male criminals. It additionally begins to set the premise for deconstructing Helena's character. It specifically seeks to address what being the Huntress means to Helena, how her experiences as a woman in two male-dominated spaces affects her relationships to people, and how a combination of all of these things affect her psychological wellbeing. While Levitz' run is tonally more adventurous and optimistic, Cavalieri's run by contrast starts to see Helena as a more complex character with more diverse experiences, which makes his stories with Helena more thematically mature.