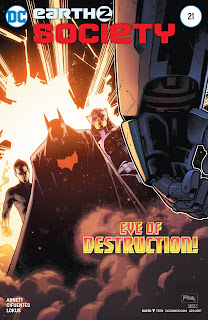 Review: This is essentially the final chapter of this story arc, which I imagine makes the actual final issue the epilogue to this series. Admittedly, this was a chapter that went out with a bang in a rather anticlimactic way, or at least, it didn't pack the emotional punch it was aiming for. Pretty much all the heroes are beaten and one of them is killed in the process, and it took Alan Scott by himself to overcome the Ultra-Humanite's control on him to beat him. Once he killed the Ultra-Humanite, that was pretty much it. There aren't any meaningful character moments to speak of that are actually worthwhile. 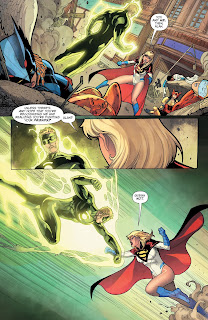 The only character writer Dan Abnett attempts to give a meaningful conclusion to is the artificial Dick Grayson character few people care about. I'm assuming it was planned since the Annual at least that this character would be getting the axe soon since there was some foreshadowing to this moment in that story. The Annual did make a point of emphasising that the legacy of Batman is constantly met with a tragic end, and Grayson's demise in this issue continues that trend. However, his heroic sacrifice is rendered meaningless by the fact that he was never a legitimate Batman successor to start with and was literally nothing more than a gimmicky placeholder. As such, his loss doesn't carry any emotional weight for the reader. At least not compared to if this had been the original Dick Grayson from the pre-Crisis Earth-2 continuity who was actually mentored and raised by Helena's father, and worked alongside him as the Robin to his Batman.

If this Earth-2 Dick Grayson had a similar backstory to the pre-Crisis original, the heroic sacrifice would've at least paralleled that of Helena's father in Earth-2 #1 in a much more meaningful way that would've carried a much stronger emotional weight on Helena's character, and ultimately the reader. But that is exactly the problem: there is absolutely nothing about this Dick Grayson that is actually authentic. There never was. Without that original history intact, the scene where Helena cradles Grayson's lifeless body in mourning feels forced and outstandingly artificial. A problem not helped by the fact that we--the reader--were never shown the journey of how these two people met, how they bonded, how they formed a relationship, and what led to Helena to eventually allow this strange man to wear her father's identity and even run her family company. We were just told that these things happened, but we were never shown the details.

At best, Abnett seems to acknowledge in this issue that this Dick Grayson is not particularly popular with fans given the rather trivial way he was killed. Compared to the heartfelt way James Robinson depicted Bruce saying goodbye to his teenage daughter in Earth-2 #1 before sacrificing his life to save her (and ultimately the planet from the threat of Apokolips), that same amount of thought is not present in Dick's sacrifice. He is instead depicted as behaving rather recklessly. It's hard to say for certain if Dick thought his son was killed by the Ultra-Humanite, effectively acting like he had nothing else left to lose, or if he was just being stupid. 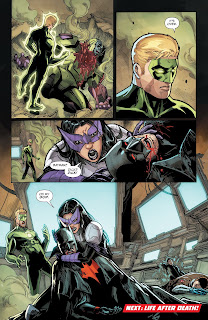 It was never confirmed by the end of this issue if John is in fact dead or simply unconscious following the Ultra-Humanite's attack. If he does end up surviving, then Dick very stupidly orphaned his own son, which honestly continues the trend of him being a bad parent--something that became characteristic of him since Earth-2: World's End. Either way, Abnett got rid of the final problem that was hurting this series which was the unnecessary inclusion of a new Batman on a world where Bruce already has a daughter of his own to succeed him, and especially one that has zero authenticity as Dick Grayson. Unfortunately, with this series ending, his removal doesn't really matter at this point.

With only one issue left, the final issue will most likely focus on telling individual short stories with these characters as they adjust to their new setting. Hopefully, moving forward with Justice Society Rebirth, we get the classic versions of all of these characters back on Prime Earth, and Prime Earth versions of characters who don't already have a pre-Crisis or pre-Flashpoint counterpart like Val-Zod. Hopefully, moving forward, the Justice Society characters will be given more heartfelt story arcs that allow for meaningful character development. Two things this botched New 52 Earth-2 has consistently lacked was the heart and soul of the pre-Crisis original, and the complex, interconnected histories and character developments of the classic characters people are more fond of. Let's hope that with the reinstatement of the original characters to Prime Earth, Rebirth changes that.