Jay Garrick Returns in The Flash #22 for "The Button" Crossover 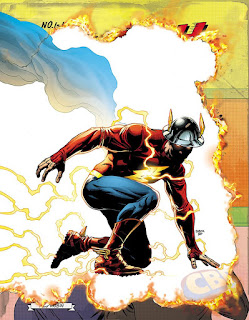 THE FLASH #22
Written by JOSHUA WILLIAMSON
Art by HOWARD PORTER
Cover by JASON FABOK
“The Button”: Two greatest detectives in the DC Universe unite to unravel the mystery behind a certain blood stained smiley face button stuck in the Batcave wall. However, what begins as a simple investigation soon turns deadly when the secrets of the button prove irresistible to an unwelcome third party — and it’s not who anyone suspects! This is a mystery woven throughout time, and the countdown starts here!
On sale MAY 10 • 32 pg, FC, $3.99 US • RATED T

Today, DC Comics revealed the cover for The Flash #22, which is the concluding issue of the much anticipated "The Button" story arc set to take place in April. Much to everyone's surprise, it features the return of the classic Jay Garrick Flash (complete with a new version of his classic costume) on the cover.

The details of Garrick's role in the crossover have not been revealed by DC, but I'm guessing he's the "unwelcome third party" teased in the solicitation. It is equally not known if the current version of the character appearing in Earth-2: Society will play any role in the classic character's revival (or if he's even the classic character himself), but there is no evidence at the moment that the two are in any way connected.

As for I how personally feel about the reveal? Incredibly optimistic and excited! So much I can barely contain them. I'm feeling optimistic because it looks like we won't have to wait long to get a proper Justice Society revival later this year. I'm also feeling excited because it looks like Geoff Johns is looking to bring back (literally) everyone who has ever been a DC comics character that was lost to a reboot or another. Just last week, DC revealed the cover to Batman #22, which features the return of both the Flashpoint Thomas Wayne as Batman and Eobard Thawne as the Reverse Flash--two characters that were featured very prominently in Flashpoint. 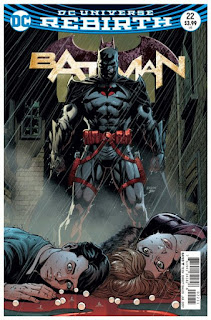 Going by what we know so far, it looks like Johns is moving through every reboot and major event that significantly changed the DC Universe in some capacity. It looks like he's starting with Flashpoint moving all the way through Zero Hour and taking it all back to Crisis on Infinite Earths, the main reboot that forever redefined the DC Universe and, in many ways, even broke DC continuity in very profound ways.

Amongst the casualties of the Crisis reboot was the original Golden Age Trinity from Earth-2, resulting in new origins for Fury and Power Girl post-Crisis, and the loss of the Golden Age Dick Grayson, along with the original Helena Wayne version of the Huntress. With Convergence undoing the events of Crisis on Infinite Earths, there's a very good chance we'll see all of these characters again on Prime Earth with their original histories intact.

We're already starting to see some of those long forgotten characters popping up in various DC Rebirth titles from the original Golden Age Joker in DC Universe Rebirth #1 (effectively hinting at a return of the Golden Age Batman and his family) to Ching Lung (who first appeared in Detective Comics #1 in 1937) in New Super-Man #8. Superboy-Prime is also being hinted at in the current run of Action Comics, and Superboy-Prime played a major role in both Infinite Crisis and Final Crisis--two other events that also redefined the DC Universe.

I'm really liking the approach that Geoff Johns is taking with this initiative. He keeps building excitement by gradually revealing every month which characters and aspects of DC history are making a comeback to the mainstream continuity. Not only will this keep DC's sales momentum on the upside, but it also helps to build fan interest in these characters in order to successfully launch new titles with them in the future.

For example, how do you build interest in a new Justice Society title? Bring the classic members back through their family books, and that's exactly what DC is doing. Bringing Jay Garrick back in the main Flash book is a good idea for building interest in his character, especially since The Flash is already selling pretty well and has a pretty big fanbase. We've already seen Dr. Fate return in Blue Beetle, and we've already seen Johnny Thunder in the DC Universe Rebirth #1one-shot. If the pattern continues, we can probably expect to see the original Alan Scott Green Lantern return in the Green Lantern Corps book, the original Black Canary in Birds of Prey, Power Girl in either the main Superman or Supergirl books, and even the original Helena Wayne Huntress in the main Batman or Detective Comics books. Either way, I want to be pleasantly surprised!

Already, this is turning out to be a great year for DC, and I can't wait to see what else is going to unfold. We already know which characters I desperately want to see make a spectacular comeback, and if DC does bring back pre-Crisis Helena Wayne and Kara Zor-L, guess who'll be throwing every dime and dollar at DC for years to come? You know it!
Posted by Diane Darcy at 15:34