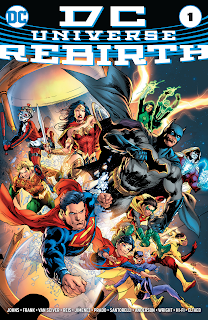 1. Better clues to the whereabouts on the Justice Society

Okay, I admit this one is personal to me. But one of the things I found frustrating about Rebirth in its first year was the lack of any real strong clues on the Justice Society for fans to feel excited about.

At best, we saw three of its original members resurface like Jay Garrick, Kent Nelson, and Johnny Thunder (five if you count Carter and Shiera Hall), but not much else. Everything else has been a tease like briefly mentioning Jakeem Thunder and showing brief glimpses of the original Earth-2 Robin in Nightwing and the Golden Age versions of Superman and Batman in Trinity. There's also still the three Jokers mystery, one of which happens to be the original Golden Age/Earth-2 Joker. But no real hints as to the whereabouts of the rest of the Justice Society characters, or whether or not Earth-2 will play a role in their revival. So far we only know that Michael Holt collected data on a parallel Earth, but nothing explicit was confirmed.

To be fair to DC, though, it is possible that the reason we learned so little about the status of the Justice Society this past year is because they're probably still trying to figure out how to fix what they broke with Earth-2. Originally, Earth-2 was solicited for a Rebirth title, but those plans were scrapped with no explanation given. At best, Geoff Johns confirmed at Emerald Comic Con last year that the classic Justice Society was planned to return during Rebirth and that the New 52 Earth-2 would continue to be its own thing.

Another thing that is leaving me anxious about the absence of the Justice Society is not knowing who we can expect to see return. I know that Geoff Johns' love of the JSA isn't limited to the classic team since he loves many of the legacy characters as well. But I still find myself asking: can we expect everyone to return, including characters that were originally wiped out in past reboots like Helena Wayne Huntress, Jade and Obsidian, and even lesser known characters like Beth Chapel and Yolanda Montez? Will any of the original Infinitors like Lyta Trevor and Hector Hall also make a comeback with their original histories restored? Can we expect to see newer additions like Val-Zod and Queen Marella return? Will Kendra Munoz-Saunders comeback as a dark-skinned Latina woman?

There's a lot to be anxious about given DC's past history with their Justice Society property going as far back as the Crisis reboot and even as recent as the New 52. One thing I hope will be different this year is for Dark Knights: Metal (which I will be following) to reveal more about the whereabouts of the Justice Society and hopefully have these characters return before or during Doomsday Clock.

This is one I keep coming back to, namely because part of the reason the New 52 didn't succeed at attracting a new diverse audience was largely facilitated by the lack of diverse voices working behind the scenes on these books. That is to say none of the decision makers for diverse comics like Static, Earth-2, World's Finest, Blue Beetle, Batwoman, and Birds of Prey--for example--matched the groups that were being represented on the page. With a largely monolithic white heterosexual male editorial structure calling the shots on the majority of these books, diverse representation was pretty token at best or badly executed at worst.

As mentioned in the previous post, DC started to course correct on this issue by hiring more diverse creators to various DC books, including some of their high profile ones for Rebirth. It also appears that creators are being given more creative freedom to tell their stories within the larger narrative of Rebirth without DC editorial micromanaging the hell out of these stories like in the New 52. This is a very good start on DC's part, but they still need to diversify their editorial staff in order to help DC meaningfully grow their audience post-Rebirth. They are, after all, the people who get final say in a story before it goes to publication.

In my experience as a bisexual Latina woman who has been a DC Comics fan since the age of six, there are a lot of well intentioned white heterosexual men in this industry who want to genuinely invite other people to these characters and stories. The problem is few of them actually know how to do that without accidentally reinforcing existing problems, usually subtly.

Part of the problem in many cases is that white heterosexual male privilege often blinds them to the realities of marginalised communities and rarely recognise the nuances of those lived experiences, let alone how they intersect with one another. Few of them understand why certain characters and narratives resonate strongly with marginalised readers and why erasing them out of existence with an opportunistic reboot hurts these communities. They also don't always recognise why certain ideas are problematic with the potential to cause longterm harm to certain characters and stories, and by extension marginalised communities as well.

The importance of having diverse staff runs deeper than just improving the quality of DC's books. In addition to creating better diverse stories that come from a place of authenticity, it is especially paramount to creating a DC community that is actually inclusive of marginalised communities and avoids tokenism. Having diverse staff will help to dismantle the dominant white heterosexual male perspective on the DC Universe itself to truly reflect the diversity of the real world.

It will also lead to a DC Comics corporate culture that gives more opportunities to women, people of colour, and members of the LGBTQA community to tell stories with characters who look like them, as well as flagship titles like Superman, Wonder Woman, Batman and the Justice League. The kinds of books that make you a "big name" in this industry. It'll also help tremendously with avoiding creative misfires that cause diverse books to lose sales and/or create longterm damage to diverse characters. It'll prevent problems with representation in general.

So far, DC has avoided significant editorial misfires during Rebirth, at least none akin to what we saw during the New 52. As far as misfires go, there are only three that I can think of off the top of my head: the fridging of Lois Lane in a hallucination created by Manchester Black during the recent "Black Dawn" story arc in Superman, and greenlighting stories that give Wonder Woman a male successor to her legacy (for the upcoming Justice League "Legacy" story arc) and a brother (for an upcoming Wonder Woman story arc)--two stories with the potential to erase Wonder Woman's canonical daughter (Lyta Trevor) and twin sister (Nubia) respectively.

While it's obvious we don't know how these stories are going to pan out, the fact is these are still the kinds of creative decisions that contribute to longstanding problems with female representation at DC Comics rather than challenge them. If DC hires more diverse editors (women, people of colour, and queer people) to work for them, DC can reduce the problem--or better yet--eliminate it all together.

I would say this is the one thing DC could've done better during the first year of Rebirth, especially for books like Birds of Prey, Batgirl, Batwoman, Blue Beetle, Supergirl, Cyborg, Deathstroke, and Odyssey of the Amazons--all books fronted by diverse characters, developed by diverse creators.

In addition to marketing their lesser known works and creators more effectively, another thing that DC can do better is increase the visibility of these creators and characters by putting them on the forefront of major DC storylines and/or events instead of their more high profile creators and characters that already sell themselves. I understand that Batman is a highly profitable character for DC and the primary reason he gets used in every major DC storyline and event. But he's also a character who doesn't need more visibility and leaving him out of major events will have no effect on the high sales of his books.

That concept might sound ludicrous and unrealistic to executives, but it is also true that sticking to what you know already sells is how you create a safety net and prevent meaningful growth. It especially prevents new talents from rising to a higher profile. High profile talents like Geoff Johns, Jim Lee, and Scott Snyder didn't get to where they are now on sheer luck. They got to where they are because they were given the opportunities to work on high profile projects at DC that increased their visibility.

Not only did people get to see how exceptionally talented these men are at their craft, but being a part of these high profile projects did significant wonders for their careers. Yesterday Geoff Johns and Jim Lee were just a writer and artist respectively. Today, they are DC's President/Chief Creative Officer and co-publisher respectively. How long before Scott Snyder is himself offered a higher level position at DC due to his repeat success?

To quote Suicide Squad actress Viola Davis "you cannot win for roles that are simply not there." And she's right. You cannot acquire higher level success or higher recognition for your work if the opportunities don't exist. One thing I hope DC will do differently for their second year of Rebirth and beyond is put their lesser known creators and characters at the forefront of major DC projects and promote them.

Having examined the first year of Rebirth, I feel that for the most part it's been a major success on many of the fronts both the New 52 and DCYou initiatives failed on. Many characters are back to resembling the heroes we know them as, the quality of the stories have improved dramatically, and DC is coming out with new ways of recruiting new diverse creators to their books. These efforts, however, need to also extend to their editorial staff and DC needs to actually market their lesser known creators and characters better. (Also, please give us more info on the Justice Society.)
Posted by Diane Darcy at 20:54