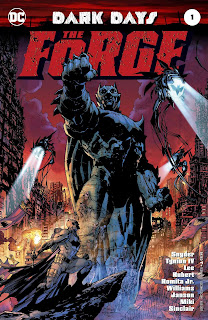 This week, we learn more about Carter Hall's past as Prince Khufu in the pages of Dark Days: The Forge #1, effectively restoring both his original Golden Age and post-Crisis histories. There is also mention of the multiverse in both this week's The Flash #24 and in Dark Days, which has more significant focus in the latter book than the former.

While we haven't seen anyone unique to DC's multiverse emerge on Prime Earth (at least aside from the original Justice Society characters who originated on the pre-Crisis Earth-2), we did get explicit confirmation in this week's Dark Days: The Forge #1 that Michael Holt has been travelling the multiverse this whole time and collected data from one parallel Earth in particular. Which Earth he acquired data on isn't explicitly stated on the page, but the last known Earth Michael was seen on was the New 52 Earth-2 just before it got destroyed by Darkseid in the events of Earth-2: World's Ends.

Could this be the Earth he collected data on? It's hard to say. The version of Earth-2 he is most familiar with is the one that got destroyed by Darkseid, and the last planet he saw following that apocalypse was the Telos planet the Earth-2 survivors temporarily colonised in Earth-2: Society before they rebooted their entire universe from scratch. Since those characters are now on the third incarnation of their world, Michael no longer has any valid data on an Earth that no longer exists. For all we know, Michael may have travelled to a different parallel Earth by then and could've collected data on this other Earth for Batman who is shown in Dark Days to have knowledge of the multiverse as well.

So where could Michael have gone to collect data for Bruce in secret? Since the Justice Society is still largely missing except for a few select members, and DC is reported to have major plans for them this year, it is highly probable that the Earth he collected data on is the original pre-Crisis Earth-2. At least, this would be the most significant Earth for DC to revisit as it is this version of Earth-2 that is most relevant to DC's Rebirth initiative. 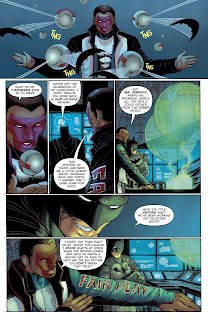 The pre-Crisis Earth-2 is the original home of DC's Golden Age continuity and heroes, all of which are missing from DC's current mainstream continuity. The pre-Crisis Earth-2 was also one of the casualties of DC's 1985 mega event Crisis on Infinite Earths. One of the artefacts that appears in Dark Days is the cosmic tuning fork that slowed down the initial collapse of the multiverse before ultimately collapsing into a single Earth in that particular event.

Considering that Batman is well aware of the cosmic tuning fork's existence (he is the one who placed it underneath Superman's fortress of solitude as of this story) and plans to use it for an upcoming "Crisis" first hinted at in this story, the original DC multiverse may end up playing a bigger role in Rebirth than we initially expected. Exactly how the multiverse will be involved and which characters will show up for the upcoming event is what we don't know. However, I imagine it will be a lot of fan favourites like--in my case--the pre-Crisis Helena Wayne Huntress.

I would normally wrap up this post with some kind of speculation of what can happen or what I would like to see happen, but for once, I actually want to see what does end up happening. I feel like I've been speculating for far too long and each time that I think I've figured out where DC is going with Rebirth, I end up learning something entirely new that changes my perspective on things. So for once, I'm just going to see how this plays out.

By now Geoff Johns (whom I tweet to a lot) is probably MORE than aware at this point that I want to see the classic Helena Wayne Huntress to return with Power Girl and the Justice Society, and he'll probably end up surprising me in a way I won't expect. He always does. So I'll just let him work his magic this time and hope to be surprised in a good way.