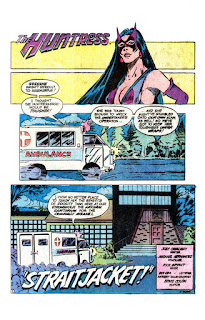 Review: This chapter is both a continuation of the Undertaker storyline that kickstarted Joey Cavalieri's run of Helena Wayne's narrative and also the start of a new arc entirely. How exactly this storyline connects to the previous one isn't explicitly established, but given what's happening behind the closed doors of Arkham Asylum, it can be assumed that the Willow Funeral Home was being used to dispose of any patients who didn't survive the experiments of Doctor Tarr and Professor Fether. On that note...

Much of this story is a love letter to Edgar Allan Poe's short story The System of Doctor Tarr and Professor Fether. It doesn't doesn't get more obvious than the fact that the story's main antagonists are named after the fictional "Doctor Tarr" and "Professor Fether" from the original story--two "people" who are implied to be non-existent. Within the context of Cavalieri's story, the people occupying the names of "Doctor Tarr" and "Professor Fether" are shown to be actual people, but--like in the original story--it is not confirmed that these are their actual names. Considering that the two men are carrying out illegal experiments on the asylum's patients, it can be easily assumed that these are aliases. 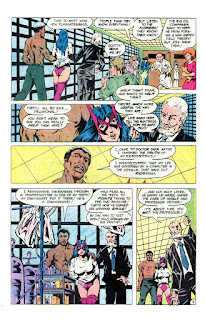 In addition to the obvious antagonists, the story itself is also very structurally similar to Poe's short story, complete with some of the same story beats. In the original story, an unnamed male protagonist decides to tour a mental hospital in the south of France to learn more about a new system known as the "system of soothing" as employed by a superintendent known as "Monsieur Maillard." The system reportedly treats patients by indulging their mental illness rather than punishing it, yielding better results. The treatment was also inexplicably abandoned in favour of a new system as employed by a "Doctor Tarr" and "Professor Fether."

As the protagonist learns more about the hospital's inhabitants and staff, he quickly becomes aware of the real reason the "system of soothing" was abandoned. It turned out the patients usurped the asylum and subjected the hospital staff to the same treatments, making them the new "patients." When he learned of the patient that led the revolt, the patient turned out to be none other than his host, "Monsieur Maillard" the former superintendent of the asylum and propagator of the "system of soothing" who himself went mad. It is then implied that "Doctor Tarr" and "Professor Fether" were two hospital staff who were tarred and feathered by the patients.

In Cavalieri's story, Helena is involuntarily functioning in the role of the unnamed protagonist of Poe's story, but it is unclear whether the story's antagonists are themselves patients that took over the asylum. So far, there is no indication that they are, which is actually consistent with Poe's story as the protagonist there was also not aware that his own host was a patient in his own asylum. The fact that Helena herself questions whether the hospital staff are really the hospital's patients are also similar to the questions posed by Poe's protagonist. One major difference, however, is that Helena has far less agency in this chapter than the protagonist of Poe's story. On the subject of agency, one character who is finally written with agency is the Undertaker's former henchman, Milo. 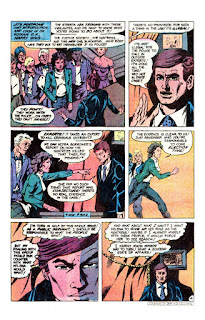 In the previous chapters, Milo was nothing more than a servant to a white male villain. He only took orders and didn't have much of an actual voice. When he did speak, his lines very generic for his calibre of character, and nothing about him stood out. In this chapter, he actually has agency, thoughts, and a voice that are actually his own. In this chapter, we also learn more about Milo's backstory, and it turns out he is a man who has been abused all of his life due to this race. Originally used as a tool by the Russians, Milo set himself free by removing the device from his tooth that allowed the Russians to control him and found himself at the mercy of Doctor Tarr and Professor Fether, who have since become his long-lasting friends.

Another character who resurfaces in this story is Helena's boyfriend, Harry Sims, who is caught between the proverbial sword and the wall. On the one hand, he is being pressured by the public to take action against the Huntress, Blackwing, and the Justice Society following the reports of a journalist named Nedra Borrower. On the other hand, Harry is loyal to his girlfriend who happens to be the Huntress, a friend of Blackwing, and a member of the Justice Society. As much as he wants to protect Helena's interest, he also thinks about the fact that he wants Helena to abandon her life as a superhero and lead a normal life.

I really wish there was much more to say about this chapter. I loved all the references to a classic Edgar Allan Poe story, but this wasn't a story that afforded its protagonist--Helena Wayne--much agency, which leaves very little to talk about in the way of character development. So little of this story was actually about her and the bulk of it was just exposition. All that happens to the protagonist in this story is that she is restrained and drugged and basically sets up for the next chapter where we do get a peek inside her head.