Favourite DC Heroes: Who Are My Top Ten? 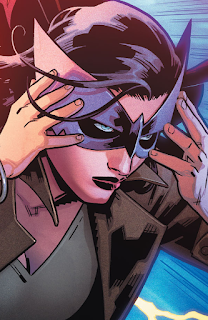 This is a question I get a lot from friends and followers on social media and with good reason. After all, in a large superhero universe like DC, there has to be more than one character that I like, right? Otherwise, why bother investing in DC at all?

It's a no brainer which of DC's roster of characters would make #1 on my list (duh), but what a lot of fellow DC fans want to know is "who are the other DC characters I love just as much as my #1?

This is admittedly the kind of list I have trouble putting together because there are definitely more than ten DC characters that I actually like. But to make this list easier to compile, I thought about following questions:

Coming up with the order was even harder. How do I rank this list based on these particular factors? I then thought about the following things:

With all of that in mind, I was able to compile this list. Unsurprisingly, many of these characters debuted during DC's Golden Age with only three of them first appearing in the Bronze Age. Just about all of them are connected to the Justice Society in some capacity, either as an active or former member, an ally, or as family. Either way, they are my top ten DC heroes of all time!

Let's count them down! 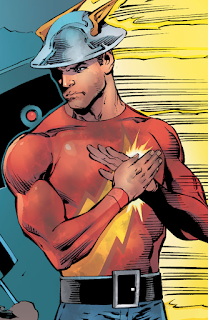 When many of us think of the Flash, many of us think of Barry Allen or Wally West, two guys who acquired their speed via a lab accident, plus a lightning strike. The original Flash, Jay Garrick, however, acquired his speed under slightly different circumstances. Having made his debut in Flash Comics #1 in 1940, there was still a lab accident involved, but the accident was caused by him accidentally knocking down his own experiment while he took a smoke break (something you never do in a lab, by the way, as it can create a hazardous environment). The experiment was him studying the different kinds of vapours "heavy water" produces when you dismantle the covalent bonds that holds water together at varying degrees. I admit, my own background in science may be a significant factor here, but I found Jay's "heavy water" vapour experiment as the source of his speed very fascinating and certainly got me interested in reading his Golden Age appearances. (DC needs to reprint them...) 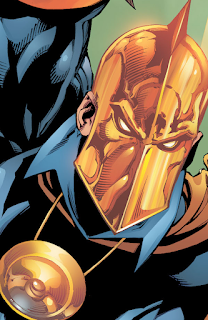 Another character whose origin piqued my interest is that of the original Doctor Fate, Kent Nelson. In addition to my love of biological science (and chemistry to a degree), anthropology is another one I love following research on. The fact that Doctor Fate's origin is rooted in anthropology coupled with sci-fi and mysticism is, for me, a huge part of his appeal. As detailed in More Fun Comics #67 in 1941, his original Golden Age history placed him in Egypt in the year 1920--roughly around the same time that various Egyptian tombs were being discovered in the Valley of the Kings. His origin also builds on an old theory that aliens visited the Ancient Egyptians, which his father, Sven, wanted to prove. This unfortunately led to Sven's death, but it also led a young Kent Nelson to accidentally discover Nabu (an extraterrestrial being from the planet Cilia) who then mentors Kent in the art of magic with the intention of having him use this gift to protect his planet as Doctor Fate. 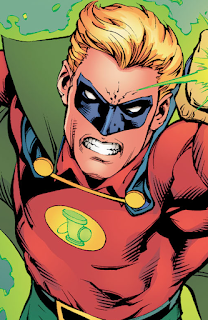 On the subject of sci-fi and mysticism, I next have the original Green Lantern, Alan Scott, whose original Golden Age origin is its own mythology. Having made his debut in All-American Comics in 1940, Alan Scott was a young train engineer who unknowingly had a thousand year old mystical lantern in his possession. A lantern that was crafted out of a meteorite that landed in Ancient China. The meteorite contained a sentient extraterrestrial green flame that would fulfil three prophecies: bring death to its first owner, bring life to its second owner, and bestow its powers to its third owner. Alan Scott turned out to be that third owner, whose own life was saved from a train wreck by the green flame. Upon acquiring the green flame's powers that he contained in a ring, Alan went on to fight crime both on his own and with the Justice Society. He later married the Flash's foe Rose Canton (the Thorn) who also became the mother of his two children Jennifer-Lynn Hayden (Jade) and Todd Rice (Obsidian). 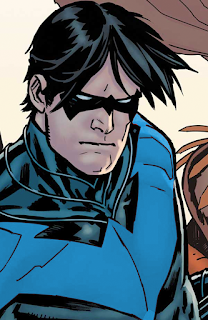 What kind of DC fan would I be if I didn't include the original Robin on this list? Having made his debut in Detective Comics #38 in 1940, Richard "Dick" Grayson has become one of the most beloved characters of the DC Universe. Though mostly famous for being Bruce Wayne's original sidekick, Dick is also the character who's built the most enduring relationships across the entire DCU. As the most loyal, loving, and trusting member of the Batman family, he has maintained good relationships with every living member of the Wayne family, every member of the extended Bat family, and even founded a superhero team of his own--the Teen Titans--with various other superhero sidekicks. He was also a member of the Outsiders, a member of the Justice Society (on Earth-2), and an ally to the Justice League. Among the women he's been romantically involved with include Barbara Gordon, Princess Koriand'r, and Helena Bertinelli. 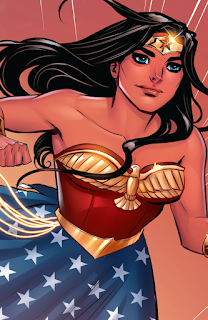 As the original open feminist of DC Comics, there was no way I was leaving Wonder Woman off this list! It's a no brainer why Wonder Woman stands out as one of the most unique and interesting characters of the DC Universe. She was born and raised on an island populated exclusively by women and she was originally brought to life by the goddess Aphrodite as her answer to Queen Hippolyta's desire for a child. On Themyscira, Princess Diana didn't just learn how to be a successful combatant. She was also thoroughly educated in various other arts, sciences, and philosophies. She also learned compassion and how to persevere without the restrictions of patriarchy to hold her down. By the time she made her debut in man's world in Sensation Comics #1 in 1941, she was in fact a wonder woman. More than she carried the strength of Hercules and the wisdom of Athena, Diana carried with her the message of female empowerment, liberation, and female legacy! 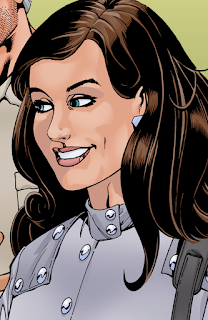 This one might strike like an odd choice for a lot of people because Lois Lane isn't one of the costumed types. But that is precisely why I love her! She is the superhero who doesn't wear a mask or a codename to make any kind of impact on the world around her and she still makes the same kinds of enemies. Having made her debut in Action Comics #1 in 1938, the original superwoman herself was actually my first hero as a kid. As much as I love Superman, everything that he does, and everything that he stands for, Lois is the hero who is most like me. She is ambitious and career-oriented, but she also makes room for the people in her life. She doesn't put up with any sexist bullshit and will stand up to anyone who undermines or insults her, but she is also there for the people she cares about, especially if they're in trouble. Sometimes Lois says and does things that gets her in trouble, and when she is in the wrong, she owns up and moves on. When she is in the right, however, she won't let you forget it! 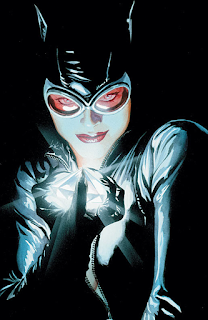 This too was an odd choice for a lot of people when I was a kid. I still remember all the kids who were surprised to learn Catwoman was my favourite costumed hero when I was seven years old because she was thought of at the time as a villain. One would've asked back then "how come Batgirl isn't your favourite superhero?" Well, maybe the fact she was called "BAT" and "GIRL" to start with had something to do with that. Whereas the character was a clear female derivative of Batman, Selina Kyle--the Catwoman--was not, and that's something I found more empowering as a kid. I loved the fact that Selina was her own person, complete with her own ambitions and goals that sometimes conflicted with Batman's. She was also smart, witty, cunning, and funny. She played by her own rules, had her own moral compass, and was quite skilled at outsmarting even the superhero community. Let's also not forget she got to marry the Batman himself, and is the mother of the original Huntress! 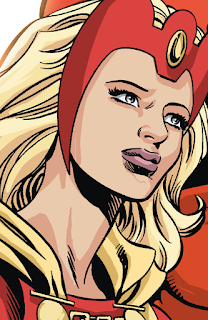 Having examined my favourite heroes with the best origin stories and childhood icons, it's now time to talk about the legacy heroes that got me invested in DC for life, starting Hippolyta "Lyta" Trevor, the original Fury. While I still have my reservations about Roy Thomas following his tactless response to the Iron Fist controversy, I will, however, forever defend his better creations like Lyta Trevor. If there is one thing Thomas did well during the Bronze Age was preserve the character integrity of DC's Golden Age heroes and he definitely had an impeccable knowledge of their core mythology--something that's become a rarity in recent decades. Given that, he is by far the writer who best developed the legacy of Wonder Woman in ways that actually respected her character. As the daughter of Diana Prince and Steve Trevor, Lyta made a name for herself by continuing her mother's work under a different codename and as a co-founder of Infinity Inc, the JSA's legacy team. (DC needs to bring her back.) 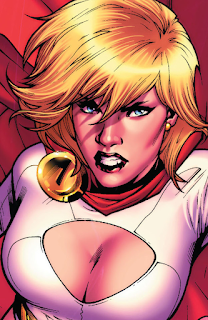 Getting closer to my obvious #1, I wouldn't have gotten here without my favourite Earth-2 Kryptonian, Kara Zor-L, better known as Power Girl. Originally created in 1975 by Gerry Conway, Wally Wood, and Rick Estrada as an Earth-2 doppelgänger of the Earth-1 Supergirl for All-Star Comics, Power Girl girl is hardly a carbon copy of the original character. She actually comes with her own personality, her own set of values, her own superhero identity, and her own personal goals that differ significantly from those of her Earth-1 counterpart. As the cousin of the original Golden Age Superman that appeared in 1938, Kara takes her cousin's legacy very seriously, but also wants to make it her own. She is a proud member of the modern Justice Society where she also met her best friend, Helena Wayne. Though Kara had a very strong start, her life was made complicated by the events of Crisis on Infinite Earths that erased her life and family. (Hopefully Rebirth fixes that and she gets life back!) 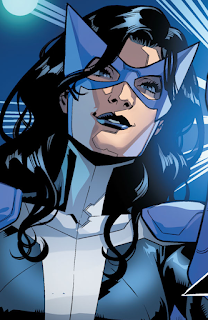 We all knew this was coming, but no one character ever held my interest in any of these other characters or DC the way Helena Wayne does. Not only does she have an existing relationship with each of the characters listed here, but there's so much about this character that's interesting that frankly DC should love her more than they currently do. Having debut in DC Super-Stars #17 in 1977, she is the daughter of the original Golden Age Batman and Catwoman. She is the original Huntress who carries the legacy of both of her parents. She is a lawyer and a Harvard University grad. She is a member of the Justice Society and an honorary member of Infinity Inc. She is best friends with Power Girl who make up the second generation Worlds' Finest team. She doesn't have a stellar love life, but she has Dick Grayson in her life. She's also smart, cunning, witty, and funny. What's not to love about Helena? Everything about her is perfection! DC definitely needs to bring this character back in Rebirth with her original history intact!
Posted by Diane Darcy at 21:37