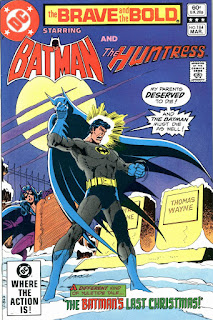 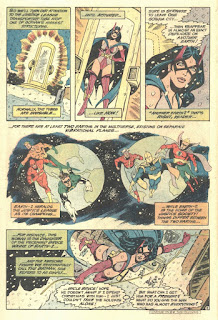 Today is Christmas Day for those who celebrate, and for the nerdy like myself, today is also "New Doctor Who Day"...at least it is in the United Kingdom. But...why should the British have all the fun? After all, Britain is not the only country in the world with a well known superhero who messes around with the timespace continuum in a stolen time machine. Turns out, the US has plenty of those as well.

Of course, the time traveller with a stolen time machine that's relevant to my blog is Justice Society villain Per Degaton, but I'm not here to talk about evil, time-travelling fascists. Least of all during a time when plenty of fascists are coming out of the woodwork to cause all kinds of damage in the real world as we speak. So instead, I want to talk about time-travelling heroes who inspire good in the world. Or in this particular case, a certain dimension-hopping heroine who simply wants to bring a little light into a man's otherwise dark world.

Just in time for the winter solstice, we simply couldn't end Helena Wayne's 40th anniversary celebration without discussing my favourite DC Comics holiday story of all time: the Huntress and Batman story featured in The Brave and the Bold #184 titled "The Batman's Last Christmas." Now, judging by the cover, it doesn't look like Batman is having a holly jolly Christmas and the Huntress looks very concerned for him. But despite appearances, it is not really a story centred on manpain or Bruce Wayne's usual brooding. Quite the opposite! It is instead a story about rediscovering the meaning of love, family, and friendship! Let's get right to it.


1. BRUCE WAYNE IS HIS BEST SELF 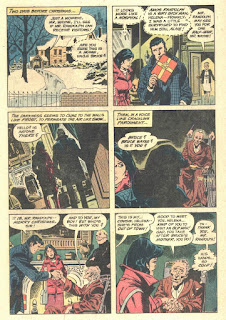 One of the best scenes in this story happens on the opening page itself: Bruce Wayne functioning in the role of Father Christmas to some kids spending the holidays in an orphanage. It is unknown whether Bruce looked at the Christmas lists of all the kids and bought them what they wanted (he certainly has the budget), but what he brought certainly brought joy to the kids in the orphanage as well as their caretaker.

Another great scene in this story happens just shortly after the Father Christmas scene: the one where he comforts his old friend Jim Gordon after feeling anxious the new Gotham Mayor will give him the boot once elected. Bruce reassures Jim that he has encountered worse enemies throughout his career and that if he was able to beat the odds against them, he will no doubt beat the odds against a supercilious new mayor as well. Jim is grateful for the kind words, but Bruce reassures him he only needed to be reminded of the good work he has done for Gotham, all of which is worthy of recognition.

It is not until Bruce goes on to take care of a favour for Jim that he finds himself in need of a hero of his own. At first, nothing appears to be out of the ordinary. Jim wants to recover some records from a mobster known as "Spurs" Sanders for evidence, which for Bruce is easy enough. Just look for a suspicious guy transferring the records, capture him, and recover the records. For the most part, that is exactly how it plays out. That is...until he looks at the records himself and discovers to his horror who's been on Sanders' payroll for years: his own father, Thomas Wayne!

As one could imagine, Bruce is shook by the whole ordeal. How could his own father have been bankrolling money to a mobster in the years leading to his death? What does this mean for Bruce who became Batman on the promise to both avenge his parents' deaths as well as prevent a similar tragedy from happening to other young children? Does this mean he now has to give up being Batman as he can no longer uphold the memory of a man who may have been a dishonourable human being this whole time? How does this change his own purpose in life? These are all questions that are firing in Bruce's mind at the same time, and for the first time in his life, Bruce is feeling conflicted and confused. For the first time, he doesn't know what to do or how to even respond. Enter his Earth-2 daughter, Helena Wayne, to help him sort that out!

2. HELENA WAYNE IS THE BEST SUPERHERO 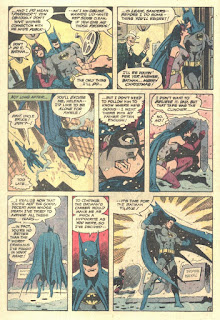 Helena Wayne's role in this story is an interesting one because she originally travelled to Earth-1 with no other plans other than to spend the holidays with her other dimensional father. Despite arriving in her Huntress costume, she wasn't expecting to fight crime alongside him. Her thought process was "I don't want to spend the holidays alone, and since my parents are dead on my Earth, I can spend them alongside someone else in my position: the Earth-1 version of my dad!" Needless to say, the Huntress was still needed.

Helena finds Bruce around the time he discovers his father's involvement with organised crime. In fact, it is Helena who ends up rescuing Bruce from death when the henchman he captures tries to use the opportunity that Bruce is distracted with the details of his records to permanently put him out of misery. This is the first time Helena functions as Bruce's hero.

The second time Helena saves Bruce is during the penthouse scene following his capture of the henchman in possession of the records Jim Gordon wanted earlier. Here, Bruce shares how shaken up he feels about the revelation of his father's involvement in organised crime. This news shocks Helena as well, however, she encourages Bruce to dig deeper. Between Earths 1 and 2, there is no way Thomas Wayne could've been the person funding organised crime as it doesn't fit his character. She takes this as a sign that something is clearly amiss.

The conversation at the penthouse leads Bruce and Helena to Thomas' former accountant, an elderly man known only as Amos Randolph who was also a close friend of the Waynes. While there, they discover the transactions on Randolph's books are authentic and match the records "Spurs" Sanders possesses. Wanting one last benefit of the doubt, Bruce and Helena pay a visit to "Spurs" Sanders himself to verify the authenticity of the transactions. Sanders provides the last bit of evidence Bruce needed to verify their authenticity: a taped recording of a meeting Spurs himself had with Thomas when he was still alive. Bruce's spirit is finally crushed.

For the remainder of the story, Helena tries to keep Bruce from plunging further into darkness. She stays with him even when Bruce tells her he wants to be alone for the time being and keeps an eye on him to make sure he doesn't do anything harmful to himself or to anyone else. In addition to needing to keep Bruce safe from himself, Helena also ends up protecting Earth-1's Gotham city in his place as the Huntress. This leads her to re-encounter the henchman from earlier who is this time Christmas shopping with his son. Because the henchman failed to deliver his records to "Spurs" Sanders earlier, he also has a mob hit on his head.

In a twisted bit of ironic fate, Helena ends up rescuing the same man who earlier attempted to kill her Earth-1 father. In seeing Helena rescue a criminal in order to prevent a child from losing his father so close to Christmas, this inspires Bruce to become Batman again. Regardless of whether his father was an honest man or a crook, the Batman stood for something more than just vengeance. The Batman also existed to protect other kids from suffering a similar fate to himself. This is the third time Helena saves Bruce.


3. THE IMPORTANCE OF FAMILY 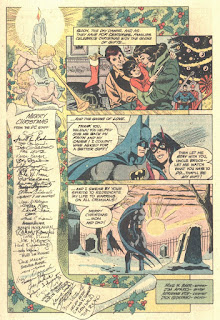 Bruce eventually goes on to learn the truth about Sanders' records upon digging deeper. Of course, he learns that despite the authenticity of their existence, there is one detail that gives away the identity of the "Thomas Wayne" present in Sanders' records as his former account: Amos Randolph's nervous tapping. This detail causes sigh of relief for Bruce, but he realises something more important: the importance of family.

The importance of family is--I would say--the most important takeaway from this story. It wasn't just Bruce realising his father was never a crook, but also learning that his parents were flawed human beings and not perfect individuals. It was also learning that their mistakes in life should not be the deciding factor of their characters or whether or not he should love them. Instead, he should judge them on their accomplishments and whether or not those accomplishments outweigh any errors they could've made. It was also learning that even when presented with evidence to the contrary, he should always question if those alleged actions match the characters of his parents.

The importance of family is relevant to Helena as well. For Helena, family isn't just the people who gave birth to her, but also the people she feels close to. And though she could've spent her holidays with Dick Grayson, Kara Zor-L, Lois Lane and Clark Kent, or even the entire Justice Society, she instead chose to spend that time with another member of her family that she knew would be spending the holidays alone: the Earth-1 version of her father.

Though this entry concludes my celebration of Helena Wayne's 40th anniversary, it is important to note that my coverage on Helena's character, history, and evolution won't end here. Six years of keeping this blog active, there are still more Bronze Age stories to cover, and I imagine Helena will be appearing in future DC stories as well if Tom King's current run on Batman is anything to go on.

I admit, I am in unchartered territory with the thought of Helena Wayne resurfacing in the main Batman book, in part because I've always considered her to be a Justice Society character despite being the daughter of Bruce and Selina, and very much expected to see her resurface with the Justice Society post-Rebirth. The other reason I feel like I'm in unchartered territory is because having her reappear in the main Batman book will increase her visibility in the mainstream media, which is good for the character, but it could also mean that all eyes will be on me moving forward.

I'll have to start updating lots of pages on this website, as well as get better at writing with a larger audience in mind. This is not a bad thing, in my opinion. It just means I have to get better at using more inclusive language to not make anyone feel excluded from the conversation. In other words, I have to be less of fangirl forward, lol.

Anyway, there is still the "End of the Year" reflection post to make for the last day of 2017, so look forward to that. Other than that, I hope everyone has a happy holiday season, and I'll hope to see all of you again next year!
Posted by Diane Darcy at 00:00