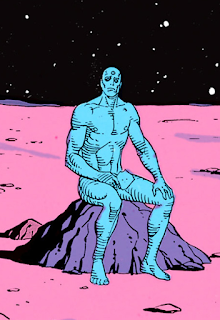 Ooff. 2017. To say this year was exhausting is understatement. From the continuously disastrous Brexit referendum in the United Kingdom to the political crisis between Catalonia and Spain, not to mention the ever cataclysmic farce that is Donald Trump in the US, to say I wanted so badly to be living on another planet this year is also an understatement. It's enough to say I completely understand why Watchmen's Dr. Manhattan went to Mars to find peace of mind, and why Valkyrie from this year's Thor: Ragnarok lived at the bottom of a bottle.

On the comics front, well...it's been a hit-and-miss kind of year for me, to be honest. For the most part, "Year Two" of Rebirth comics have continued to maintain their good quality with some misfires (Bryan Hitch's "Legacy" story arc in Justice League and James Robinson's run on Wonder Woman to name two), but on the whole, the stories have continued to be good across the board.

I would say my biggest disappointment of the year has been the lack of mobility on anything involving the return of the Justice Society. At best, a few Justice Society members such as Kent Nelson, Carter Hall, and Kendra Saunders have surfaced and others like Jay Garrick, Alan Scott, and Hourman have been teased, but nothing has pointed to an actual status quo on the Justice Society itself. We're already on the last day of 2017, so I think it's safe to say Doomsday Clock will be the comic that will reinstate them.

What were some comics I enjoyed this year? For me it was mostly Dark Nights Metal by Scott Snyder, Nightwing by Tim Seeley and now Sam Humphries, and Wonder Woman when the book was being written by Greg Rucka and Shea Fontana. Out of the three, my guilty pleasure this year has been Dark Nights Metal by Scott Snyder precisely because it catered to my tastes as a fan of DC's multiverse. Although it didn't end up visiting any of the DC Earths I'm heavily invested in (pre-Crisis Earth-2), we did learn new things about the origins of the current DC multiverse that could pave the road for future stories. The science nerd in me especially enjoyed the nods to Superstring Theory and Einstein's Relativity Theory.

Of all the Dark Nights Metal tie-ins, I enjoyed the one-shot Batman: Lost the most because it examined both Batman's seven decade history and his psyche as a character. I particularly liked that the one-shot revisited Batman's first story in Detective Comics #27 from 1939, "The Case of the Chemical Syndicate." Though it didn't retell that story through a modern lens, it did reinterpret its place in the larger Batman mythology and history, implying that Barbatos (the primary villain of Metal) is the origin of Batman and always has been since the beginning of Bruce's journey in 1939. I found this detail very intriguing because it provides a very different perspective on Bruce's Golden Age mythology that could even shed new light on the fate of his daughter, the original Helena Wayne Huntress. It does have me wondering if this detail will be addressed in a later story, especially since the pre-Crisis Earth-2 Dick Grayson was also briefly seen in Nightwing #17 published months earlier.

On the subject of Batman, I'm in a very weird place with Tom King's run on Batman. On the one hand, I tend to enjoy his writing more when he writes character-centric stories, but find his writing less engaging when he attempts to do plot-driven narratives. I feel his writing is at its strongest when he focuses on characters as opposed to coming up with complicated plots that are supposed to lead to some meaningful consequence for the affected character(s). This was the primary problem with "The War of Jokes and Riddles" where character motivations were very poorly established leading to problems with plot build-up, character use, and an even weaker denouement. Contrast this with the more character-centric Batman Annual #2, and you wouldn't think these two stories were written by the same author. The latter in particular leaves you in tears.

On the overall direction of Tom King's Batman, I fully support his decision to marry off Bruce Wayne and Selina Kyle. Not only because its reinstatement is four decades overdue (not even Lois and Clark waited that long), but also because Batman and Catwoman fans have waited seven decades to see this story properly told, and they deserve to get that story. Despite the fact that a married Bruce and Selina was already mainstream canon on DC's pre-Crisis Earth-2 that contained DC's Golden Age continuity, this is the first time that we actually see Bruce and Selina's engagement and subsequent marriage happen in the present. Originally, their marriage was set in the past and was used as an origin story for their daughter, Helena Wayne, to become the Huntress. Their pre-Crisis marriage was rarely given any attention beyond their daughter, so it is fair that Bruce and Selina fans get a proper wedding story that actually centres on them.

Other problems that will arise from her simply being born to the Prime Earth versions of Bruce and Selina is that it's going to profoundly change her relationships to the Earth-2 Power Girl and the Justice Society because she will now be a existing as a child of her parents. Her existence will now be about the growth and character development of her parents, which is a significant step backwards to what Helena Wayne is supposed to be as a character, which is to be the hero of her own story. This now leaves very little of Helena Wayne's original core concept intact, effectively rendering her a brand new character who is Helena Wayne in name only.

Of course, the easy solution to the Helena Wayne problem would be to simply reinstate the pre-Crisis original with Power Girl and the Justice Society on Prime Earth so that she doesn't lose any of her conceptual originality as a character, which would also free up Tom King to tell the Batman and Catwoman marriage story he wants to tell. At least by getting the pre-Crisis Huntress back, we Justice Society fans will have the Helena Wayne that we want, complete with her friendship with Power Girl and Justice Society membership intact. That's really all I want if I'm honest, and if that's what we get in 2018, that will be enough to make me happy.

Having said all that, I really don't know what to expect in 2018, but my New Years resolution will be to continue to spread interest in Helena Wayne as the Huntress, her friendship with Power Girl, and the Justice Society. Since those are the DC properties I cover anyway, that's not really a surprise. I really do like these characters, I like revisiting their older and newer stories, I like discussing their history and evolution. All of that is interesting to me and I would like to see these characters be given the care and respect that is always afforded to DC's other mainstream characters. There's a lot that I love about the original Helena Wayne Huntress in particular that I don't want to see jettisoned to accommodate two cosmic reboots, and I especially don't want to see her lose her friendship to Power Girl and Justice Society membership. All of that enriches her character, in my opinion.

I will definitely continue to talk about and review Helena's pre-Crisis stories, I'll continue to update fans on the status quo of the character, as well as that of Power Girl and the rest of the Justice Society. I'm also hoping to see the return of the original Infinitors as well. Probably moreso than the Classic Justice Society, they are the characters that have been consistently hurt by cosmic reboots, so I do hope DC does better by them this time around. Would love to see Lyta Trevor as Fury again since she upholds the legacy of the Golden Age Wonder Woman who has stronger ties to the Justice Society.
Posted by Diane Darcy at 00:00