The Best of the Huntress: Wonder Woman #309 Review 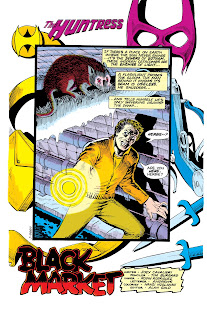 Summary: It has not been 24 hours since Helena Wayne escaped from Arkham Asylum with her sanity still (largely) intact, and already she's come across her newest, deadliest case: the human trafficking of infant children in the black market. Just who exactly is running this sick trafficking ring and why? Why babies of all people? It was the kind of unexpected turn for the worst that sent chills down the Huntress' spine when she discovered the routine drug bust she thought she was making revealed a much more sinister operation. As the Huntress doubles down on her use of violence to get to the bottom if this new sick case, an equally sinister figure known as the Earthworm lurks in the shadows, looking to compensate for lost and damaged goods. Who is this mysterious Earthworm and how far deep into Gotham's underground must Helena Wayne dig to unearth the monster in question?

Review: This chapter admittedly opens up like a brand new story arc, but it's really a continuation of the one that started in the previous issue. Whereas the last issue introduced a brand new antagonist for the Huntress in the form of Nedra Borrower, this "newest" chapter introduces the main antagonist that will be at the heart and centre of this story moving forward: the Earthworm. Though this chapter is more setup than a continuation of the previous issue, it does reveal something new about the Huntress as a character, which is the extent with which she is willing to use violence when the victim in question happens to be a child.

Whereas Helena manages to stay calm and collected in most situations, when children are caught in the fold, she is easily provoked in very unprecedented ways. Within the context of this story, Helena found herself mercilessly beating the people attempting to sell an infant child to some unknown buyers to the point of unconsciousness. Though Helena's feelings of anger and repulsion are valid, the important question here is whether Helena is written as responding to the situation in a way that is actually in character for her? 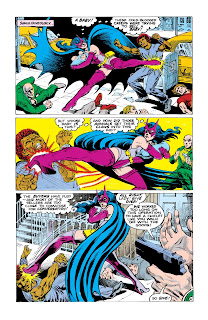 Given that Helena initially thought she was doing a drug bust, she was very much not expecting the "goods" being exchanged to be a living, breathing infant child. I therefore don't think it was unrealistic for Helena to respond to the initial shock the way that she did, nor do I think it was out of character for her to violently assault the sellers as she did. I think anyone in her position would've done the same.

Another thing that is revealed about Helena in this chapter are the methods she is willing to use to get information. Since Helena is already feeling angry and repulsed by her discovery of infant trafficking, she is hardly in a merciful state of mind, and this is easily reflected in the fact that she keeps using her heels to inflict serious injury. When it came to interrogating the last remaining guy that she hadn't beaten unconscious, she used the threat of violence to extract crucial information from him such as who the parents of the baby were and who was the person doing the abductions.

I have to say Helena's characterisation in these seven short pages mirror closely to that of her father's (the original Golden Age Batman) when he first appeared in comics in 1939. You see that same level of rawness to her fighting style that you see with the Golden Age Batman in his earlier stories, particularly from his first year of publication. You see the same degree of passion and ruthlessness. While Helena doesn't exactly resort to the same brutal methods her father used in his first outings as Batman, she isn't playing this coolly either. She does look like she is one heartbeat away from tossing a man over a window with a rope wrapped around his waist, threatening to cut the rope if he refused to cooperate (something her father actually did in Detective Comics #28).

With Helena's characterisation in this chapter mirroring her father's earlier characterisation, you have to wonder if this is a deliberate choice on Joey Cavalieri's part. Is he trying to remind the reader of Helena's origins as the daughter of the Golden Age Batman? Does he especially want us to remember that the Golden Age Batman was a more ruthless avenger in his prime than his more light-hearted Silver Age counterpart? Or is Joey Cavalieri simply validating Harry Sims' earlier concern about Helena's addiction to violence? Is it all of the above? If so, what is Joey Cavalieri trying to tell us about Helena as a person? Is her behaviour a case of nature vs nurture, or both?

These are all questions Cavalieri appears to be setting up for further exploration in future chapters, even future story arcs. This one story in particular about infant trafficking appears to be about testing Helena's limits, both as a person and as a costumed avenger.