The Best of the Huntress: Wonder Woman #310 Review 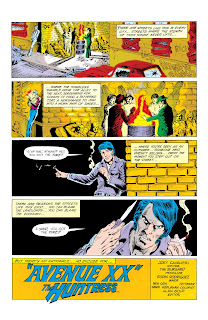 Summary: During a routine drug bust, the Huntress discovered to her horror a human trafficking ring that sells infant children to people in the black market. Determined to shutdown this deadly operation once and for all, the Huntress deduces that the baby she rescued was abducted near Avenue XX (a well known site for drug activity) after a medical examination revealed that the baby is deaf presumably due to her mother being a drug addict while pregnant. The Huntress goes hunting, but she isn't the only one. In another corner of Gotham, reporter Nedra Borrower is looking to seek her teeth into the Huntress by using her media presence to turn the public against her.  (Heh! Quis custodiet ipsos custodes?)

Review: It is St. Patrick's Day on the west side of the pond, though luck is not exactly on Helena Wayne's side as Nedra Borrower uses the news media to turn the public against her. I always want to crack a "who watches the watchmen?" joke every time I get to this story arc because of how much that idea has become a trope most notably post-Crisis after Alan Moore and Dave Gibbons' Watchmen became an unprecedented hit in 1986.

However, this Huntress story by Joey Cavalieri was published in 1983, just three years prior to DC's publication of Watchmen, so I guess Alan Moore wasn't the only one thinking about this question in that same decade. It appears the Italian-American Cavalieri was as well, especially considering that the famous phrase "quis custodiet ipsos custodes" originated in the mother country. (And we all know how much Joey Cavalieri loves to to make references to Italy in some capacity before he eventually rebooted the Huntress as the Italian-American Helena Bertinelli in 1989.) 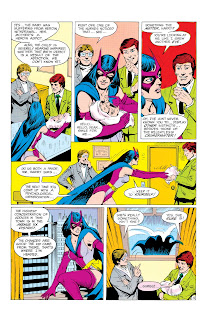 Getting back to discussing the story itself, I would say this is probably the story where Helena Wayne's life starts to spiral downwards. On one corner, you have the reporter Nedra Borrower (who returns this issue) conspiring to destroy her reputation to the public by asking a very basic, yet important question: can the Huntress really be trusted? Though Nedra obviously has ulterior motives, preying on that primal fear in Gotham's citizens especially after living with the presence of Batman almost half a century earlier is how she gains support against Helena.

It is, after all, a valid question. Why place trust in unsanctioned vigilantes over actual authorities when those same vigilantes also get people killed? Helena's father certainly left bodies behind in his earlier years as Batman, and no one batted an eye. Though Helena has not left half the body count as her father in the seven years that she's been patrolling Gotham's streets as the Huntress, she has nonetheless still left some bodies behind with her most recent casualty being the Undertaker--a "victim" Nedra no doubt latched onto to gain the public's support. Now she's just waiting for the Huntress to make her next move to continue her case against her.

On the other corner of Helena's quickly downward-spiralling life is Helena herself. Since her deadly fight with the Crimelord a year earlier, followed by her deadly case against the Undertaker, Arkham Asylum, and now her latest case against human trafficking, Helena hasn't been feeling alright. She started doubting herself when she was captured by Prof. Fether and Dr. Tarr, who shot her with a highly potent hallucinogen that forced her to confront all of her deep-rooted fears. If that wasn't bad enough, her relationship with Harry Sims has continued to deteriorate with him continuously shaming her for every mistake that she makes as the Huntress.

With all of those experiences piling against Helena Wayne, it's hard to blame her for not keeping her cool lately. Within the context of this chapter, Helena does manage to show her softer side in the presence of the infant girl she rescued in the previous chapter, which doesn't go unnoticed by Harry. The one moment Helena shows vulnerability, Harry immediately cracks a sexist "maternal instincts" joke which obviously upsets Helena. Helena then wastes no time "getting back on task" following this insult. (More proof, in my opinion, that she should leave this bloke for someone better.)

The rest of the story sets up for Helena's eventual confrontation with the Earthworm. Just what exactly he brings out of her is the discussion for the following chapters.