The Best of the Huntress: Wonder Woman #311 Review 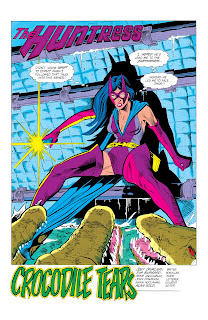 Summary: The Huntress has gotten a lead on the baby trafficking case, though the place it takes her isn't exactly sanitary: the sewers! Though she doesn't find the wormy-looking person she was looking for just seconds ago, she does, however, come across the Earthworm's pet alligators in the sewers. After a fight to the death against the ginormous reptiles, the Huntress manages to subdue them, much to the surprise of one of the Earthworm's henchmen.

The Huntress proceeds to violently interrogate the henchman, who reveals the Earthworm's real name to be Herbie and as the man responsible for kidnapping all of the infant children being sold into the black market. The Huntress asks the henchman to deliver her threatening message that she'll be back for him.

In another corner of Gotham, reporter Nedra Borrower continues her own crusade against the Huntress, this time acquiring an accomplice in the form of Terry Marsh--a local politician--who also appears to be her lover. Together, both Terry and Nedra seek to manipulate the public's perception of superheroes through media spin. Their endgame? To rile enough people to pressure Gotham's lawmakers into banning superheroes.

Review: Once again, this story dives into "Watchmen before Watchmen was a thing" territory in that it once again revisits the question of "are superheroes more harmful to society than they are helpful?" That is certainly the premise of Nedra Borrower's story arc, but with a far less sincere agenda. Writer Joey Cavalieri made it clear very early on that Nedra's personal vendetta against the Huntress is less about what the heroine has actually done and more about getting herself the recognition she thinks she deserves by destroying the woman she feels is stealing her spotlight. I would argue this makes Nedra more similar to Lex Luthor as an antagonist. 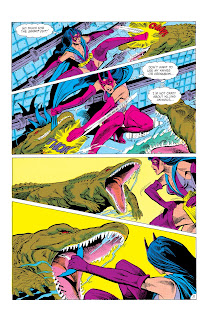 Like Lex, Nedra feels like she has worked very hard all her life to carve her place in the world and deserves recognition for her achievements. Like Lex, she also resents the attention the Huntress gets from the public because she feels that level of admiration is unearned. In the same way that Lex feels Superman has never worked for any of the things he has in life (especially his powers and public admiration), Nedra similarly feels the Huntress has never worked for the things that she has. Like all superheroes, Nedra thinks the Huntress had all of her gifts handed down to her.

In the same way that Lex is very calculating and is quite skilled at manipulating public perception to his favour, Nedra also proves herself to be very skilled in this regard by preying on a very basic, yet valid fear: can superheroes really be trusted? After all, they are not sanctioned by any official authority, and as people who operate outside the law to carry out their own brand of justice, they fit the legal definition of vigilantes and are thereby illegal. Nedra uses this technicality to gain the support of the public and seeks to further validate her spin by sniffing out any mistake that the Huntress makes. It was enough for her to gain the support of a local politician who is also implied to be her lover. The question now is, is Helena herself going to fall into Nedra's trap by unwittingly proving her point?

When we see Helena in this story, she is by no means soft on the henchmen she interrogates. She first intimidates him by pinning him to a wall in the sewer with her daggers and uses physical violence to get him to talk. When he refuses to answer her questions or takes too long to give her an answer, she growls at him and hits him in a very similarly to her father when he first started out as Batman. This then poses the question of "is Helena's aggressive behaviour the consequence of lived experience, or has she always been like this and we're just now seeing this more violent side to her character rise to the surface?"

There's no denying that Joey Cavalieri presents Helena Wayne from a very different perspective than what we're used to from, especially from her co-creator, Paul Levitz, and her subsequent writers, Gerry Conway and Roy Thomas. Whereas each of the aforementioned writers have always presented Helena as complex and sometimes morally grey when it comes to criminal deaths, they always reassured the reader that Helena has a strong moral compass and is an unwavering pursuer of justice. She always fought in favour of equality and always does what she does because it's the right thing to do. 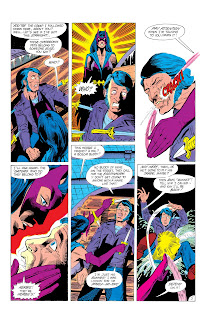 Joey Cavalieri still brings all of these qualities to the forefront but also presents them under a very different light. I would honestly argue he has more of a deconstructionist approach to the character in that he still builds on the foundations Levitz established but also challenges what the reader accepts about the character. Sure, Helena does what she does because it's the right thing to do, but what exactly does that mean to her?

Does Helena's idea of right and wrong come from an objective point of view or is there bias involved? How unbiased is Helena when she evaluates every situation and carries out vigilante justice? What do her actions reveal about her when observed objectively? Is Helena really an agent of justice if she has to use violence and intimidation to make headway on her cases? Do her actions reveal a psychologically tormented woman who feels she won't be taken seriously if she's not in any way threatening to the people she goes after, especially male criminals? Is any of what Helena does good for her own personal well-being and the well-being of Gotham City at large?

All of this goes back to the central question Nedra is preying on. Whether or not Helena succeeds in giving Nedra precisely what she wants to finish destroying her is exactly where the next chapter picks up. However, we'll be picking up on this story a month from now, because starting next week, we're going to be shifting focus to Helena's parents, the Golden Age Batman and Catwoman! For the month of April, we'll be discussing the original BatCat marriage just before Tom King marries off the Prime Earth couple!