The Best of the Huntress: Wonder Woman #318 Review 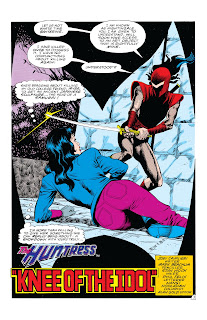 Summary: Myra Liebe has been murdered by a mysterious new foe, and it is up to Helena Wayne to put aside her own holiday to resolve her college friend's murder. Just who is the Nightingale and what does she want with an ancient Japanese statue? Why did its procurement cost Myra Liebe her life? What is Myra's relationship with art dealer Alfred Seraphin? Could he have had something to do with her death? These are all questions the Huntress must come to the bottom of, even if it means risking becoming the Nightingale's next victim!

Review: This is undoubtedly one of my favourite Huntress stories of all time, in part because it indulges my absolute love for Japanese culture on one hand, and on the other, it offers the reader the opportunity to see how Helena Wayne handles dangerous situations out of costume. Couple that with an Agatha Christie-style murder mystery, and there's a recipe for a good story.

One of my favourite scenes that plays out in this second instalment of the Nightingale story is the very first one the story opens with. It follows up on the ending of the last issue where the Nightingale ambushed Helena Wayne as she was leaving from her meeting with Myra's art dealer, Alfred Seraphin. This opening scene is pretty significant as Helena Wayne was completely unprepared to encounter the Nightingale so soon, especially since she was lost in thought trying to piece together possible scenarios that led to Myra's death. As such, she was caught off guard, which led to my second favourite moment in this scene: 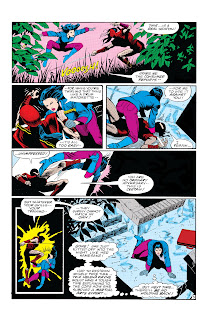 How does Helena Wayne handle herself when she is attacked in her civilian identity and can't sneak away to change into her Huntress costume?

Though this is our second time seeing the Nightingale, we already learn plenty about her as a villain in just the two appearances she's had so far: she is a skilled ninjutsu artist who can match Helena Wayne in her talents as a fighter. Like the Huntress (and Batman at that), the Nightingale knows how to use stealth to her advantage and knows when to catch her victims off guard. No one ever sees the Nightingale coming, including other skilled fighters like Helena herself despite being a frequent user of those same tactics.

Another reason this scene is pretty significant is because it forces Helena Wayne to quickly think her way out of this dangerous encounter without the aid of her Huntress arsenal. How much of a fight can she put up without tipping the Nightingale off on her secret identity as the Huntress? How much of a beat-up can she take before it can become fatal for her? These are all the thoughts that cross Helena's mind as she dodges the Nightingales attacks while being extremely careful not to fully demonstrate her skill as a fighter.

In addition to not wanting to tip off the Nightingale on her other identity as the Huntress, Helena similarly did not want to deal with the hassle of explaining to LAPD how a young female lawyer from Gotham was able to subdue a highly skilled martial artist. While being from Gotham alone should probably be reason enough for a young female lawyer to want to learn how to defend herself against dangerous situations and dangerous people, this is still Los Angeles. A city with its own fair share of dangerous crimes that Gotham would probably not even blip their radar. 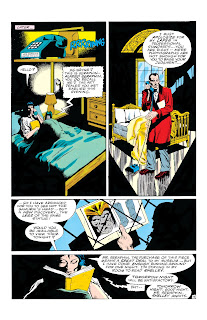 From the LA perspective, Gotham would probably be the kind of "obscure city" from the East Coast that no one on the West Coast has heard of and would probably even lead people to ask "where?" Even if Gotham has famous criminals like the Joker, Two-Face, and Scarecrow, complete with colourful crime fighters like Batman, Robin, and the Huntress, the fact is "who in LA cares about Gotham when LA has its own problems?" For Helena Wayne, it makes perfect sense to be safe than sorry, and avoid any situation that could lead to her be hounded with questions from LAPD. (Of course, she could just say she's from LA, but background checks.)

Another thing I enjoyed in this particular instalment is that we learn a bit more about Helena Wayne's personal interests, such as her love of Kabuki theatre and classic English literature. Though the story doesn't specify if she is reading Mary Shelley (the author of Frankenstein) or her husband Percy Shelley, the fact that she mentioned Shelley alone made me smile. Though I'm not so much a fan of Percy Shelley's work as I am of his wife Mary, my mind still likes to think that Helena is a fan of the latter and Frankenstein is one of her favourite books. (It certainly is one of mine!)

One last thing I enjoyed about this issue is that writer Joey Cavalieri follows up on another character we met in the previous issue, Tracy Heather. In the previous issue, Tracy had presented herself to Myra and Helena on the train they were on, claiming to be an aspiring actress. Helena was suspicious of this woman from the get-go as she felt she was "very well dressed" for a woman who rushed onto a train at the last second.

In this issue, Helena meets Tracy again at the Kabuki theatre and once again feels suspicious of the woman, again revealing that she may have stowed away on that train. It turned out she wasn't wrong to suspect something was off about Tracy, but this admittedly leads me to my one complaint about the story: Joey Cavalieri revealed the identity of Myra's killer way too soon. 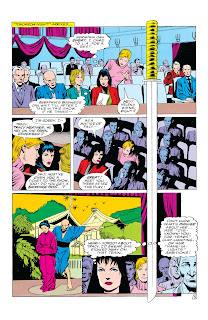 No, it isn't Tracy (though she still has a secret), but Cavalieri still revealed the Nightingale's identity to the reader too early, which ruins Helena Wayne's unmasking of the villain in the issue that concludes this arc. The one thing that bothered me most about this was Cavalieri emphasising just how many times the villain encountered Helena in their civilian identity. This detail was meant to tip off Helena on the villain's identity. The problem is it tipped off the reader as well, and confirmed it for the reader in the panels that followed, which ruins the intrigue.

While the villain may have learned a lot about Myra, her career, and her friendship with Helena Wayne during the time they interacted in the party car in the previous issue, even if the villain "knew" about Myra's murder on the train, they still shouldn't know about Helena's plans to resolve her murder. Even less so when Helena Wayne is the type to avoid media attention in her civilian identity.

The murder itself would've been public enough for the villain to know something of the aftermath, but not the details of Helena's own plans, especially if he claims to have read about them in the newspaper. The "I read about it in the news" bit could've been easily used by Helena in the next issue to verify "I didn't stick around to speak to the cops or the news media, which is how I figured out who you were." That would've been an epic reveal that no one would've easily caught onto!