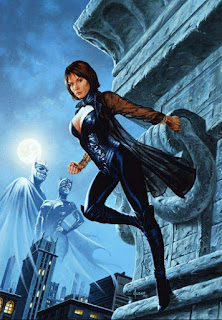 For almost a year now, DCTV fans have known that a CW adaptation of Crisis on Infinite Earths was on the horizon as the big Arrowverse event for 2019. What no one anticipated was the network going all out with the event by inviting every actor who has ever portrayed a DC Comics character either on television or on film to participate in the crossover.

From Kevin Conroy who voiced Batman in various animation shows and video games, to Burt Ward who played Robin in the 1966 Batman show, to Smallville's Tom Welling and Erica Durance, and even Brandon Routh from the 2006 Superman Returns film reprising their roles, Crisis on Infinite Earths is increasingly becoming a love letter to DC in other media. Today, the 2002 Birds of Prey star Ashley Scott confirmed on Twitter that she will be reprising her role as The Huntress for the event:


Yes, you read this right. Ashley Scott will be returning as Helena Kyle for the event, which makes sense when you consider that the original Helena Wayne Huntress was a major character in that story.

Mind you, Crisis did not end well for Helena Wayne as that was the story that retconned her out of continuity and facilitated her later retooling into the more familiar Helena Bertinelli iteration. However, since original Crisis writer Marv Wolfman will also be co-writing the television version, here's to hoping he'll have a heart this time and won't kill off Batman's daughter a second time.

As for the actual character Ashley Scott portrayed in the Birds of Prey TV show, her Huntress was a wildly different take from the comic book version of Helena Wayne. Whereas her Huntress had cat-based superpowers from her mother, the original Helena Wayne Huntress was just a normal, crossbow-wielding human being with a super-powered best friend in the form of Power Girl.

Considering it's been 16 years since the last episode of Birds of Prey aired, here's to hoping Scott's character will now be going by her character's more iconic name of Helena Wayne, complete with a Huntress costume that resembles the more iconic look. I, for one, would love to see a live action version of the classic Huntress costume once again!

Needless to say, I'll be tuning in this December. And who knows! With Helena Kyle appearing in a major television event this year, coupled with teased future appearances of Helena Wayne in the mainstream comics, 2019 may shape into a great year for Helena Wayne Huntress fans!