Justice League vs Doomsday Clock: The Journey Into DC's Past, Present, And Future Continues 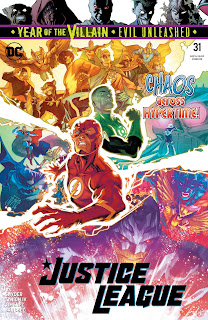 Today is the release of both Doomsday Clock #11 and Justice League #31, both of which have a unifying theme concerning the DC Universe's susceptibility to change, but have yet to offer any insights into its future direction. At the moment, both stories are offering their own interpretations for why the DC Universe changes the way that it does.

Doomsday Clock is arguing that the post-Flashpoint universe exists as a consequence of Watchmen's Doctor Manhattan doing his own experimentation on the DC universe and its characters. It also argues that something or someone had been manipulating the DC timeline long before he got there, resulting in multiverse-altering events such as Crisis on Infinite Earths.

To continue on that train of thought, Doomsday Clock similarly establishes that the main DC Universe does not actually exist as part of a multiverse, but is the metaverse that serves as the base template for the DC Multiverse. With the main DC Universe existing as a metaverse, any changes to that metaverse results in changes to the DC Multiverse in response. This seems to be a central idea Scott Snyder's Justice League picks on for his Justice Doom War narrative.

Last week, Justice League #30 split the team into three groups to recover pieces of the Totality found in the DC Universe's past, present, and future via Hypertime, allowing the Justice League to encounter heroes that defined those different eras. This week's Justice League #31 continues to explore what the DC Universe is, the role that Hypertime plays in shaping its history, and how that in turn gives birth to the DC Multiverse and its infinite possibilities.

The use of Hypertime in Justice Doom War is quite interesting in that it's being used in a way that gels two conflicting concepts that is the DC Universe and it's subsequent Multiverse. Originally, when the idea of Hypertime was conceived post-Crisis, it was established as a stream of possible timelines that branched out from the main timeline before merging back into it very similarly to smaller rivers merging back into a larger river. It was a way of explaining the DC Universe's conflicting history and it's an idea Justice Doom War uses to great effect. 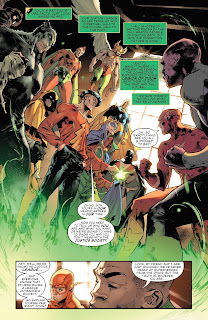 I would say the most intriguing thing about the use of Hypertime in Justice Doom War is the very fluid nature in which it is being explored. It is careful to acknowledge the most identifiable aspects of a group like the Justice Society of America without cementing the team to any particular era such as pre-Crisis or post-Crisis.

Instead, the main idea of the team is present at the forefront, along with the fact that they are the face of DC's Golden Age. Since they are currently existing in Hypertime, they are—for the time being—only there as a possible timeline that can be merged back into the main DC Universe once Justice Doom War concludes.

Another thing that's fascinating me about the use of Hypertime in this week's Justice League is how the DC Multiverse is factoring into the concept of Hypertime. Specifically, it seems to be implying that the 52 Earths making up the current DC Multiverse are timelines that branched out of the main DC Universe that never merged back into it, allowing them to evolve into parallel Earths.

The biggest evidence we saw of this in Justice League #31 was on the page that—spoiler alert—depicted Brainiac collecting fragments of Hypertime into bottles. One of those fragments happened to be the post-Flashpoint Earth-2 as it existed post-Convergence that was subsequently erased by Fury with her Pandora Casket at the conclusion of Earth-2: Society.

This is very interesting to me for two reasons. The first is that it reinforces a behaviour we already observed from Brainiac during Convergence where he collected cities from previous DC continuities and placed them outside of time and space. When he released those fragments of past DC continuities back into their respective timelines, they evolved into the current DC Multiverse. 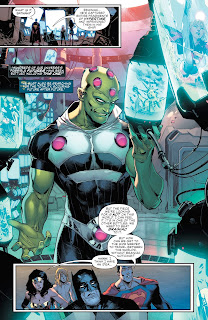 If the post-Flashpoint Earth-2 started out as a possible future for the Main DC Earth in Hypertime as explicitly shown in Justice League #31, then the same was probably true about the pre-Crisis iteration by the time multiple Earths (including pre-Crisis Earth-1) began to surface.

In every case, the larger narrative appears to be building towards the central idea DC Universe Rebirth has been riding on since 2016: every DC story you ever read still happened and every DC character you ever loved still exists somewhere, some place. All of these stories and characters who have shaped DC's rich history and legacy throughout the decades still matter and will pave the road for DC's future.

Exactly how this idea is going to pan out in Justice League in particular is what's keeping excited about this story arc every month. We're already starting to see the major pay off many of us have been waiting for since 2016, and I have a strong feeling we're going to be seeing all of our favourite characters again—from pre-Crisis to post-Crisis to now—for the first time since Convergence in 2015.

If anything, this feels like it's shaping up to be what Convergence should've been, but is being handled in a way that will actually matter towards DC's future. I'm especially looking forward to seeing what will get restored by the end of this event and what stories this will lead to moving forward.
Posted by Diane Darcy at 00:00