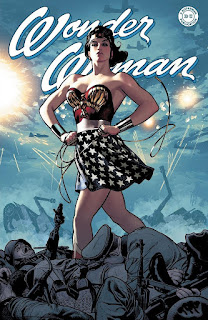 Wonder Woman #750 came out this week, and as an 80th anniversary special, it is everything you can hope for in celebration of the famous Amazonian princess. It concludes Steve Orlando’s ‘Wild Hunt’ storyline from the main title, and features a couple of short stories from various men and women in comics, especially ones who have contributed to the narrative of DC’s feminist icon in some capacity.

All featured stories are heartwarming reminders of everything Wonder Woman represents and all that we can aspire to be if we followed her example. Some of my favourite stories in this special include the ones from Mariko Tamaki and Elena Casagrande, Gail Simone and Colleen Doran, Greg Rucka and Nicola Scott, Marguerite Bennett and Laura Braga, Vita Ayala and Amancay Nahuelpan. The one recurring theme in most of these stories is that it's okay to be flawed. Just learn from your mistakes, learn to be kind, and always strive to be better.

This main recurring theme incidentally builds up to the final story in the special that debuts the new Earth-5G timeline: ‘A Brave New World’ by Scott Snyder and Bryan Hitch.

There's a lot I love about the story, particularly the optimistic tone of DC's Golden Age, coupled with the acknowledgement of the conflicts that were taking place in the late 1930s leading up to the Second World War. A detail that in many respects defined DC's actual Golden Age. I especially enjoyed seeing Wonder Woman wearing a version of her original Golden Age costume, making an entrance that homaged both her original first appearance in Sensation Comics #1 (1941), and even the 2017 Wonder Woman film. Thematically, it even reminded me of 2015's Legend of Wonder Woman by Renae De Liz and her husband Ray Dillon, whom I lament did not have a short story featured in this anniversary. (They did in the 75th anniversary special.)

In terms of having an actual narrative, there really isn't much to say on this front, at least not yet. It's very much just accomplishing its job of setting up the new status quo DC will be following moving forward. Admittedly, I'm still not sold on making Wonder Woman the first superhero, in part because her existence is still owed to DC's original superhero, Superman, and in part because it feels disrespectful to the Shuster and Siegel families, whom DC fought to retain ownership of their character. On those two points alone, I feel that Superman should always be DC's first superhero and should never be robbed of that unique status. Nonetheless, I'm going to reserve judgement until I know more about what the new timeline will entail. 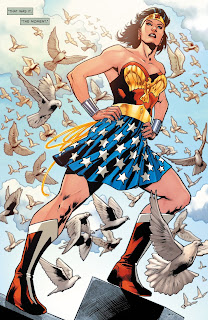 As I mentioned on previous posts, we only know one draft of the timeline DC mapped out and presented at NYCC last year. Some details may have changed since then. What I do know is that if Crisis on Infinite Earths is still canon in the new timeline (and I don't think that's going away any time soon), the multiverse will still have to be a thing in order for the new timeline to lead up to it, complete with subtle and major differences.

Only time will tell, of course. As mentioned previously, I am cautiously optimistic. One thing I am definitely excited about is the return of the more classic Justice Society (on possibly a more classic Earth-2) and the teased return of the original Helena Wayne Huntress. (I just hope Tom King doesn't mess that up...)