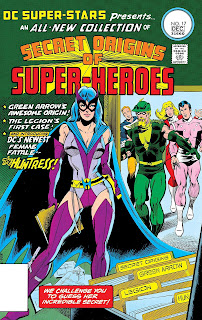 DC SUPER-STARS #17 FACSIMILE EDITION
Written by PAUL LEVITZ, DENNIS O’NEIL, and JACK C. HARRIS
Art by JOE STATON, BOB LAYTON, MIKE GRELL, JUAN ORTIZ, and others
Cover by JOE STATON and BOB LAYTON
This 1977 issue features the debut of Huntress, the untold origin of Green Arrow, and an early adventure of the Legion of Super-Heroes! Offered to coincide with the Catwoman 80th Anniversary 100-Page Super Spectacular #1.
ON SALE 05.05.20
$4.99 US | 48 PAGES | FC | DC

On Friday, 17 April 2020, DC announced a new distribution plan to start resuming a limited release of new comics as early as 28 April. The new release dates will also apply to the digital versions of their comics as well.

Amongst the titles that will be released on 28 April include Daphne Byrne #4, The Dreaming #20, Batman Giant #4, and reprints of Batman #89 and Nightwing #70.

Amongst the titles that will be released on 05 May include Batman and The Outsiders #12, The Flash #753, The Green Lantern: Season Two #3, Hawkman #23, House of Whispers #20, Joker/Harley: Criminal Sanity #4, as well as the facsimile edition of DC Super-Stars #17.

DC has not yet announced when they plan to release Catwoman: 80th Anniversary Special #1, however, it's probably safe to assume DC will release it sometime in mid to late May since it was already sent off to the printers over a month ago.

Still, the fact that DC Super-Stars #17 is getting released on the first week of May is good news for Helena Wayne Huntress fans as that is still my top pick for introducing new fans to the character. It's definitely worth picking up if you don't already own a copy and want to get to know Helena Wayne in her original incarnation. The other reason to pick it up is because the original pre-Crisis version of Helena Wayne is also the version Doomsday Clock #12 teased as returning in the new Earth-5G timeline.

DC Super-Stars #17 is also collected in The Huntress: Origins trade which also contains the first four years of pre-Crisis Huntress stories. The Huntress: Origins is also still available in both print and digital formats, and is still my #1 trade for Helena Wayne, along with All-Star Comics: Only Legends Live Forever. All of the most important details you need to know about Helena Wayne's history before Earth-5G starts is contained in those two volumes.