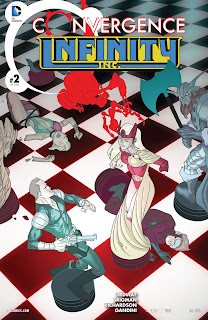 Summary: Since the majority of this issue is the battle between Infinity Inc and the Dogs of War, this is going to be a very short summary since there's not a whole lot to describe about the battle itself, and there aren't as many individual character story arcs here like there were in issue #1. On the bright side, however, there is still a longer detailed review ahead!

Picking up where issue #1 left off, the Dogs of War struck first and Infinity Inc's team leader, Sylvester Pemberton, was immediately incapacitated. Seeing this as their cue to attack, Lyta Trevor briefly assumes the leadership hat and commands the rest of the Infinitors to attack, prompting them all but Brainwave Jr (who is catatonic) to charge for battle.

Lyta Trevor wastes no time in doing some kicking some serious Dog of War arse while Sylvester Pemberton attempts to flee his opponents, only to end up getting paralysed by Manta's powerful beam. Jade saves her leader from his two pursuers and quickly gets him to safety. Lyta and Nuklon take on both Sun Hawk and Starkad, and the paralysed Silvester is left at the mercy of Jonah Hex who threatens to shoot him. He is subsequently rescued by Silver Scarab who gives him to Norda for safety.

Jade is quickly brought down by a group of citizens from the Hex Timeline and is subsequently rescued by her brother, Obsidian, who incapacitates Stiletta. Jade starts having hallucinations of her father, and Obsidian quickly gets her out of the fight before more people gang up on her.

At some point during the brawl, an earthquake ensues and a fusion generator emerges from the ground. Both Sylvester and Norda bring the now conscious Brainwave Jr to the fight and his intervention incapacitates the Dogs of War with an intense brain attack. This attack weakens Brainwave Jr as it used all of his remaining strength. Obsidian wants to take advantage of the fact that the Dogs of War are down to end the battle and 'satisfy' the rules of the game, but he is stopped by his sister, Jade.

A truce is reached between the Infinitors and Dogs of war when a space ship arrives to force both teams to surrender, or be annihilated. Both parties depart and the Infinitors make their way to Earth-2 Metropolis. Just before they reach their city, they watch in horror as the remnant of their world goes up in flame. They are met by Doctor Fate who escorts them to another location on the planet. (Exactly what happened here, I'm not sure, but hopefully Justice Society of America by Dan Abnett will provide some answers?)

Review: Man, can we PLEASE get future books set in this version of Earth-2 now that it's back in continuity? This has honestly been the BEST Earth-2 I've read in a damn long time, and I desperately want more of what we got in this week's Convergence. I already lost hope that the current Earth-2 will ever be salvaged from the train wreck that was Earth-2: World's End, and I similarly lost marginal interest in Earth-2: Society with the recent revelation that the new Helena Wayne will now be characterised as the main villain for that series. In addition to being a complete 360 from even the character we got in the New 52, our new villainous Helena Wayne even has the 'scar face' to complete the cliché 'bad guy' look. I can't make this shit up! 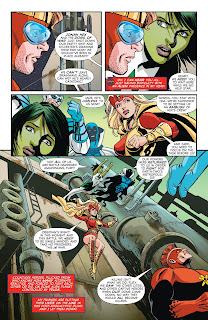 Considering the next round of rubbish we have in store for June, the thing that made this week's Earth-2 Convergence so great a read and a magnificent departure from anything we've gotten in the last three years is that the heroes actually act like heroes, even when they are pitted against each other. Friends are not made to fight each other for 'drama.' None of the heroes threaten to kill their own allies for upsetting them. None of them are angry, brooding arseholes who are driven by rage rather than reason. Despite the premise of Convergence being a battle to the death for survival, the stories never devolve into a series of disaster porn where no one comes out on top and everybody loses. I can't emphasise enough how refreshing this was to see!

Continuing our discussion on Infinity Inc for Convergence, the younger legacy heroes of Earth-2 are put to the test when they find themselves in a battle to the death for survival against Jonah Hex and the Dogs of War. The Infinitors' inexperience with handling 'Crisis' situations is made evident right away by their impulsivity and even their nervousness about the situation. Out of the entire group, only Hippolyta Trevor and Sylvester Pemberton (Fury and Star-Spangled Kid respectively) feel the most confident about winning this battle due to the Amazonian training Lyta received throughout her life, and Sylvester's previous experience fighting alongside the Justice Society. The rest of the team members are nervous about the outcome of this battle, but nonetheless give it their all and do their best to comply with the 'contest's' rules without resorting to bloodshed.

Just like with issue #1, the thing I enjoyed most about the finale is the depth with which writer Jerry Ordway writes each of the characters and how they each react differently to their situation. With characters who have the most experience with 'battle situations' like Lyta and Sylvester, Ordway characterises them as giving it their all, and Lyta in particular is presented as 'fighting to win.' Her strong confidence in her Amazonian upbringing is present in the scenes in which she takes down each of the people she fights and she very much doesn't negotiate. If anyone comes gunning for her, she'll have them down on the ground in a heartbeat, no questions asked. This is one way that she differs from her mother (the Golden Age Wonder Woman) who is the type to reason first, show her lasso second, and show her fists last.

One thing I felt was off about Lyta in this issue, however, is her line about 'taking no prisoners, this is war,' which doesn't strike me as something any daughter of Wonder Woman would say. I can understand Lyta being a more impulsive character and a bit more willing to show her fists than her mum, but she also doesn't strike me as the 'fight to kill' type. While the Amazons are often thought of as warrior women who fight to the death (which is in character for them), one thing that makes the DC Universe version of them standout is that they prioritise wisdom and strategy above all else, especially in battle. They're not killing machines who see an opponent on the horizon and swing their swords to cut some meat. They actually think things through. While Lyta doesn't do much in the way of strategising, she does at least take down her opponents without killing them and gives them a chance to surrender. I will admit I was uncomfortable with her looking like she was about to snap someone's neck, but at least she had the excuse of Telos threatening to destroy her city of Metropolis if they broke the rules in any way. Under different circumstances, I'd say that's out of character for her.

Two other characters I really enjoyed the characterisations of were the twins Jade and Obsidian who are the youngest (they're teenagers) of their group, and some of the least experienced heroes in the team. Jade in particular is the most nervous of the two, and is easily paralysed and subdued before her brother steps in to save her. She is presented as scared and even desiring for her father, Alan Scott, to protect her. This is not unrealistic for a teenage girl who is very new to the superhero game and doesn't really know what to do in a situation that explicitly calls for 'kill or be killed.' I also don't think it's unrealistic for Todd to violently threaten anyone who harms or threatens his sister, or for him to impulsively say that he'll hurt them really badly if they do. Again, he's a teenage boy, and given his background being raised by an abusive adoptive father, he wants to hold on to the only family he has left. 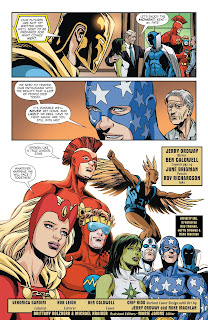 The other characters like Nuklon, Silver Scarab, and Brainwave Jr do their best in a bad situation, though Brainwave ultimately ends the entire battle by invading the brains of their opponents. Sylvester was incapacitated earlier in his attempt to reason with Jonah Hex and the Dogs of War, so he didn't really get much to do until the very end when he resumed his leadership hat.

This is undoubtedly a very satisfactory ending for this story, but rest assure I don't want it to end! I'd like to see future stories with this newer Justice Society and I'd love to see how these new team members get along with Huntress and Power Girl who are slightly older (they're almost 30 within this timeframe) and have been Justice Society members for nearly a decade. While they have worked alongside Huntress and Power Girl when the team first formed and the idea of these younger heroes working alongside Huntress in particular was briefly explored in the JSA Annual #1, I'd still like to see where this idea develops. Since pretty much all of the older Justice Society members retired by this story's finale, this gives Huntress and Power Girl seniority in the team along with Sylvester and Dick Grayson who are now the older members of the team.

The last thing I enjoyed with this issue is the pencilwork by June Brigman who's style is more similar to Ordway's, which brought home a more familiar feel to the characters. Like Ordway, she too has a more realistic art style and is a bit more detailed in her line work than Ben Caldwell from the last issue. Like Ordway, she also successfully captures the distinct personalities of the characters when she draws them fighting, and I was especially fond of the way she drew Lyta Trevor in her scenes. Her Lyta is presented like the mighty Amazonian she sees herself as, and undoubtedly, my favourite panels with her are the one where tells her teammates they're setting up an ambush for the Dogs of War (panel 03 of page 01), and the last panel of the last page where she looks on feeling honoured that she was finally granted membership into the Justice Society. I do wish Wonder Woman was present in this scene to see her daughter succeed her seat!

All in all, this was and fantastic read, I demand that everyone buy Infinity Inc this week! Don't disappoint me this month like last month!