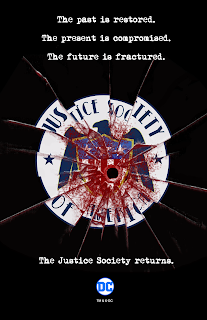 JUSTICE SOCIETY OF AMERICA #1
Written by TOM KING
Art by TOM DERENICK
Cover by LEE WEEKS
The actions of Dr. Manhattan caused the Justice Society of America to disappear from the DC Universe. After becoming inspired by Superman, Dr. Manhattan restored the DC timeline and the Justice Society returned. But are things truly back to normal? As the Justice Society seek to understand their place on this new world, they encounter a new threat in the form of an old friend: Helena Wayne! Now the daughter of our world's Batman and Catwoman, the Huntress travels back in time from a grim future that was set in motion by the sudden reappearance of the Justice Society! Her mission? Save her future by removing the anomaly that destroyed it! Don't miss this explosive extra-sized first issue by DC superstars Tom King and Tom Derenick!
ON SALE 07.29.20
$4.99 US | 48 PAGES | FC | DC

Today, DC released an early solicitation and two teaser posters for the new Justice Society of America ongoing out this summer, and the first order of business is time travel shenanigans? Sounds like my favourite kind of JSA story, except...

Instead of the Justice Society's usual time-travelling villain—Per Degaton—about to wreck things up, it now looks like that role will be fulfilled by Helena Wayne, and not just any version of her, either. It now looks like there will be a Prime Earth version of the character making her debut as the Huntress, but with a very different mission statement: hunt down the Justice Society of America and ghost them from history again. At least, the solicitation and posters make it look that way. (Crossbow Killer alert?) 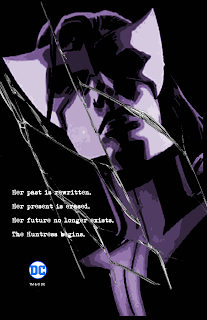 Either way, it looks like the new JSA ongoing will be following up on the theme of DC being a metaverse from Doomsday Clock where changes to the main DC timeline results in the creation of a new Earth. If we recall from Doomsday Clock #10, this was certainly the case where Superman did originally appear in Metropolis in 1938 with the Justice Society of America wanting to invite him to the team in 1940. Then something changed in the DC timeline that resulted in the JSA forgetting his existence and Superman later reappeared in the 1950s, presumably starting the Earth-1 timeline.

The JSA was no longer acknowledged as still existing on this Earth, but they later re-emerged on the parallel world known as Earth-2, complete with the original Superman who appeared in 1938. Then Crisis on Infinite Earths happened and collapsed the multiverse into a single Earth, seemingly forever. The multiverse, of course, later came back, though not quite the same as before. Its lifeline was now linked to that of the post-Crisis Earth, which was subsequently changed the moment this world's history was changed by Barry Allen.

The events of Flashpoint resulted in the creation of the New 52 Earth (along with a new multiverse), which resulted in more changes such as the erasure of Wally West, the Justice Society of America, and a couple of others who later resurfaced with new histories. Wally West then found a way back into the main DC timeline resulting in the Rebirth timeline, but still no Justice Society and Legion of Superheroes until Doomsday Clock reinstated them, presumably creating the new Earth-5G.

So now that we're on the Earth-5G timeline, more changes are happening such as Wonder Woman becoming the first DC superhero instead of Superman, and a new Helena Wayne Huntress from the future who is now a native of the main DC Earth, possibly with a brand new history and a new personality. Only now her future is being jeopardised (impacted?) with the reinstatement of the Justice Society somehow, causing her to travel to the past in order to fix her own timeline. There's even a very obvious reference to Helena Wayne's erasure in Crisis on Infinite Earths tossed into the teaser for good measure, possibly DC's way of 're-canonising' her history in the new DC timeline.

Sure sounds like the kind of story Tom King would write...right?

You can all yell at me for today's DC scare as this is NOT the Justice Society comic that's coming out of DC this year, and Tom King is most definitely NOT telling this story. Nor is Tom Derenick drawing it, nor is Lee Weeks doing the covers. All solicited creators are entirely innocent of my April Fools prank today. Please DON'T contact them with any questions. Also, those teaser posters were made by yours truly. :) 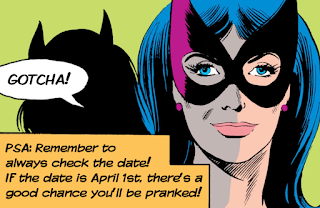