The Best of the Huntress: All-Star Comics #72 Review 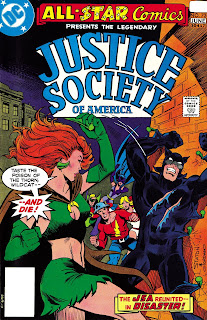 Summary: The Huntress has formally joined the Justice Society of America after successfully helping Wildcat and the Star-Spangled Kid put a stop to the Strike Force in Gotham. Now an official member of the legendary team, The Huntress embarks on her first official mission with the JSA in Keystone City where the Thorn has killed a police officer: Jack Reilly.

Before the Thorn can claim her next victim—Judge Anders—the JSA make it to the courthouse in an attempt to keep him safe from the determined villain. They are unsuccessful in their rescue attempt, but end up with an additional casualty: Wildcat, one of their own team members. The JSA rush their teammate to the hospital, but doctors are unable to properly intervene without an antidote to the poison Wildcat has in his system, and even less so with a prior brain injury he sustained from a previous fight.

The JSA act quickly to find the Thorn for a sample of her poison for the antidote, while the Huntress is sent to Gotham to retrieve the Icicle's ray gun in order to help reverse Wildcat's brain injury. Unbeknownst to the entire group, Rose Canton (the Thorn's other identity) was in their midst as a hospital nurse. Now aware of the JSA's plan, Rose recruits some help of her own: The Sportsmaster to take care of the JSA, and his very own wife: the older, more villainous Huntress to dispatch of the younger, more heroic Huntress! 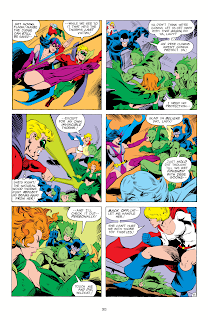 Review: It is St. Patrick's Day today, which means it's been a little over four months since I last did a 'Best of the Huntress' review. Part of that was owed to me figuring out what I haven't covered yet (since I didn't initially review these older stories in order), and the fact that I've been completely swamped with work. Between my day job (which had us all working on a major project), podcasting, and working on my History of the Huntress page for this website (I recently finished the pre-Crisis era, currently available on my Patreon), I didn't get around to covering this story until now.

With All-Star Comics #72, there are really three main points to cover with regards to Helena Wayne's character development: first, the fact that she officially joined the Justice Society and how the rest of the team reacted to her recruitment. Second, how she works alongside her new teammates, and, three, how she feels valued within the team. The added bonus is that she got to fight the more villainous Paula Brooks Huntress, who—incidentally—is an enemy of Wildcat.

One of the things that stands out right away about Helena Wayne's first official case as a Justice Society member is that there was no debate amongst the older team members about her level of experience or her competence as a heroine during a major crisis. Like Power Girl before her, she was readily accepted, possibly on the merit of being the daughter of Batman alone. This is interesting when you consider that just two stories ago, there was a major fallout between Bruce Wayne and the Justice Society while the former was being manipulated by the Psycho-Pirate.

While Bruce's actions could be easily dismissed as being 'out of his control', the Psycho-Pirate's 'superpower' is still his ability to manipulate a person's darker emotions, which he wouldn't be able to control if those emotions weren't already present in his victim in the first place. So despite the fact Bruce considered the Justice Society his friends and allies, there was a part of him that disliked them as well, possibly due to the fact that they operated in his city, with their new headquarters even stationed there. Given the Justice Society's very recent problematic history with Helena's father, one would think the team would be a little more hesitant to accept her as a new recruit. 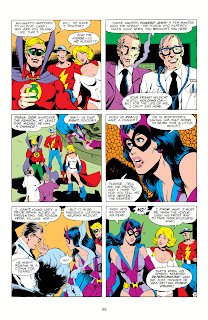 The one moment in this story where Helena does show vulnerability is in the hospital scene where she breaks down crying, feeling like a 'magnet for disaster.' I have to admit, I found this character beat rather unusual as Helena Wayne doesn't strike me as the kind of character who would blame herself for the misfortune that befalls the people around her. Though Helena is still by this point grieving the loss of her mother and how that loss is affecting her father, the incident with the Thorn poisoning Wildcat happened under completely different circumstances.

Whereas Helena's mother was blackmailed into committing one final heist as Catwoman the night that she died, in the case of the Justice Society, they actively pursue villains to stop them from causing harm. As such, each of the Justice Society heroes know what they are getting into when they choose to fight dangerous villains like the Thorn. Injuries and deaths are bound to happen on the job because that's the nature of what they do. The Justice Society heroes know the kinds of risks they're taking to keep everyone else safe from the destructive behaviour of their enemies. 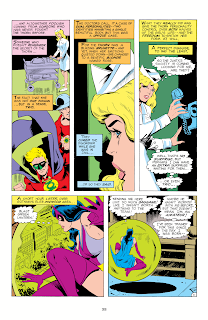 While it's perfectly normal for Helena to grieve the potential loss of a teammate, I really don't think she would blame herself for the misfortunes that befall the costumed people in her life. That just seems odd to me when you consider that her mission statement as a heroine is very much the same as her Justice Society teammates and knows all the risks involved in the lifestyle she chose.

The final major point to bring up about this story is how Helena feels valued within the team, which seems to show the generational gaps between the older Justice Society heroes and the younger heroes like herself and Power Girl. Specifically, we see that Helena feels that she has earned her rightful place within the Justice Society and deserves a higher level of respect from her teammates. When the Green Lantern decides to send her back to Gotham in order to retrieve the Icicle's ray gun, she interprets this gesture poorly.

Whereas Alan Scott was probably only thinking quickly given the dire nature of their situation, Helena instead interpreted the gesture as being treated as the 'new kid on the block' who hasn't quite earned the respect of the street gang yet.

Of course, the more exciting thing that does happen the moment Helena Wayne arrives in Gotham is encounter the Paula Brooks Huntress, who definitely wants to do something about the young lassie whom she feels 'stole her name.' But that's the story for All-Star Comics #73!