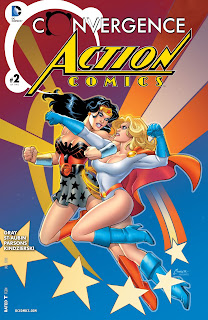 Summary: After Telos announces his death match, Kara gets back into her Power Girl clothes and shares a brief intimate moment with her boyfriend, Andrew Vinson. Andrew is not comfortable with her going to this battle alone, but she is confident she and the rest of the Earth-2 heroes will pull through and win. She reassures him that she and Kal-L have faced far worse crises than the one they're in now. She kisses Andrew goodbye and flies off to fight the champion she's been pitted against.

On her way to the next city, Kara thinks about her year in captivity and how much she dislikes that she's being forced to fight to the death for her right to exist. Not only does it go against everything she believes in, but she doesn't feel it's right for anyone to do something of this magnitude to a whole multiverse of people. She is subsequently attacked by the Earth-30 Wonder Woman who is flying an invisible jet engineered by her world's Lex Luthor. Kara is unable to see the jet itself, but is able to track it using the plane's heat trail. She grabs hold of one of the jet's wings and throws it down to a street in Earth-30 Moscow that's being marched on by USSR soldiers.

The USSR Soldiers do not recognise the jet that's headed their way and fire missiles at it. The Earth-30 Wonder Woman exits the plane and on her way down, she is tackled by the Earth-2 Power Girl. On impact, Power Girl recognises her foe as Wonder Woman (who is her ally on Earth-2), but before she has time to react, she is subsequently kicked by Wonder Woman. The two women then take the fight within the city of Moscow.

In Lex Luthor's lab in Moscow, Stalin breaks in through the other side, prompting Luthor to unveil his robot army to him and rendering him powerless. He later reveals his plan to destroy the other city they're up against in order to save himself and Lois, and ultimately the people of Moscow as well. For once, Stalin is in agreement with Luthor about the solution to their dilemma, but Earth-30 Lois objects to killing the other city. 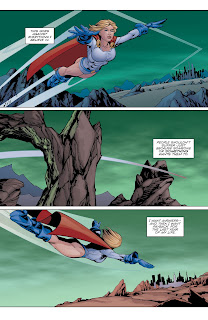 Shortly after the fight between Power Girl and the Earth-30 Wonder Woman, a loud quake is heard and felt across the entire planet. Luthor takes this as his cue to attack the Earth-2 Metropolis, but Earth-30 Lois objects saying that she'd rather die than be held responsible for whatever happens to the people in the other city. At this point, the Earth-2 Supers and Earth-30 Wonder Woman barge in and order Lex to get away from the controls. He sends his robots to attack the heroes, but they're no match of their strength as they easily break them apart. Stalin immediately orders for Luthor's execution, but the Earth-30 Wonder Woman doesn't oblige stating that he's no longer in charge of the situation. The heroes then decide to form an alliance and take the fight over to whoever or whatever is making them fight to the death for survival.

Earth-2 Superman and Power Girl return to their city of Metropolis where they are greeted by their loved ones. The Supers share an intimate moment with their romantic partners and reassure them that they will defeat whatever is out there causing this convergence and come back to them alive. With that, both Power Girl and Superman depart for the main battle in Convergence #8.

Fortunately for Power Girl, writer Justin Gray understands the point of her existence and demonstrates his love for the character through the care and respect with which he develops her short narrative for Convergence. In just two issues, I got an Earth-2 Power Girl who actually reads like the character she's supposed to read as, and feels recognisable as the character Gerry Conway, Rick Estrada, and Wally Wood created back in 1976. Staying true to her character, Kara is depicted as being in a romantic relationship with a man, Andrew Vinson, but at no point in the story is her character reduced for the relationship to work. At no point is her power taken away from her to progress Andrew's story or shift the narrative to him. She is the hero of her own story, and when she is shown kissing Andrew just before going to battle, she is doing so as a person getting ready to leave for war and not as the spouse being left behind while their partner goes to war. This is a development that is rarely given to women in narratives, but is nearly a default in male narratives.

One thing Gray does really well with his characterisations of both Kara and Andrew is demonstrate how different these two people are from one another while at the same time showing their mutual respect for each other. Andrew being used to living in a patriarchy feels like he should be the one protecting his girlfriend, not the other way around, even though he admits this sounds silly. Kara on the other hand is always ready to fight whenever there is a crisis, and she's always confident that she and the Earth-2 heroes will always win given their track record. She doesn't conform to gender roles, and more often than not, it is often Andrew who assumes the 'feminine roles' in the relationship, and Kara the 'masculine.' In a modern DC Universe that's been rife with gendered stereotypes and lazy storytelling in the last four years, it was in fact refreshing to see both stereotypes challenged. It was especially great to see a relationship where the man is less powerful than the woman presented maturely in that the man doesn't feel his masculinity threatened, at least not by much. I also like the fact that Gray doesn't present the man as weak for taking on the traditional female gender roles in the relationship, and is still treated as an equal partner to Kara. 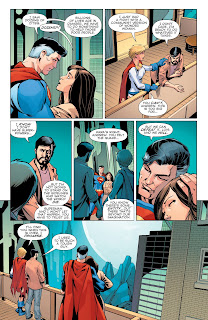 When Kara goes out to fight the Earth-30 Wonder Woman, we see more of the Classic Power Girl's personality shine through, specifically her passion, impulsivity, and strong confidence in her ability to succeed. She also puts up her tough exterior and fights with the intention of winning. In contrast with her best friend, Helena Wayne, who (when written in character) is more composed in battle situations and prefers to strategise before putting forth an attack, Kara is very much the 'punch first, ask questions later' type of fighter.

Part of that is a bit of a guilty pleasure in that she does enjoy being able to punch and break things, and a larger part of that has to do with the fact that she feels very strongly about the people of her new planet--and especially the people in her life--that she is driven by a desire to protect them. As such, she'll always give it her all in a fight and she won't hold back for anything. If someone attacks first, she'll let them have it, which is exactly what I expect to see each time Power Girl enters the scene. These are not the actions of a 'violent mad woman' as one writer once put it, but the actions of a woman who values what she has and will do what she has to do to protect it. Considering she already lost one planet (in this case Krypton), she very much doesn't want to lose her current home, and that is a huge motivating factor for Power Girl here, aside from the fact that she doesn't like being trapped.

On the front of the story itself, since it is largely centred on the battle between Earth-2 and Earth-30, there really isn't a whole lot to say on this front, and I don't know enough about the Red Son characters to comment on whether or not their story bits made sense. I didn't really care for these characters to be honest since I got this solely for the Earth-2 Super family, but I will say that the overall story did end the way every Superman family-centric story should: by showing compassion for others, and with the heroes inspiring their foes to change their ways rather than continue on their more familiar path to villainy. At least, this worked on the Earth-30 Wonder Woman and Lois Lane who despite living very different circumstances still has some things in common with her other incarnations like compassion. Considering how very rare this has become in the modern DC Universe, this development was lovely to see and it left a smile on my face. I do wish we could have more Superman family narratives of this calibre and hopefully we do in the future.

On the whole, this is a great issue to pick up if you're a fan of the more Classic Earth-2 Superman family and would like to see Power Girl written like the original character she was conceived as, and not as the shallow representation of the character we got in the New 52. For me anyway, it was far more enjoyable to be able to spend time with these classic versions of the characters since we won't be seeing them again any time soon, and Gray certainly did not disappoint. This was undoubtedly my Power Girl in action, and I am going to miss her post-Convergence.