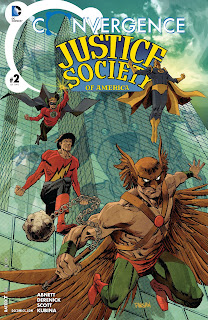 Summary: With the arrival of Qward's war machine that they appropriately call 'the weapon,' the four present heroes of the Justice Society accept the challenge and go off to fight it.

In the middle of Metropolis, the weapon is tearing the city asunder, and the citizens of Metropolis are seen fleeing for their lives. Charging ahead is the mighty Justice Society who work together to both protect the fleeing masses, and figure out a way to keep the weapon from doing more damage. Alan Scott shields the people of Metropolis from debris with his power ring, Carter Hall slams some cars out of the way, Jay Garrick grabs any people he can and gets them away from the danger, and Kent Nelson uses his magic to put out the conflagration the weapon started.

Once the Metropolis citizens are out of danger, the Justice Society heroes focus their attention on the weapon. Alan tries to contain it by building a green-lit box around it, and Kent assaults it with his magic beams. The heroes quickly learn that the weapon cannot be easily contained and that it is sentient, therefore capable of learning its opponents' attacks. The Justice Society heroes then work to revise their strategy for taking it down.

Carter slams into the weapon with everything he has and admits to Kent that he feels good doing it. He, Alan, and Jay all admit that they are enjoying the action, and that it brings a smile to their face to be themselves again after feeling their age for a whole year under the dome. Kent concurs that the feeling is 'gratifying' given that he was in a coma for that whole year.

The Justice Society heroes continue their assault on the weapon and manage to keep it contained within one location of Metropolis, away from citizens. After a while of pummelling it, the Justice Society heroes find they are able to damage it and find its one weakness: within all that armour and shields is a very vulnerable body that they can exploit. Jay settles for distracting the weapon by running, Alan will block its attacks, Kent will pierce right through the shields and armour, and Carter will finish the job of destroying the vulnerable body and shutting it down. 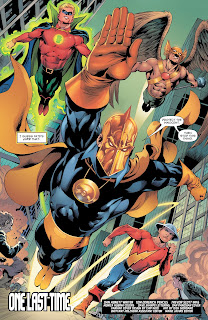 All four Justice Society heroes do their part, starting with Jay running around to distract the weapon. The weapon unleashes a big ball of fire (the same one the Infinitors witnessed earlier from the outside) in an attempt to capture him, but with no success. Alan then blocks the weapon's fire arm and Kent uses his magic beams to penetrate through the weapon, giving Carter a weak spot for him to slam through. Together with all their might, the Justice Society heroes succeed in shutting down the weapon. It is at this moment that Telos announces that the competition is over.

Some time later, the Justice Society heroes are back to being their old selves, including Jay Garrick with his arthritis, bad back, and cane. His fellow teammates meet with him and all four reminisce about their heroic golden age and how it's time to hand the torch over to the Infinitors who are just outside of Metropolis following their battle with the Dogs of War. This time, however, they feel ready to finally do so. Kent, however, departs to let the Infinitors know that the city is alright and escort them back to the city. The other tree JSA-ers decide to go for coffee and shares stories of times long past.

Review: I am going to miss these old guys after this month. In fact, I miss them already. Those four old guys who just worked together as a team to battle a common threat and protect their city? That is MY JUSTICE SOCIETY! Those young, generic angry guys that replaced them in the New 52? They still don't hold any candles to the originals. What more can I say about this beautifully written Justice Society of America finale other than the fact that it was pure ecstasy to read, and it brought a smile to my face? THIS is the Justice Society done right!

I really wish I understood DC's obsession with needing to make everything dark and tragic for the sake of 'edgy,' and the tendency to reboot characters into completely unlikeable versions of their real selves in favour of that laughable fallacy they call 'realistic storytelling.' But everything about this issue was so perfect in terms of narrative and character development, I could cry tears of joy. Frankly, I'm feeling like those old JSA-ers were when they were fighting as heroes one last time.

That feeling of joy instead of anger from reading an Earth-2 Justice Society comic? I miss that a lot! That feeling of being able to read about the Justice Society heroes actually being friends to each other instead of enemies and working together as a team? It's beautiful! Grimdark is 'cool' and 'edgy' you say? Fuck that shit, DC. I like my JSA heroic and good to one another. Tragic disaster porn is more thrilling to watch? Get real, DC! No one reads superhero comics to see the same shit happen on the comic book page that we see happen in real life, but exaggerated beyond what's considered 'real' for pure shock value.

All the wonderful feels in the world aside, where do I even begin discussing the glory that is the pre-Crisis Earth-2 JSA? Can we start by discussing how much I love Kent Nelson as Doctor Fate and how writer Dan Abnett has his voice down to a freaken T? One of the things I absolutely adored about the pre-Crisis Nelson is his personality and attitude when it comes to being a superhero. He loves it! He loves the feeling that wearing the Helmet of Fate provides him when he goes out to fight the good fight for his awesome Golden Age world of Earth-2.

Nelson is always confident in himself, in his teammates, and even when the shit hits the fan, he manages to stay pretty composed. He's a Justice Society member first and foremost and his loyalty is both to his team, his friends, his family, and the citizens he protects. If trouble comes a-roaring, he will be there to take care of it. He will communicate with his teammates, strategise together, and develop the best possible solution for any given threat that will both stop the calamity and keep citizens safe. All of those qualities are present in this issue and Abnett really floors it in his characterisation. Now this is a Doctor Fate that feels recognisable as the character I know and love! 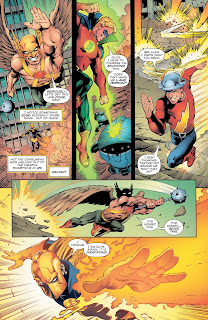 Other shining gems throughout this issue are the remaining Justice Society members themselves. Like Nelson, the other three members present also love being superheroes. When they're all fighting the weapon together, Carter, Alan, and Jay all comment on how good it feels for them to do the thing they do best, which is protect their world from threats. They miss that feeling of being important and actually existing as icons of hope to the people of their world. Part of them feels bad that they actually like having dangerous foes to fight, but they also enjoy the thrill of being able to overcome any and every dangerous threat and always coming out triumphant.

Abnett does an excellent job at capturing the full scope of the character's emotions, especially since they are all met with the reality that they are now too old to be doing this, and that eventually they're going to have to hand the Justice Society torch over to their younger successors, Infinity Inc. They rationalise that if this is the last time they're going to be fighting as The Flash, Green Lantern, Doctor Fate, and Hawkman, they're going to enjoy every second of it and make it worthwhile. In being able to utilise their special powers one last time, the older Justice Society heroes are able to give themselves closure and better accept their new status as ageing heroes.

Abnett handles each individual character with care and respect that the end product presents itself with a uniquely human quality that is absent from many DC books of today, especially Earth-2. It is ultimately a story about coming to terms with ageing and having the last hurrah before making retirement official. While they don't promise they'll stay down forever should another threat arise, they are however, more than ever, willing to accept that the Justice Society now belongs to their younger successors and will be happy to serve as mentors for them.

I know I've said this already, but I really want more stories of this calibre. In contrast with what DC these days thinks is 'mature storytelling,' stories like this week's Justice Society of America is the real deal on that front. The craft is smart, the creative decisions are carefully thought out, and the character development actually feels organic. No one is written out of character as a way of forcing drama, nothing feels out of place, and nothing is being done for pure shock value. Like everyone else who wrote a Convergence title this week, nothing here is written for sensationalism, Abnett is actually telling a story. Tortures, decapitations, dismemberments, body horror, and rapes are not present here to emphasise the gravity of the situation, Abnett does fine with just a sentient war machine tearing a city apart, and four human men with extraordinary powers working together to stop it from doing further harm.

If we get more books set within this version of Earth-2 in the following months, that'll be enough to get me to buy a DC comic again after this month. If these characters are attached to better editors and given great creative teams who love the history of Earth-2 and the legacy of the Justice Society, I'll be sold on putting DC books on my pull list again. The fact that Detective Comics, Action Comics, and the Justice Society of America were top sellers for Week 04 gives me hope. It tells me there is still interest in these characters after the firestorms that were Daniel Wilson and his editor, Mike Cotton, killed a lot of people's interest in Earth-2 with the garbage that was World's End and now Earth-2: Society. Now if more people buy Infinity Inc this month, my faith in DC fandom will be fully restored!