The Best of Huntress and Power Girl: Adventure Comics #465 Review 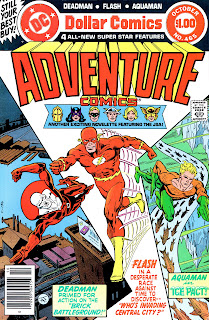 Summary: In Gotham City, a dangerous pill capsule capable of killing the entire city has been stolen, and the Justice Society have only five hours to find the missing capsule before it releases its deadly gas into the atmosphere. The heroes of the Justice Society frantically search the city for the capsule to no avail, until a radio broadcast tips the Flash on potential suspects.

The Flash shares this information with fellow Justice Society comrades Green Lantern and Hawkman who then follow him to the location of the blackmailers looking to use the capsule for ransom. When the three heroes arrive at the blackmailers' hideout, they soon learn they don't actually have the capsule, but merely took advantage of the theft to get ransom money. The three heroes then find themselves back at Square 01.

In Gotham Hospital, Huntress and Power Girl are dusting for fingerprints inside the office where the poison capsule was kept. Huntress finds a set of fingerprints outside the cabinet and asks Power Girl to compare the prints from the outside with the ones inside the cabinet to see if they match. Power Girl confirms that they do and fails to see the significance of this finding since the police had already confirmed earlier that the only prints on the cabinet are from the employee file. Huntress agrees, but then asks why prints from a woman hired to clean the outside of the cabinet are found on the inside?

Huntress and Power Girl take off to see the woman suspected of taking the poison capsule and find themselves meeting with an old woman. She confesses that she did take the capsule, but not for her own use. It turns out her son is a drug addict and needed his fix to keep from getting sick from withdrawal symptoms. To save him, she had to provide him with something of equal value for his fix, which led to her stealing the capsule. Huntress and Power Girl then continue their search for the drug dealer her son may have sold the poison to, and Huntress narrows down her list of suspects to one potential buyer: a drug dealer by the name of 'Trader Tom.' 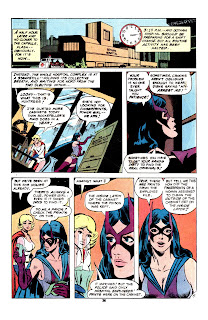 Huntress (with Power Girl present) interrogates Trader Tom on the whereabouts of the poison capsule with her crossbow pointed at him. Trader Tom doesn't know what she is talking about until she describes the capsule that came into his possession earlier that morning. He says that he took it down the pipeline as he normally does and doesn't know where it's gone since then. Seeing as he is of no further use to her, Huntress shoots a tranquilliser dart at Trader Tom to knock him unconscious and to prevent him from alerting his contacts.

Above the skies of Gotham is Hawkman growing impatient with his search for the poison capsule. Doubting he'll find the capsule in time, he decides to recruit the help of Doctor Fate who is locked away in his Tower in Salem. When he arrives there, however, he soon finds that his old comrade is preoccupied with a different matter. Fate's wife, Inza Nelson, does not appear to be concerned about her husband's erratic behaviour and discourages Hawkman from interrupting him. Hawkman feels that his emergency is far more important than whatever Fate is working on, and will deal with the consequences of his interrupting him later. He manages to disrupt Fate, but the reader is left wondering about the outcome of the disruption.

Back in Gotham, the 4:00 news reveals that the city is in danger of becoming exposed to a deadly poison and that there isn't any time to evacuate. The news anchor also reveals that the mayor of the city delayed announcing the threat to avoid mass panic, but places faith in the Justice Society to resolve the issue before the real danger hits. Power Girl is displeased to hear this since they only have an hour left to find the capsule, and starts to lose confidence that they'll be able to stop this one on time. The remaining heroes--Huntress, Green Lantern, and the Flash--decide to go full force in tracking down the drug dealer in possession of the capsule now that they have a lead thanks to the Huntress.

The four heroes narrow down their search to a local crime boss and interrogate him for the whereabouts of the poison capsule. At first, he denies that he buys from a guy named Trader Tom until the Huntress forces the truth out of him. He then confirms that Trader Tom is one of his regular sellers, but still doesn't know what the Justice Society heroes are talking about since he disposes of a lot of the rubbish that gets sold to him by Tom. The Justice Society heroes are then forced to quickly search through the nearby rubbish bins in hopes of finding the damn capsule before it unleashes its deadly poison. They once again reach another dead end when they are unable to locate the capsule and the molecular traces from the capsule don't lead anywhere. That is until the Huntress finds a tuft of fur from a live animal amongst the rubbish that could potentially lead them to the capsule.

Deciding they don't have time to debate the Huntress' findings, the Justice Society heroes decide to take a leap of faith and follow-up on the Huntress' lead. Green Lantern's power ring leads them to a dog near a Gotham beach, which does in fact lead them to the capsule. Green Lantern encases the capsule within a green light bubble from his power ring to contain the deadly poison. The timely arrival of Doctor Fate and Hawkman allows them to remove the capsule from the Earth so that it can explode somewhere outside the reach of any life form. 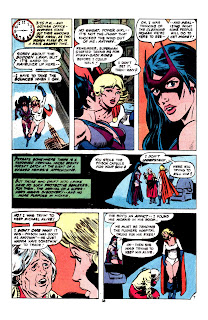 Review: I'll be the first to admit the story revolving around a tiny pill capsule that can kill an entire city upon going 'pop' isn't terribly remarkable. To begin with, what respectable institution such as a hospital would develop a poison capsule capable of destroying whole cities, and actually have it go off at a scheduled time? Had the capsule been developed by the Injustice Society, for example, there'd be no issue with this idea since something like this would be par for the course. But a hospital developing this weapon and keeping it inside the same building where they treat sick people? As a reader, I find myself asking 'who would actually do that?'

Additional problems with this setup include the idea of a mayor not evacuating a city upon finding out that there is a high danger for mass poisoning. More than a mayor would be concerned about mass panic in this scenario, he or she would be more concerned about being held accountable for thousands of deaths, resulting in both his/her termination of office, followed by criminal conviction. More than anything, a mayor would most definitely issue an evacuation upon learning of a potentially hazardous situation. They're not the type to take risks with human lives, even if there is a superhero team available to handle the problem!

Other problems with the story development was establishing that a drug dealer actually pays money for rubbish he'll later throw away, which makes you wonder why he paid for it in the first place. There's also the issue about the writer writing himself into a corner that it took a deus ex machina in the form of the Huntress finding a tuft of fur from a live animal that conveniently led the Justice Society heroes to the capsule. Then there was Paul Levitz establishing that Doctor Fate was working on a case of his own and not clarifying why he was working on it. He also didn't really follow up on it, which makes you wonder if it served any real purpose in the story other than create unnecessary conflict with Hawkman.

Still, despite those really bizarre story developments, it's actually seeing the Justice Society characters in action that makes this story worthwhile. I especially love how the heroes split themselves up into teams of two, and how they work together to solve a problem within a short time frame. This issue had two classic partnerships fronting this story, in this case the Golden Age Green Lantern and Flash, as well as the younger Huntress and Power Girl.

It's always fun to see Jay and Alan working together because of the way they play off of each other, much in the same way that Kara and Helena do. Like Kara and Helena, Jay and Alan often combine their skills to resolve a problem faster and it always works to great effect. The characters, however, that really drive the story are Huntress and Power Girl who actually find all the clues that allow the Justice Society heroes to avert their newest crisis. It is in this story that we see more of Helena Wayne's detective skills in action and what she contributes to the team. 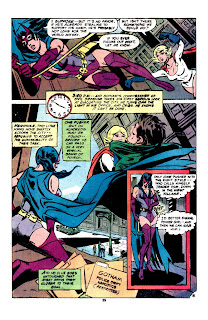 Whereas the Justice Society heroes are mostly super-powered entities who thrive on stopping more supernatural threats, the Huntress is more of a street-level fighter, and searching for clues is more up her speed. Since the threat in this story isn't a supernatural one like the Wizard unleashing a stampede on Gotham City, or Brainwave creating a death ray, or Circe turning every man in the country into pigs, the Justice Society heroes don't really have much use for their powers here, and very much rely on the Huntress' detective skills to resolve the crisis with the poison capsule. It's very much a story that centres on the Justice Society heroes dealing a threat that requires Helena's unique set of skills within a short timeframe, and emphasises her importance to the team.

With Bruce Wayne no longer living by the time this story takes place and Dick Grayson working abroad, that leaves Helena as the only hero available in Gotham to function as the Justice Society's resident detective. This story very much emphasises that if not for Helena's availability, Gotham City would've quickly turned into a ghost town.