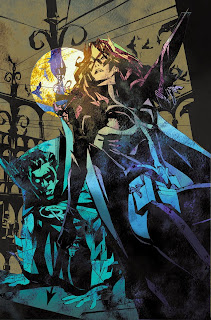 One thing I enjoyed this year was Convergence. Despite not performing as well as DC wanted, I still appreciated the fact that--for two very brief months--we did get the more recognisable Earth-2 characters back. Those two months were the months I bought the most DC comics in a long time, and they were also the happiest I've been in a long while.

We also finally got the trade for America vs the Justice Society this year, which is one of my favourite stories of all time from the pre-Crisis era. Not only did I buy that book in both print and digital form, and had a great time reviewing it, but I also got my curious friends to buy it. I consider that my major accomplishment for the year! Hopefully we get the more recognisable Earth-2 characters back in some form. (Sooner rather than later as I am not optimistic about the future of Earth-2: Society right now with sales as they are).

Other positives? Well...that was very much it. These past four years have been very frustrating for me, not just as an Earth-2 fan, but especially as a Huntress and Power Girl fan. My blog entries throughout these past four years have made that clear. The ironic thing is when I originally created this blog four years ago, I did not anticipate how haphazardly this new DC Universe was going to be conceived, nor did I expect Earth-2 to be developed as this shitty Elseworlds universe right up there with Red Sun: Superman or Injustice: Gods Among Us--two narratives that offer radical but ultimately inauthentic reinterpretations of classic DC characters.

When I originally created this blog, I was expecting a more modernised reboot of Earth-2 while preserving the original ideas and concepts that made this world fun to read about the first time. I loved the fact that Earth-2 was this world where heroes appeared decades before the Earth-1 Justice League, effectively establishing a sense of history and legacy. I loved that there were different generations of heroes that were members of the Justice Society, and I loved that there were other superhero teams like the All-Star Squadron, the Seven Soldiers of Victory, and Infinity Inc--the latter of which was the legacy of the Justice Society.

I also loved that heroes aged and married in this universe, and that their children grew to adulthood to succeed them as Earth-2's modern heroes. That was part of the appeal of Huntress, Power Girl, Fury, and all of the Infinitors. They were the legacies of their parents, but they also did their own thing and established their own identities, which was really cool. I do genuinely think that a lot more could've been done with that original concept, it saddened me that the modern Earth-2 became this generic Batman-Superman-centric alternate universe, complete with an alternate Justice League full of young people and lacking in age diversity. So much of what made Earth-2 genuinely unique and interesting got scrapped in favour of a violent, generic Elseworlds narrative that culminated with the abysmal Earth-2: World's End event. That makes me sad. But I'm even more sad that this blog didn't turn out to be the space I wanted to be. 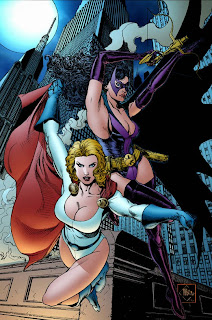 When I created this blog back in 2011, I was expecting to talk about how cool Earth-2 is as a concept, what I enjoy about the current comics as well as the old comics, compare and contrast the past with present, fun stuff like. Instead, I found myself feeling repeatedly offended by the overall direction of Earth-2 in the current continuity, which wasn't inviting to me as a female reader at all. It still isn't. I'm very put off by the constant war narrative, and I am especially offended by the constant use of violence against women as tools for male character development--a trope famously known as women in refrigerators.

The latter problem has been especially true of Lois Lane, Selina Kyle, Barbara Gordon, and even Helena Wayne, all of whom had violence committed against them as tools for progressing male story arcs. Lois was killed to progress Superman's story in Earth-2 #1, Selina was killed to give Helena a tragic origin story in World's Finest #0, Barbara Gordon was killed during Earth-2: World's End in order to give Dick Grayson a reason to become Batman, and Helena Wayne was subjected to torture and body horror in that same event in order to give her grandfather 'an important person' to rescue. It was wholly offensive storytelling for a character that exists to be a superhero, not a prop in a man's story. If that wasn't enough, Helena's face was also pointlessly mutilated and scarred in Earth-2: Society for no real reason than the idea sounding good in someone's head, and that is not acceptable.

In an era were comics are trying to be more inclusive of women, it's important that creators, editors, and publishers alike be more thoughtful of women's experiences and not develop narratives that perpetuate things like violent misogyny and sexism as tools for plot and character development. Not only do those types of narratives dehumanise women as a whole group, but they also help perpetuate attitudes and behaviours that harm women in real life as well. Since DC is in the business of making superhero comics and not slasher flicks, they should, perhaps, get reacquainted with the idea of superheroes being inspirational.

Getting back to the main point, believe me when I say I am more than exhausted constantly drawing attention to the issue of misogyny and sexism in the Earth-2 comics because I do not read these books to get offended. I read these comics because I really love the characters and want to see them treated with more respect. Women in refrigerators is not a topic I enjoy talking about and I very much don't want to keep writing about it in 2016 and in the years that follow.

Like Marjorie Liu's famous 'allergic to bad representation' speech at this year's NYCC, I have a strong allergic reaction to this trope. So much that I will tear apart anyone who uses it, and I will not be merciful towards anyone who defends it. It's indefensible. But that's the thing. I found myself doing more 'tearing apart' these past four years and less constructive criticism, which is not how I want to keep doing reviews. 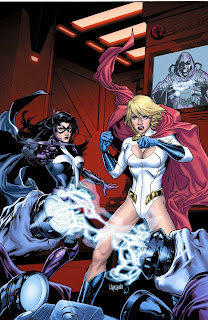 I will admit that in a fandom culture where creators and other industry professionals are repeatedly abused by less thoughtful fans on social media that I definitely could've approached some of these creators about their storytelling issues better than I actually did. I especially think I could've approached Daniel H. Wilson better about the problems with misogyny in his storytelling than my initial 'yelling at him' for perpetuating tired, misogynistic tropes. I don't think that there is any excuse for bad storytelling, but I do think the problems with his writing could've been better addressed.

While I do think anger is a legitimate response to bad representation and I'm not in favour of tone policing, I also think that on social media, it absolutely does matter how we say things to other people, and that we don't get personal in our interactions with them. A lot of times, anger can easily facilitate the latter, which doesn't help things. I also think that we need to grant industry professionals the opportunities to learn from their mistakes and grow as individuals so that they can become better at what they do. But I also think that industry professionals also need to be better listeners as well. This is especially true when it's women, people of colour, and members of other marginalised groups addressing issues with their storytelling, and not the average fanboy losing their shit because Batman is wearing a RoboBunny suit or something.

More often than not, the things that upset us are not petty, stupid things like changing a character's costume, or changing their eye colour, or anything like that. The things that upset us tend to be very personal and tend remind us of the inequalities that exist toward our respective groups. Things like trivialising violence against women, presenting women as sex objects on the cover, using women as tools for male agency, or characterising diverse characters in ways that perpetuate negative stereotypes about the groups they represent--stuff like that is what upsets us.

With so much hurting clearly going on these past four years, what can we do in 2016 to start resolving our differences? We honestly need to help each other out. DC clearly needs money and I need comic books that I can actually enjoy reading and talking about. I don't expect perfect comics, but I do expect comics where the good outweighs the bad. So how can we achieve this?

So there we have it, guys. My reflection of the past year and new years resolution. I suddenly feel better having written all of this!
Posted by Diane Darcy at 11:00