DC's Rebirth Is Leaving Me Weirdly Optimistic--Some Spoilers Ahead 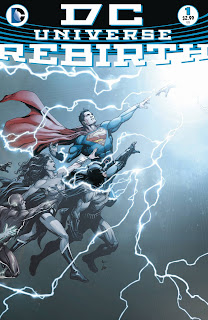 When I first heard of DC's Rebirth initiative earlier this year, I was cautiously optimistic especially with chief creative officer Geoff Johns overseeing the project. When we officially learned the details of the initiative in a live press conference in March, I was quickly bummed out by the lack of Earth-2 and Justice Society news, effectively leaving me with the impression that DC had decided to abandon the concept all together.

Johns had later confirmed that the Justice Society was 'still out there somewhere,' but without any details of the team's status, I couldn't bring myself to feel excited for that rather ambiguous confirmation, especially given DC's history with the Justice Society. Now that some very spoilery details have been leaked, I feel my optimism rising again and hoping for a better future. Since there are two major spoilers mentioned in this post, I highly recommend that you turn away now and come back to this post on Wednesday after you've already read the one-shot.

Yesterday, Newsarama released the official (and spoiler-heavy) preview of Geoff Johns' 80 page one-shot. In just five pages, we learn that its narrator is (SPOILER ALERT!) the pre-Crisis Earth-1 Wally West in his Kid Flash costume. Yes, the original Wally West who was a Teen Titan in the 1980s, seemingly confirming that he's still out there somewhere and may still return.

Obviously, I don't know what to expect from Rebirth at this stage, and while many comics news sites are already spoiling the hell out of Rebirth, I'm still uncertain of the changes we can expect. However, if we're already getting back the original Wally West from the pre-Crisis Earth-1 era, plus it's been confirmed on multiple websites that the original Justice Society is returning to the DC Universe, I have reason to hope that I may still see the pre-Crisis Earth-2 characters yet. At least, from my perspective, it would tremendously compensate for the train wreck that the New 52 Earth-2 became under Eddie Berganza's editorial office, and the Dr. Frankenstein creation that is now passing for Earth-2 in the Earth-2: Society series.

I really want to be optimistic about this. I really, truly do, namely because it'll mean that I'll finally have something positive to say about DC's direction for the first time in five years. As much as I prefer having a multiverse over another Clutter Earth (plus I still feel DC is lacking structural diversity), if Rebirth means scrapping all of the cynicism, the extreme violence, and overly dark tone that have been plaguing DC for the last three decades in order restore light and optimism to DC Comics characters and narratives, I am totally game. Because the one thing that's been missing from DC since the start of the post-Crisis era (aside from fan favourite characters, relationships, and narratives) has been exactly that: optimism and light. Some narratives had it, but there were many more that didn't, which made both the post-Crisis and New 52 continuities largely joyless for me compared to the pre-Crisis comics.

In many ways, the five-page preview for DC Universe: Rebirth alone feels like Johns is apologising to fans for decades of getting so many characters and narratives wrong. He also appears to be tracing the source of the problem (in a meta sort of way) to Alan Moore's graphic novel, Watchmen, which many have held responsible for ruining the foundations of mainstream superhero comics for the last 30 years. That multiple sources have confirmed that (SPOILER ALERT!) Dr. Manhattan was responsible for creating the New 52 Earth and not Pandora as previously established seems to validate that opinion.

I want to believe that Rebirth will lead to a major turnaround for DC Comics both tonally and commercially. I strongly believe all of these characters need to be accessible to everyone from the very young to the very old in order to sustain and especially foster a future audience. As the late Darwyn Cooke once said:


The bravest and smartest thing [Marvel or DC] could do would be to scrap everything they’re doing and bring in creative people who would have the talent and were willing to put in the effort it takes to write an all-ages universe that an adult or a child could enjoy. If either one of these companies were smart enough to do that, I think they could take huge strides for the industry.

He was absolutely right, and for the first time in 30 years, it's starting to look like both Marvel and DC are finally learning from their past mistakes. I wasn't originally going to buy DC Universe: Rebirth after feeling bummed out over the lack of a new Earth-2 Justice Society title, but I will definitely buy it now on Wednesday and report back here. If I find myself pleasantly surprised by what I find in its 80 pages, I'll post a public love letter to Geoff Johns on this blog for restoring light and optimism back to DC. If it turns out to be more of the same, you'll surely know about it because I'll definitely rant about it. However, I strong feeling that won't be the case this time, and I can almost taste that love letter happening from light years away!
Posted by Diane Darcy at 12:17