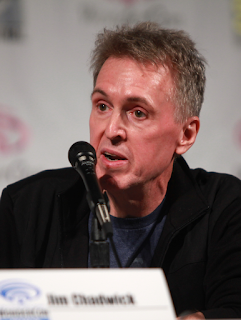 I noticed last month that a new group editor was credited on Earth-2: Society #11, but didn't know at the time if this was a permanent change or if this new editor was only temporarily filling in for editors Eddie Berganza and Michael Cotton. Now that the preview for Earth-2: Society #12 is available, it looks like the new group editor, Jim Chadwick, is here to stay.

I don't know anything about Jim Chadwick as an editor other than the fact that he was mostly active in DC's digital office and was also the group editor of the New 52 Secret Six series by Gail Simone, but I nonetheless welcome the change. Not only do I find this change refreshing and welcoming because of the recent outing of Eddie Berganza as a serial sexual harasser, but also because I found his particular office very hostile towards women in general. This didn't just reflect in some of the male editors and creators this particular office employed that expressed anywhere from ignorant to toxic views of women in interviews, but even the internalised misogyny was prevalent in all of the books that this office touched.

Aside from not employing any women as editors, this particular office's problems with misogyny often surfaced in the form of constant marginalisation and abuse of Lois Lane in the Superman line of books, the complete bastardisation of Wonder Woman and her entire mythology, and even the active removal of Huntress and Power Girl from their own narratives on Earth-2 to make those narratives about men. Even from a narrative standpoint, all three properties were so completely mishandled by Berganza's editorial office that damage control was required for these properties to see any sliver of success for Rebirth. (We're still awaiting details on the Justice Society, however).

There was already a lot to dislike about Eddie Berganza's editorial office before the outing of Berganza himself as a genuinely toxic person around women in real life. So getting the Earth-2 property out that office was one of the best decisions DC has made this year. Frankly, it should've happened sooner, but better late than never I suppose. Unfortunately, I don't think a change in editor is going to fix any of the damage the last editorial office left behind, but it is, at least, a start. What I would like to see happen from this point forward? I still want to see a clean reboot of the Earth-2 property to undo all of the damage Berganza's office made in the last three years. However, if we're getting another Justice Society later this year, hopefully it's the pre-Crisis Earth-2 Justice Society, and hopefully he'll be the editor for that. (One can dream).
Posted by Diane Darcy at 16:21