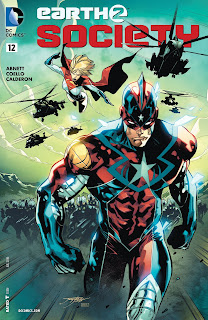 Summary: Ark Home Colony and Erebus City are on the brink of war, and the World Army moves in on both cities prepared to take any measures necessary to keep civilians safe from hostile combatants. Huntress, Power Girl, and the Flash are against killing their own people (including the combatants) which puts them at odds with Captain Steel who is very prepared to kill if necessary. Huntress, Power Girl, and Flash only agree to help out with the war on the condition that they resort to killing only as a last ditch resort.

In Nexus, Alan Scott meets with Val-Zod to seek his advice on how to best prevent an oncoming war. He's conflicted about using his powers to stop the combatants from killing each other as doing so will validate existing resentment the people of Earth-2 already have against the Wonders for the destruction of the original Earth. The last thing he wants is to fuel future conflict. On the other hand, if he doesn't take some sort of action, people will die. Val-Zod agrees that this new world does not need another war after the last one resulted in the loss of life by the trillions. He believes that the key to stopping the war is not to fight the combatants themselves, but to fight the reason the war is happening in the first place. This inspires Alan to redistribute his power as a way of powering up the new Earth, effectively stopping all combatants from picking up their guns. Doing so makes him mortal again, but he is perfectly okay with this as he is now free to live a normal life again.

When the war between the two cities is prevented with Alan Scott giving up his power to provide all of the new Earth's inhabitants with a power source, the mastermind behind the war that almost happened is revealed to be classic Justice Society villain, Ultra-Humanite, who wanted Alan to give up his power so that he could move forward with his own plans. 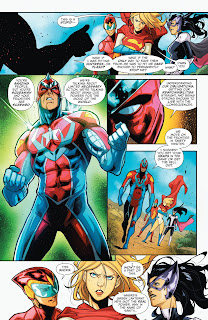 Review: After being disappointed with the last two issues, I was actually pleasantly surprised with this one. I think it helped tremendously that this issue wasn't Usurper Grayson-heavy and there was actual focus on the Justice Society characters with those characters occupying the majority of the page count this time.

One of the major strengths of this issue is that most of the characters were well characterised despite being on the brink of war. Both Huntress and Power Girl were actually given speaking roles this time and weren't just standing around as background decoration like in past issues. I also liked that they were written as sticking to their own morals and refusing to participate in a war if it meant killing the combatants who are also people. That is very much in character for both women, and I also liked that Power Girl was written as not taking any crap from Captain Steel, which feels more like the classic Power Girl I know and love. The Flash was also against killing the combatants and was pretty much the first to defy Steel on that front.

On Captain Steel, I felt he suffered the most on characterisation, especially since he came off as pretty eager to kill combatants and found himself rationalising the need to kill, which felt bizarre. I understand Abnett was trying to present Steel as being in a desperate situation that may require him to take necessary lethal action (war does that), but I also think Steel could've at least acknowledged that he hated being in this position as well. At least in doing so it wouldn't have come off as though he really needed to kill people as the only way to stop the war and not considering any other options.

Another great moment in this issue was the scene between Alan Scott and Val-Zod. Like the rest of the Wonders, Alan doesn't want war to erupt on this new planet having just survived the last global war that destroyed the last one. I think it felt natural for Alan to feel conflicted about using his power on the combatants, especially since it would only fuel already growing resentment the survivors have towards the Wonders for losing the last planet. However, if he doesn't impose some form of authority, the survivors could end up killing each other anyway, and killing is exactly what he wants to prevent. Val's best moment arrived when he said that he was still Alan's friend even if he was no longer interested in resuming his role as a superhero to fight in a war he doesn't believe him. The best advice that he gave was to fight the cause of the war, not the people participating in it. I felt this was very solid characterisation of Val that stays true to the character Tom Taylor created.

The only storyline I'm still conflicted about is Fury's storyline, mainly because I don't like how the character was repurposed in the current continuity. Since I always think of Hippolyta Trevor whenever I think of Fury, it just feels wrong to see her characterised as an anti-hero that could give Talia Al Ghul a run for the title of borderline villain. One thing that I was hoping would get scrapped with Abnett's run was this insulting development of making Steppenwolf her father and characterising her more as a villain's daughter instead of someone who actually resembles Wonder Woman's daughter. I know that Abnett is working with less than desirable circumstances when it comes to the New 52 Earth-2, but I was also hoping for more retconning of bad ideas especially since he's already working towards bringing this narrative to a more recognisable status quo. (Something I highly appreciate). 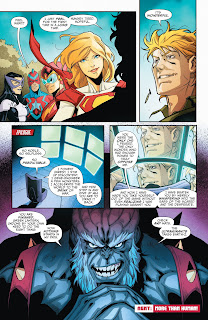 The last thing I enjoyed about this issue was the revelation of the Ultra-Humanite as the mastermind working behind the scenes. Not only is he a classic Justice Society villain, but the way Abnett characterises him in this issue feels very similar to the pre-Crisis Earth-2 Humanite who was also a mastermind who manipulated situations to his favour. The way Abnett used Humanite in this issue actually reminded me of how Roy Thomas used the character in his first story arc of Infinity Inc in the mid 1980s, especially the end reveal. It was so unexpected, it was actually a welcome surprise! The only complaint I have here is that I wish this whole story arc was happening on James Robinson's Earth-2 where Abnett's ideas actually fit, and not Daniel H. Wilson's Earth-2, which was a bloody train wreck prior to this story arc. (Hell, had this been the Justice League, there would've already been a story arc that undid the events of World's End and reinstated the original status quo).

On the whole, I don't have any complaints about this month's issue. The only thing I continue to find bothersome about this series is Usurper Grayson for the same reasons I continue to find him bothersome. Not only did DC go out of their way to erase Dick Grayson's entire history with the Wayne family to make Helena Wayne the only successor of Bruce, but it was also insulting for DC to just shoehorn this otherwise new character into the Batman role without the appropriate history or developments to accompany it. In addition to this being bad storytelling, it was also a development that came at the complete expense of the woman who does have the right developments to take over Bruce's narrative, Helena Wayne, which qualifies as sexism.

While Grayson fortunately took a backseat in this issue in favour of the Justice Society characters, the three pages that he did get still felt bothersome. As an imposter occupying an identity, place, and narrative that rightfully belong to the Huntress, he still felt like an incongruent puzzle piece occupying a space that he doesn't actually fit into. I appreciate that Abnett is trying to make it work, but without Grayson's relationship with Bruce and Helena Wayne intact, his role as Batman feels very out of place. The best thing that can happen moving forward is for this Dick to find his still missing son and move out of the Batman role entirely. Give Helena Wayne back her city, her Wayne tower, and her story, and let this new Grayson take on a different path that actually feels appropriate for this version of the character.

Other nitpicks that I had with this issue was the colouring by David Calderon who got many things wrong from making the Huntress' boots, gloves, and gauntlets white instead of purple, to giving Val-Zod a light complextion, and even whitewashing Queen Marella who is supposed to be dark-skinned as well. He also gave Helena Wayne and Alan Scott a purple-ish eye colour, which also looked bizarre. While I otherwise did enjoy the vibrant colours especially coupled with the gorgeous pencil work of Iban Coello, but I did get distracted by the things the colourist got wrong. Hopefully the colour issues get resolved in the future instalments.

That said, I'm not at a point yet where I love this series or find myself warming up to the new premise, but I am at least enjoying Dan Abnett's writing and am looking forward to what comes next, story-wise. If Abnett stays as the writer when the book gets relaunched in the fall, that'll be enough to keep me buying the comic.