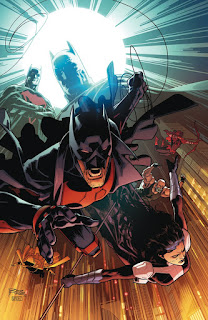 I am seriously getting tired of constantly addressing DC's problems with sexism. We're sixteen years into the 21st century, and we still have to have this conversation. We're especially five years into a relatively new DC continuity, and amidst all of the scandal and controversy surrounding DC's questionable hiring practises (practises where they find reasons to fire women from positions of power while coddling well known sexual harassers with a history), DC continues to demonstrate how little they regard women as both customers and as people.

What is the latest DC fuck-up that has me addressing this problem all over again, for the umpteenth time, on the fifth year that I've been addressing this same problem? Look no further than DC's latest solicitations for August, especially for Earth-2:

EARTH 2: SOCIETY ANNUAL #1
Written by DAN ABNETT
Art and cover by BRUNO REDONDO
Earth-2’s Batman is Dick Grayson. Does he have what it takes to be a true Batman and follow in the legacy of Bruce and Thomas Wayne before him? Or will he only ever be a stand-in? Beyond anything else, he has one overriding goal...to find his missing son. Is that a job for the Batman...or is it something only Dick Grayson can do? The Wayne legacy is at stake. This is an epic turning point in the history of Earth-2’s Batman.
On sale AUGUST 31 • 48 pg, FC, $4.99 US • RATED T

I'm sorry, did I misread this entire solicitation? To start with, the Dick Grayson being solicited on this annual is not the Dick Grayson that was actually mentored by Bruce Wayne as a child and had an existing relationship with Bruce's daughter, Helena, like in the past Earth-2 continuity. The Dick Grayson fronting this annual has never even met Bruce Wayne in the current Earth-2 continuity, which means that neither Batman nor the Wayne family legacy are his for the taking. Second, you mean to tell me that on an Earth where Bruce Wayne had a daughter of his own that he actively raised to succeed him (first as Robin, then later as the Huntress), and she's not the character taking over her own family legacy?

To phrase this another way: the entire Wayne family legacy falls on the shoulders of some male imposter who has zero connections to the Wayne family, and not the woman who actually has 'WAYNE' as her last name? Where on two Earths does that logic even make sense? Such an absurd concept not only violates logical storytelling, but this is DC marketing explicitly acknowledging that they are taking the daughter of Batman out of her own story to make it about a random civilian bloke who has zero training from Bruce himself. This is a Dick Grayson who's entire history with the Wayne family was retconned out of existence by DC in order to make Helena Wayne her father's only Robin and sole successor as the Huntress. (And she's not allowed to be the hero of her own story? Really?)

Without Dick's history with the Wayne family intact in the modern Earth-2 continuity to legitimise his succession to the cowl, DC had to find another way to set him on this path. Somehow, someone at DC thought that the best way to achieve this was to establish him as the bloke who entitled himself to the Batman identity because an alien told him other versions of himself are connected to Batman in other DC continuities. That was literally the explanation that was given in the Convergence miniseries last year in order to justify his new role, however ludicrous that sounds. And of course--as is par for the course for a company that currently thinks so little of women--this Dick Grayson was never even seen seeking Helena Wayne's permission to be a part of her family legacy in the following Earth-2: Society narrative. He just took over her father's identity, her city, and even her own Wayne Tower, and somehow, Helena is characterised as being okay with this. How does DC continue to give lip service about wanting to be more inclusive of women when they keep finding new ways to perpetuate sexism in their own product?

I really want to have faith in Dan Abnett to do right by Helena, and not further erase her from her own story to make it about some imposter DC decided to slap the name 'Dick Grayson' to in a short-sighted marketing attempt to artificially inflate Earth-2's sales. I know Abnett is not responsible for how his own work gets solicited, and he is a genuinely good man stuck with a very problematic book that failed diverse representation on too many fronts that count. I know that he is especially not ignorant on issues regarding female representation in media because his own wife (the equally wonderful Nicola Vincent-Abnett) also writes about these issues on her blog. But my patience with this comic (and frankly DC as a whole company) is hanging by a very thin thread. Not only is it poor marketing on DC's part to outright ignore Batman's daughter to solicit a male imposter who has no rights to her family legacy, but the institutional sexism that inspired this recent shit show doesn't get more transparent than this. It reflects very poorly on a company that already struggles to maintain a respectable image in the eyes of the general public following repeat offences on the front of gender representation at the company, and especially after five years of more PR disasters than I care to count.

DC really needs to start getting it together as a company, and they especially need to start treating women with a lot more respect if they are to have a future as a company that is actually inclusive of diverse readers, including women. Women are not a niche market who only need Batgirl, Supergirl, the Birds of Prey, and Wonder Woman to get their superheroine fix. In my 16 years reading comics, I find that women (myself included) are just as diverse in their tastes as the male readers comic publishers often cater to. Some of us don't in fact want to read about Batgirl, or Supergirl, or the Birds of Prey, even if we may try out those titles. Some of us may in fact want to read about Power Girl, Huntress, and Fury taking over the legacies of their super iconic families. Some of us do actually want to read about the Justice Society characters, and even other characters who are not connected to DC's Trinity, especially Batman. Varied taste does actually exist.

On the note of Batman, DC really needs to stop relying on the image Batman to carry every title they publish as it both limits their audience and robs other (especially diverse) characters of their own spotlight. As popular as Batman may be, Batman fans are not the only people who buy DC books, and DC does a huge disservice to its diverse readers by centring every narrative on a character who conceptually embodies white male power. Additionally, in a narrative as sausage-heavy as Batman's tends to be, it is not acceptable to rob the only woman who actually diversifies this sausage-heavy Wayne family in favour of a male imposter who is not even Dick Grayson in concept, but at the same time, already has more mainstream visibility. In a mainstream continuity that already has a Dick Grayson who was mentored by Bruce Wayne, and is currently fronting two monthly titles as Nightwing, we really don't need this Earth-2 Dick Grayson at all, especially when this character has so little in common with his pre-Crisis counterpart.

If DC's rationale for continuing to push a new Earth-2 Batman at the expense of Helena Wayne and logical storytelling is that he 'makes more money for the company,' a quick look at Earth-2: Society's sales trends should quickly dispel that delusion. Statistically speaking, Earth-2: Society has sold only an average of 24K copies in the direct market within its first year, which is 13K less than what Worlds' Finest (a title fronted by Batman's daughter) made in its first year. The title sold 36K less copies (on average) than the first twelve issues of Earth-2, which sold an average of 60K copies in its first year. That is pretty significant when you consider that the series was fronted at the time by only Green Lantern, Hawkgirl, Doctor Fate, and the Flash. Thomas Wayne did not make his Earth-2 debut until the first Earth-2 annual and issue #13 of the main series, and while sales were still strong, his inclusion did not lead to an increase in sales for the title. Here's another chart that illustrates this point more clearly.

If Batman is the magic character that leads to high sales for DC every single time without fail, then by their own logic, Earth-2's sales trends should've gone up with the additions of Thomas Wayne and Dick Grayson, not down. That the math doesn't support the 'Batman always sells' narrative means that Batman is not the selling point of the series, and may have instead factored into decreased interest in the franchise. Further support for the latter has come in the form of vocal fan reception of the Earth-2 series following the inclusion of Thomas Wayne, which wasn't positive. Complaints of a new Earth-2 Batman usurping a book that was meant to be fronted by the Justice Society characters did not decrease by replacing Thomas with a blanket Dick Grayson character. More often than not, I see Earth-2 fans on Justice Society forums addressing the same problems I always address with his character on this blog, and have consistently asked for his removal than his continued inclusion.

With all that is stacked against this imposter Grayson within the context of the modern Earth-2 continuity, there is very little justification for DC devoting an expensive annual story to this one character, especially when interest in him is remarkably low and sexism comes into question. When you consider how DC is literally going out of their way to give Helena Wayne's story and legacy to a character who hasn't earned it, the likelihood of this annual selling in high numbers is even less likely. This is especially true with only 18K preorders as of issue #11, and it's highly doubtful this annual will even make that amount in August. The time and money that's being wasted on a character so few Earth-2 fans care about could be better spent on a character who could actually benefit from having an annual story told about them.
Posted by Diane Darcy at 22:21