Road to Justice Society Rebirth: What We Know So Far, Week 03 (Spoilers Ahead) 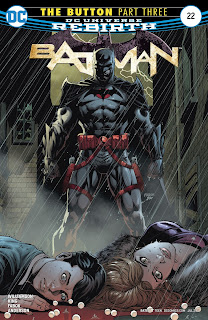 We are on the penultimate chapter of "The Button" this week, and while I didn't expect any Justice Society or pre-Crisis Earth-2 reveals given that this is a Bruce and Thomas Wayne centric chapter, it does setup up for some big reveals for the final chapter. I would say the biggest tease at the conclusion of this week's chapter is--POTENTIAL SPOILER ALERT--a revisit of the pre-Crisis DC Multiverse and we may finally see Doctor Manhattan at last.

The main thing that was emphasised this week is that none of these divergent histories are alternate universes, but alternate histories for the same Earth. This means that Flashpoint is still set in the Prime Earth continuity and didn't branch out into it's own universe as one would expect. The timeline itself still exists somewhere, probably within a pocket dimension of the current Prime Earth timeline, but it's still there.

This at least seems to validate my constant speculation about the relativity of time within the DC multiverse, and I somehow don't think this timeline is gone forever despite--SPOILER ALERT--Doctor Manhattan seemingly destroying it in this chapter. Part of the reason I think this is because Doctor Manhattan is known to make, destroy, change, and reassemble matter, plus he perceives all time simultaneously. I have a feeling all of those character traits are going to factor somehow into his constant erasure and changing of DC characters and history.

Given what we know about the nature of DC's single Earth continuity thus far, the big question now is, where does this leave the pre-Crisis Earth-2? After all, this Earth was designated the home of the Golden Age heroes and history, and it was most notable for being the home of the Justice Society. However, if Rebirth is seeking to streamline all of DC's continuity from the moment Superman appeared in Action Comics #1 in 1938 to now, I wouldn't put it past Geoff Johns to establish that there was never an Earth-1 or an Earth-2 (just the perception of two Earths by DC's heroes), but alternate histories of the same DC continuity running parallel to each other. 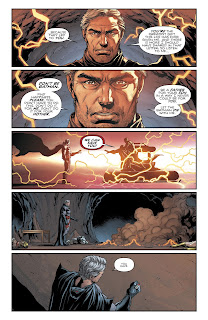 This would certainly be a magnificent surprise that would better explain why the Justice League and Justice Society were able to visit each other's Earths with ease using only Earth technology. And again, relativity of time seems to be at the heart and centre of both of these timelines as well as Rebirth. This is especially true when you take into account that the original Earth-2 characters aged in real time (our time) while the Earth-1 characters remained relatively unchanged since 1955.

At what point did Earth-1 and Earth-2 histories diverge could potentially be the next story arc leading to the big finale (if true), and it could potentially look to put some long forgotten characters back on the board at the conclusion of Rebirth. At least, I hope it does.

Characters like the original Helena Wayne Huntress, Power Girl, and Fury--all with their original histories intact--would definitely be welcome returns. Their returns could even potentially lead to some merging of Golden Age Trinity history with the current incarnations existing on Prime Earth, as radically different as these histories are. Exactly how that could happen could be told in a variety of ways, but I hope to be surprised.

As far as the original Helena Wayne Huntress is concerned, there is one thing the Flashpoint Thomas Wayne said in today's issue that could potentially hint at a revisit of Bruce's Golden Age/Earth-2 history:


You were my world, son. I delivered you myself...and the moment I saw you...I knew every choice I'd ever made had been the right ones...because they led to you. You're the greatest givf this life has ever given me. And there is more I should've shared in that letter, so listen to me...don't be Batman. Find happiness, please. You don't have to do this. Don't do it for me. Don't do it for your mother. Be a father for your son in a way I never could be for you. Let the Batman die with me.

This is pretty significant and I refuse to believe any of this was written by accident. All of what Thomas is describing here is exactly what the original incarnation of Bruce Wayne from Golden Age comics did later in his life on the pre-Crisis Earth-2. Within his relative history, Bruce did learn to move on from the deaths of his parents. He did stop being Batman. He did marry the love of his life--Selina Kyle--and found happiness with her. He especially became the father to both his own daughter and Dick Grayson that Thomas could never be for him because he died when Bruce was only ten. 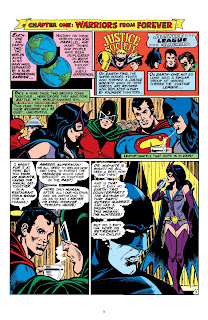 If the current incarnation of Bruce does not know how to live up to his father's words, then perhaps it is time for him to pay a visit to his original Golden Age incarnation who is the father of Helena Wayne. Perhaps now is a good time to especially bring the original Helena Wayne Huntress back into mainstream continuity to be his inspiration once again just like she was pre-Crisis. In the same way that Helena embodied Bruce's happiness and hope for his future, she could once again fulfil that role.

By placing Helena permanently into the fabric of the new Prime Earth continuity, she can continue to be Bruce's reminder that he can lead a happy life, and that he can be a good father to Damian, and all the other kids that he has raised and mentored. I know I would love that tremendously. Not just for the obvious fact that I'm a huge Helena Wayne fan, but it would definitely make the Prime Earth Bruce a more likeable character to me once again. It would definitely get me invested in his story once again.

I haven't been able to care about Bruce's story for the last fifteen years precisely because he stopped being interesting to me. Not only did DC prevent him from moving on to a new chapter in his life for any lengthy period of time, but he increasingly felt less human to me. I got to a point where I just couldn't connect with him in the comics anymore. He was largely all "male-power fantasy" and a lot less like a person with real thoughts and emotions. At points, he even felt too "god-like" depending on the writer.

Restoring Bruce's humanity and allowing him to connect emotionally with others in a more meaningful way that doesn't keep them at a distance is definitely a good start, in my opinion. We did see some of that in today's issue when he encountered the Flashpoint version of his father, and could see more of it in the future if pre-Crisis Helena Wayne is the next step from here. I would especially love to see how his encounters with both Thomas and Helena affect his relationships with his current family.

It's unfortunate that we have to wait two weeks to read the final chapter of "The Button," but looking at how all this has been unfolding so far, I'm feeling wildly optimistic and excited in a way I haven't felt since Convergence in 2015. In fact, I'm increasingly feeling like Rebirth is Convergence done right.