Doomsday Clock vs Justice League: Two Competing Entities for the Evolution of the DC Multiverse 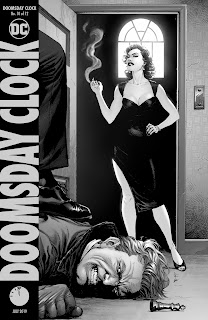 Doomsday Clock #10 came out this past week, and I have to say this is the first issue I've genuinely enjoyed since the series first launched in 2017. I won't get into Doctor Manhattan's role in this story too much in part because I feel Geoff Johns has been using the character in ways that don't fully understand the purpose of his character in Watchmen, and in part because I want to focus on the details that matter most to me in this story: the history of the DC Multiverse and specifically how that changed over a period of time.

Geoff Johns shifted focus back to the DC Universe in Doomsday Clock #8, but it is actually in Doomsday Clock #10 where we start seeing answers to some of the questions first posited in DC Universe Rebirth #1 in 2016, some of which seem to intersect with events happening in Scott Snyder's Justice League. There will be spoilers throughout this post for both Doomsday Clock and Justice League. If you aren't caught up on either series (or both) this is your stopping point to give you the chance to catch up. If you are all up-to-date, proceed to the next paragraph.

The entirety of Doomsday Clock #10 is told from Doctor Manhattan's point of view and takes place shortly after his arrival to the main DC Earth. On his first day, he witnessed Superman's arrival in 1938 (the start of DC's Golden Age), but also witnessed the timeline changing and diverging in real time. One minute, Superman is a world sensation in 1938, then suddenly he isn't. Superman arrives again in 1956 (the start of DC's Silver Age), and he is once again a world sensation, then suddenly he isn't. Superman then arrives again in 1986 (the start of post-Crisis DC), darker and angrier than before. 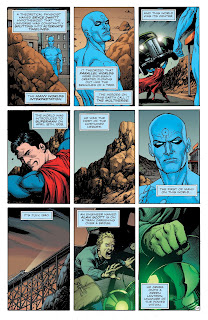 As the most self-aware entity in the known multiverse, Doctor Manhattan is immediately aware that someone or something has been manipulating Superman's timeline throughout history, each time moving him forward in time and restarting his timeline. He also realised that changes made to Superman's timeline affected the world and people around him, even resulting in the creation of the DC Multiverse.

However, Doctor Manhattan doesn't believe that the single Earth from 1938 diverged to create the one from 1956, resulting in the Earths 1 and 2 we previously knew. Instead, he believes the Earth that started in 1938 is separate from the rest of the multiverse, serving as the base template for the multiverse we know. Whenever changes are made to the base template (what Doctor Manhattan calls 'the metaverse'), the multiverse in turn reacts to those changes, which explains why Earth-2 (the more significant parallel Earth to the main one) changed the way that it did, both post-Crisis and post-Flashpoint.

Having witnessed this phenomenon for himself, Doctor Manhattan revealed that he got curious and decided to 'have a go' at manipulating the lives of the DC Universe characters, reimagining them in his own image, resulting in the current New 52 Universe. One of the first actions he took as the DC Universe's newest editor was letting Alan Scott die in the same train crash that allowed him to become the Green Lantern in 1940. He achieved this by removing the lantern containing the green flame that originally saved his life. 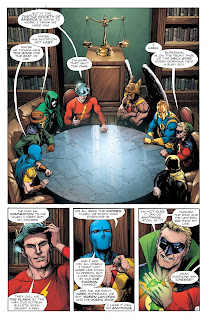 With the death of Alan Scott, Doctor Manhattan prevented the formation of the Justice Society, effectively allowing Superman to become the world's first superhero again post-Flashpoint. This also allowed him to manipulate events in Superman's life in order to make him 'more alien', which resulted in a Superman Doctor Manhattan could relate to.

Undoubtedly, this is Geoff Johns' own meta commentary on cynical people dismissing Superman as 'unrelatable' and always wanting to change him so that he matches their idea of a relatable superhero. Ironically, however, instead of a 'new and improved Superman', we ended up with a Superman who is far removed from the core philosophy that drew people to him in the first place. Instead of a 'more relatable' Superman, we ended up with an insufferable arsehole in a blue suit who is wholly unrecognisable as the beacon of hope we associate with the wearer of 'The Big S.' The changes Superman experienced during the New 52 rippled to every DC Universe character, including the ones residing on Earth-2.

All of this sounds like a logical explanation for the way the DC Multiverse has changed over the decades, and it certainly makes sense for the way both the post-Crisis and post-Flashpoint continuities panned out. However, the metaverse explanation does not actually match up with the way the pre-Crisis multiverse came to exist and actually contradicts pre-Crisis history. Whereas Doomsday Clock #10 implies that the original DC Universe was never split into an Earth-1 and an Earth-2, actual pre-Crisis history made it clear that Earth-2 was in fact the original DC Earth that started in 1938, while Earth-1 was simply the more modern DC Earth that started in 1956. 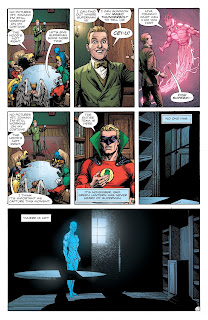 Unlike Doomsday Clock that argues that Superman simply moved forward in time from the 1930s, resulting in his erasure from Golden Age history, actual pre-Crisis history explained that the Golden Age Superman never disappeared in 1938, but simply existed on a separate Earth from his Silver Age counterpart that appeared in 1956.

The original pre-Crisis explanation made more sense because by having the Golden Age and Silver Age versions of Superman exist on separate Earths, it allowed both versions of his history to exist intact without having to do any major retcons to explain why Superman hasn't aged the way he should have by 1956, among other things. So why would Geoff Johns make that retcon if his goal is to validate ALL of DC history and not just the last 32 years of it? Well, the answer to that may in fact lie in Scott Snyder's and James Tynion IV's Justice League #22, which not only details the origin of the pre-Crisis multiverse, but also establishes the existence of a prime universe that seems to coincide with Geoff Johns' metaverse concept. 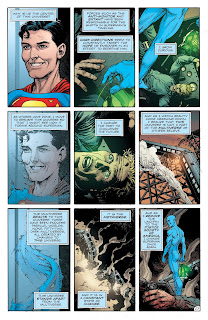 Since the launch of Scott Snyder's Justice League series in 2018, Snyder has been elaborating on his ideas further by establishing an actual creator of the DC Multiverse—a character named Perpetua—and even gave origin stories to the Monitor, the Anti-Monitor, and the World Forger, all of whom turned out to be the sons of Perpetua.

Neither son suspected what their mother was really up to until they discovered on their own what she was planning to use the multiverse for. It turned out Perpetua had outlived her function as the mother of creation and started experimenting with the source of creation in ways her superiors wouldn't approve. Rather than go down with their mother and see their own creations destroyed, the three brothers notified her superiors of her actions and her superiors created the Source Wall as her prison.

Cut off from the rest of the omniverse, Perpetua's sons were reborn with a brand new DC Multiverse devoid of Perpetua's influence. This new incarnation resulted in the pre-Crisis DC Multiverse. The World Forger and Monitor resumed their original responsibilities, resulting in the events that became the pre-Crisis timeline. With the existence of the Source Wall, however, this left the Anti-Monitor without a role to fulfil, which is a sacrifice the Monitor was aware of and went along with to protect himself. This betrayal from the Monitor motivated the Anti-Monitor to destroy his brother's multiverse in retaliation, resulting in the events of Crisis on Infinite Earths. 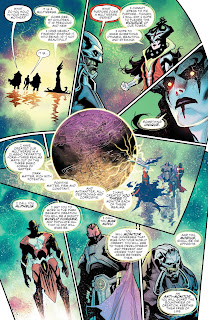 From what Justice League has established thus far, Scott Snyder appears to be building off of Geoff Johns' metaverse concept. In Justice League, Snyder establishes that the pre-Crisis multiverse as we know it isn't the original multiverse, but the one that got made after Perpetua was imprisoned into the Source Wall. Just what exactly was that original DC Multiverse?

Johns may have detailed that original incarnation in Doomsday Clock #10, which would at least coincide with Justice League establishing Perpetua as the original creator of the multiverse before it led to the creation of the pre-Crisis multiverse. It would also effectively explain all the changes Doctor Manhattan witnessed when he first arrived in the prime universe without necessarily rewriting the events of the pre-Crisis timeline. At what point did the pre-Crisis multiverse emerge is yet to be explained, but I hypothesise it happened sometime between the end of DC's actual Golden Age and the start of DC's Silver Age, resulting in the emergence of Earths 1 and 2 as we know them.

Since the events of Crisis on Infinite Earths, the DC Universe has continued to undergo changes, eventually resulting in the rebirth of the DC Multiverse. At the centre of these changes has been the World Forger, who has been working to create the perfect DC Universe, or perhaps—in Johns' own terms—the perfect metaverse with the goal of creating a better DC Multiverse. This is literally the storyline of the current Justice League story arc 'The Sixth Dimension.' 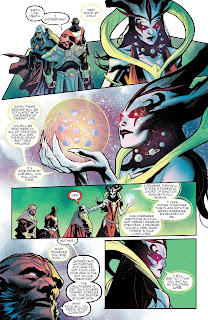 The idea of the metaverse is certainly a new and interesting concept. I particularly like that both Doomsday Clock and Justice League acknowledge Superman as the heart and soul of the DC Universe since he plays a critical role in both books. In Doomsday Clock, he is the target of Doctor Manhattan's experimentation, and in Justice League, the World Forger wants him removed so that he doesn't interfere with his own plans to create the perfect world.

Despite the interesting ideas both Doomsday Clock and Justice League are building toward, it is still worth asking if this new concept will explain the evolution of the DC Multiverse in a way that validates all of its actual history. If it doesn't, will it turn out to be a major retcon that will once again rewrite DC history as we know it for generations to come like both Crisis on Infinite Earths and Flashpoint did before it? Only time will tell, but I am certainly interested in seeing what comes out of it.
Posted by Diane Darcy at 00:00