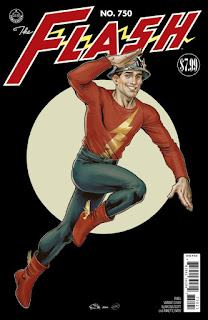 This week, The Flash #750 celebrated the Flash's 80th anniversary, and out of the entire collection of stories featured in the special, only three of them added new chapters to the upcoming Earth-5G initiative: the main Flash feature from Joshua Williamson's run, the Jay Garrick Flash story taking place in Keystone City in 1940, and the epilogue to the recently concluded Flash Forward miniseries, which is also functioning as the prelude to DC's upcoming FCBD 2020 offering: Generation Zero: Gods Among Us.

The Jay Garrick story 'At the Starting Line' by Joshua Williamson and David Marquez actually picks up from the Wonder Woman #750 story set in 1939, 'A Brave New World', by Scott Snyder and Bryan Hitch. In that previous story, Princess Diana made her public debut as Wonder Woman just as World War II was starting, which subsequently inspired Alan Scott (who had just recently become the Green Lantern that year) to operate publicly as a superhero as well.

In the Jay Garrick story, a year has passed since Wonder Woman's debut in the new DC timeline, and World War II just started. His origin is recounted and he is seen fighting one of his iconic villains, the Thinker. During the fight with the Thinker, the Reverse Flash whispers in Jay's ear that he will be forgotten in the post-Flashpoint timeline.

Prior to the Jay Garrick story foreshadowing a future Flash storyline, the main feature continuing from Joshua Williamson's Flash run also acknowledges past events from DC's past continuities: the first meeting of Barry Allen and Jay Garrick in 1961, which established the pre-Crisis multiverse, and their worlds as Earth-1 and Earth-2 respectively. The same sequence also established how frequent travel between parallel realities left those worlds vulnerable to the Anti-Monitor's attack, resulting in the events of Crisis on Infinite Earths that merged the original multiverse into a single Earth with a single history. 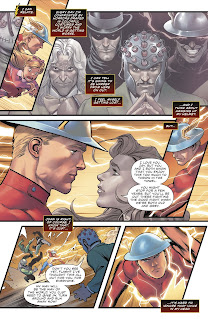 The events of Flashpoint are also acknowledged, and how Barry's attempt to change his own history created damaging ramifications to both the main DC timeline and the lives of various people, not just the ones closest to him. This actually ties into the Flash Forward epilogue at the conclusion of the book that places Wally West (one of the casualties of Flashpoint) in a position of power to repair or alter the multiverse's history based on what he feels these individual worlds should be. He specifically notes that while the multiverse can account for discrepancies in history, many of the discrepancies in history have been happening to a single Earth: the post-Crisis Earth.

Exactly what all of this means for the DC Multiverse moving forward is still a mystery, and possibly now up in the air with Dan DiDio no longer in charge. At best, The Flash #750 anniversary special is still building on the foundation Geoff Johns established at the conclusion of Doomsday Clock last year. In Doomsday Clock, Johns established that the main DC timeline is actually a metaverse that spawns new worlds whenever changes are made to it. This actually makes sense.

When the original DC Universe first formed with the first appearance of Superman in 1938, this created a history set primarily in World War II. The first change that came to the DC timeline that significantly diverged from the one that came before was the first appearance of Barry Allen as the Flash in 1955. This seemingly erased the original Jay Garrick Flash from 1940 and relegated him to existing as a comic book character in Barry's world.

By 1961, Barry travelled the multiverse for the first time and ended up in Jay's world, which explicitly established the existence of the DC Multiverse. Barry's world got designated Earth-1 while Jay's world got designated Earth-2. Earth-2 then became the world that continued the DC Universe that started with Superman in 1938 and explored the concept of generational legacy with new younger heroes emerging in the later decades to take the place of their World War II predecessors. On Earth-1, heroes like Superman, Batman, and Wonder Woman were just starting out for the first time, explicitly establishing their World War II predecessors as residents of Earth-2. 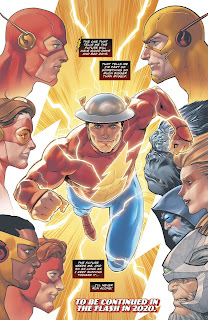 With the growth of the multiverse also came its subsequent collapse with Crisis on Infinite Earths, which merged all of these worlds into a single Earth with a single history, but it also created a paradoxical timeline, complete with anomalies like Power Girl, the Psycho-Pirate, and other characters who were not successfully integrated into the new Earth history. This new post-Crisis Earth was highly unstable, resulting in the constant changes to history as seen in Zero Hour, Infinite Crisis, and now Flashpoint in attempts to correct the paradoxes. All of this resulted in the creation of a new DC Multiverse all together, but one that was now linked by the changes made to the post-Crisis Earth.

This now seemingly gets us to Earth-5G which is a new Earth being spawned from events happening on the post-Flashpoint Earth, which in essence, is still the post-Crisis Earth. Exactly what changes we can expect to see happen in the new DC timeline with Jim Lee now solely in charge, I guess we'll have to wait and see. But if there is one thing I am definitely sure of now is that Power Girl will once again be reinstated as an Earth-2 survivor of Crisis on Infinite Earths in the new DC timeline, with the original Earth-2 Huntress once again re-established as a casualty of that same Crisis.

If Helena Wayne does make a comeback on Earth-5G, I'm pretty sure it will be the pre-Crisis original from Earth-2 who will be making that comeback as she is still the mainstream version of that character. If DC doesn't end up following up on the teaser from Doomsday Clock #12 that sees Superman look for 'the lost daughter of Bruce Wayne', it will probably most likely happen in the main Justice Society book in a Power Girl-centric storyline.