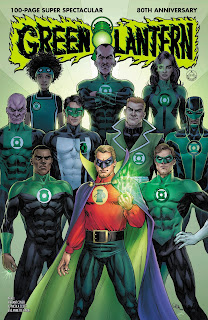 June is Pride Month, and while I was thinking of doing another 'Top 5s' list for Helena Wayne's most queer moments in comics this year, I decided to focus on one of her oldest friends instead. Another fellow member of the Justice Society of America who also happens to be one of my favourite DC characters!
Just in time for Pride Month, and just in time for celebrating the original Green Lantern's 80th Anniversary, we look at Alan Scott's original origin story in All-American Comics #16, as well as the updated version of that story featured in this week's Green Lantern 80th Anniversary Special #1 by James Tynion IV and Gary Frank!
In case this needs saying, spoilers ahead for both All-American Comics #16 and Green Lantern 80th Anniversary Special #1!
In All-American Comics #16 first published on 03 July 1940, Alan Scott makes his debut as the Green Lantern! In the story 'The Origin of the Green Lantern' by Bill Finger and Martin Nodell, Alan's bid to build a new bridge in the American west is chosen by the US government. On the day that Alan tests the bridge to ensure its safety, an explosion occurs, and the train carrying both Alan, his companion Jimmy, and a few other men crash into the desert ground below.
Out of all the passengers, Alan is the sole survivor, seemingly saved by the mysterious green lantern he held onto as the train crashed. A mysterious light then begins to emanate from the lantern, and Alan passes out. While unconscious, the seemingly sentient lantern begins to tell Alan its origins, and about the three prophecies it must fulfil before a new wielder of the green flame could be chosen: death, life, and power. 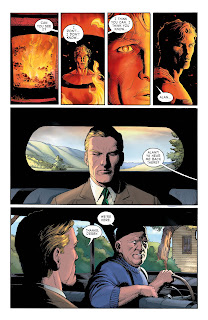 It started with a meteor crashing into Ancient China, and it's mysterious green flame melting the alien metal it came in. The Chinese people are fearful of its mysterious properties, but a lamp maker named Chang decides to craft a lamp out of the burnt metal. Shortly after he makes the lamp, however, he is brutally murdered by his fearful neighbours, fulfilling the first prophecy of death.
Centuries later, the ancient Chinese lamp finds its way into a bin in America, which is then recovered by some guards at a mental institution and given to one of the inmates, an old man known only as 'Billings.' Taking a liking to the Chinese lamp, Billings restructures it into a train lantern, and is then promptly cured of his mental illness, fulfilling the second prophecy of life.
The lantern at some point finds its way into Alan Scott's hands, choosing him as his champion to battle evil. The lantern then bestows upon Alan the powers of the green flame, fulfilling the third prophecy of power. Realising he needs to seek justice for his murdered colleagues, Alan uses the power of the green flame to capture Dekker (his rival who sabotaged his bridge) and force him to confess his crime to the police. Shortly after Dekker signs his confession, he dies of shock. Alan then sees this as his calling to continue fighting injustice as the costumed vigilante known as the Green Lantern.
In the story 'Dark Things Cannot Stand the Light' featured in Green Lantern 80th Anniversary Special #1 by James Tynion IV and Gary Frank, we see a follow-up to Alan's classic origin story that focuses on the other passenger Alan was with the day the train crashed: the deceased man known as Jimmy. Tynion and Frank elaborate on Alan's relationship with Jimmy, implying that the two men were lovers. This seemingly confirms that Alan Scott will be a closeted gay man in the main DC continuity, or at least bisexual since he still marries Rose Canton (the mother of his two children Jennifer-Lynn Hayden and Todd Rice), and will possibly still marry Molly Mayne later on in his timeline. 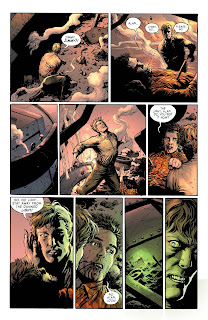 This is an interesting take on Alan's classic origin as it does not erase what came before, but still found a way to implement one of the few positive changes that came out of the New 52, which was making Alan Scott a queer character. Tynion and Frank especially gave a backstory to an originally throw-away character that had little agency in a way that still built on the original story.
In the original story from All-American Comics #16, Alan was seen carrying the lifeless body of Jimmy, and in Tynion and Frank's story, Alan meet's Jimmy's mother for the first time, the latter implying she's always known that her son was gay. It is also implied in Tynion and Frank's story that Alan got the green lantern from Jimmy himself, who has always been aware of the lantern's mysterious energy. This seems to be giving a new meaning to a panel in the original All-American Comics #16 story where Alan described the lantern's green light as a 'queer light.' The green lantern then ends up becoming a metaphor (perhaps even a symbol) for queer identity in a world plunged in constant darkness in the story by Tynion and Frank.
Even the title of Tynion and Frank's story is an homage to Alan's original oath in All-American Comics #16 where Alan stated 'I shall shed my light over dark evil...for the dark things cannot stand the light...the light of the Green Lantern!' In this case, Alan's oath seems to take on a new meaning as well, especially as a queer man about to go out into the world to fight injustice in a decade where it is violently enforced upon marginalised communities before, during, and after World War II. This is especially is encapsulated by the death of Jimmy, who even ends up being an homage to Alan's New 52 boyfriend, Sam Zhao, who also fulfilled the 'bury your gays trope' as a way of motivating Alan into becoming the Green Lantern.
Whatever is in store for Alan Scott in the post-Death Metal DC Universe, I do hope that he gets a miniseries that better fleshes out his new history, and further explores his experiences as a queer man in the early 20th century. This story by Tynion and Frank, while good, should not be the only time we see this aspect of Alan's character explored, and it shouldn't be the only time we get a Doiby Dickles appearance! (No, I was not about to forget to mention Doiby's cameo in this story!)