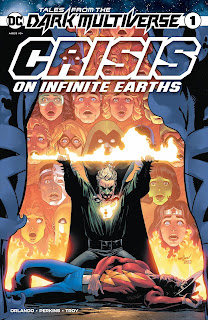 Tomorrow, Tales from the Dark Multiverse: Crisis on Infinite Earths #1 comes out alongside Dark Nights: Death Metal #6, with Earth-2 taking centre stage in tomorrow's one-shot. True to the form of the Tales of the Dark Multiverse series, tomorrow's Crisis one-shot will explore a universe where Earth-2 survived the onslaught of the multiverse's destruction in the hands of the Anti-Monitor instead of Earth-1. What happens on a world where the Justice Society survives and is remembered, but the Justice League is erased and forgotten? What happens when it is the Earth-1 Superman and Lois Lane who end up in the pocket dimension instead of the Earth-2 couple? How do events of the post-Crisis New Earth play out differently with the Earth-2 heroes at the helm instead of their Earth-1 counterparts?

Writer Steve Orlando and artist Mike Perkins explore all of these questions and more in their Dark Multiverse tale, out 15 December 2020! Check out the teaser image below for a glimpse of things to come! 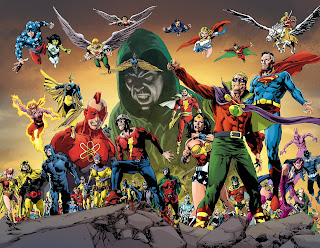 Become a Patron!
Posted by Diane Darcy at 10:00