Tales From The Dark Multiverse: Crisis On Infinite Earths #1 Review 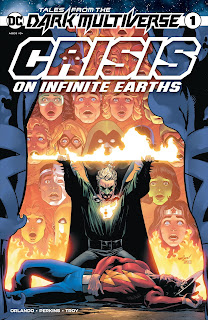 Summary: Welcome to a universe where the events of Crisis on Infinite Earths resulted in the destruction of the infinite multiverse, but instead of a New Earth being forged with Earth-1 as the base template, Earth-2 takes on this role. No longer acknowledged by history, the Justice League of America put up a fight against the infant Earth's newest threat, Surtur, but they are no match for the fiery giant who quickly disposes them. Now standing up in defence of their new Earth, the Justice Society of America joins forces with Infinity Inc, the Seven Soldiers of Victory, and the Freedom Fighters as the new All-Star Squadron to take down the fiery giant once and for all. But do they have the strength and power to do so without any casualties of their own? Welcome to the Dark Multiverse, where familiar events from the multiverse above top take a sharp turn for the worst in the multiverse below!

Review: Before we begin this review, let's start by addressing the elephant in the room: this is a Dark Multiverse story! As one can expect from a story with this premise, the tone is going to be dark, deaths are going to be abound, and your favourite characters are not going to be safe from brutality. That being said, Tales From The Dark Multiverse: Crisis On Infinite Earths #1 is nothing like Earth-2: World's End from 2014 where it was just mindless death and destruction with no care or respect for the Justice Society characters. This is not that story! 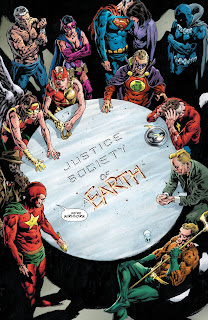 Instead, Dark Multiverse: Crisis meaningfully explores a possible timeline of what could've happened had Earth-2 served as the base template for the post-Crisis New Earth instead of Earth-1, and how Justice Society history could've panned out as a result. It is honestly not half bad! In fact, it turned out better than I expected.

One of the strengths of Dark Multiverse: Crisis is that it is ripe with powerful character moments that make the reader care for the plight of the Justice Society heroes and the sacrifices they end up making to secure a better future for their loved ones. The story especially gives the spotlight to characters who were casualties of the original Crisis on Infinite Earths event of 1985 as they were the characters that were robbed of their futures. Characters like the original Helena Wayne Huntress, Fury, Hawkgirl, and the original Aquaman from Earth-2 are given opportunities to shine. More importantly, they are the characters that get to survive in order to showcase the reader how their stories could've panned out post-Crisis.

In the case of the original Helena Wayne Huntress, we are shown that she would've eventually updated her Huntress costume to the one she wore post-Flashpoint, effectively merging her pre-Crisis and post-Flashpoint timelines in a symbolic manner. She still retains her original identity as Helena Wayne, but reminds the reader that her identity as the Huntress is about honouring both sides of her family legacy on her own terms. The decision to update her Huntress costume to the post-Flashpoint version reflects Helena Wayne's commitment to continue forging her own legacy. 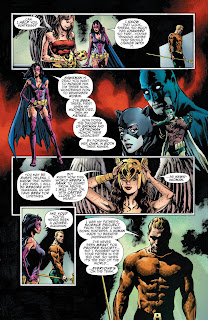 Fury is perhaps the character who was given the most thought as to whom she would've eventually become had she remained the daughter of the Earth-2 Wonder Woman and Steve Trevor post-Crisis. In the first issue of Infinity Inc from 1984, we learnt that Lyta Trevor originally wanted to take up her mother's mantle as the new Wonder Woman, but was originally denied the mantle on the grounds that her mother felt she wasn't ready for it yet. Writer Steve Orlando picks up on this plot thread from Infinity Inc and writes a follow-up to it in a heartfelt scene where Wonder Woman posthumously gives her daughter her blessing to take up her mantle, feeling that she is now ready to be the Wonder Woman the world needs her to be.

Another character that gets a significant upgrade to her identity is Shiera Hall, the wife of Carter Hall (Hawkman) and the mother of his son Hector (Silver Scarab). Having originally fought alongside her husband as Hawkgirl, Shiera contemplates how to best honour the legacies of her husband and son when they both die at the hands of Surtur. After a heartfelt conversation with Helena Wayne who shared with Shiera her reasons for becoming the Huntress following the tragic death of her family, the latter becomes inspired to wear her husband's old helmet and continue to fight in the memory of her son and husband as Hawkwoman. This was also the identity of her Earth-1 counterpart, Shayera Hol.

The rest of the Justice Society heroes also get opportunities to introspect and reflect on the brutal deaths of their loved ones as they figure out how to best stop a dangerous god-like being they have so far failed to defeat. Two things are significant about this: the first is it affords the Justice Society heroes a moment of vulnerability to remind the reader of what makes them human and what motivates them to protect their world the way that they do. The second thing it does is showcase to the reader what makes the Justice Society one of the greatest superhero teams in the DC Multiverse, and that is their willingness to make sacrifices to secure a better future, not just for their loved ones, but even for the people they don't know. 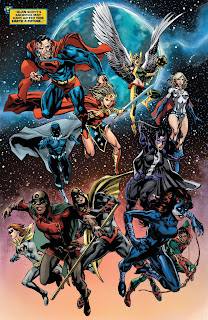 By far, the most heartbreaking sacrifice in Dark Multiverse: Crisis came from Alan Scott (Green Lantern), who not only revealed to his son that he himself is gay, but that he is also aware of his son's homosexuality. Alan spent his entire life hiding a huge part of his identity because he lived in a time where the world was not willing to accept people like himself. He didn't want that same future for his son, and more importantly, didn't want the world to end before his son had the chance to be his true self and live his life to the fullest with someone he actually loves.

Realising the combined strength of the Justice Society was not enough to stop an entity like Surtur (who's sole purpose is to make Ragnarök happen), Alan made an unprecedented move: he bargained the destruction of other worlds in the universe in exchange for Surtur leaving Earth. It was far from an easy decision for Alan to make as he would never live with himself for the death and suffering he was about to cause. But Alan didn't act in self-interest, but as a gay parent to a gay son who wanted to secure a better future for that son and others like him. This made an otherwise abominable decision marginally redeemable on the grounds that Alan acted as a human being and not as a superhero.

With a title like Tales From The Dark Multiverse, as a reader, you know that this story is going to end tragically under the worst of circumstances. But the creative team of Steve Orlando and Mike Perkins manages to take an otherwise dark and grim concept, and mould a human story out of that premise. More than Dark Multiverse: Crisis upset me with the brutal deaths of various Justice Society characters (which included some of my favourites), the story actually left me feeling sad for Alan Scott, but hopeful for the future generation of Justice Society heroes.

Become a Patron!
Posted by Diane Darcy at 11:00