The Best of the Huntress: Wonder Woman #285 Review 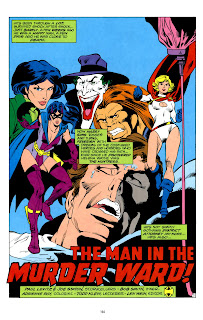 Summary: Following his encounter with the Joker, Gotham district attorney Harry Sims finds himself in the hospital recovering from Joker toxin poisoning. He has recurring dreams about Helena Wayne as the Huntress, Power Girl, and the Joker. Upon waking up, Harry finds himself surrounded by hospital staff and even his girlfriend, Helena Wayne, in her civilian identity. The doctor asks all staff to leave the room in order to give the couple some privacy. Helena greets Harry with a hug and goes on to tell him he doesn't need to worry about the Joker anymore as she succeeded in apprehending him. While Harry is grateful for Helena's rescue, he still tells her that he finds her vigilantism a problem for their relationship and doesn't believe he can keep loving her with this knowledge.

Later that day at Helena's apartment, Dick and Helena are seen working out together. During their exercise routine, Helena tells Dick about Harry being unable to accept her life as the Huntress. Dick validates Helena's concerns but also tells her that as long as she continues her father's work as the Huntress, she'll always have trouble finding an 'ordinary man' with whom she can have a successful romantic relationship. He goes on to say the reason Bruce (her father) was able to marry Selina was because she understood and accepted him as he was, implying that Helena is going to have to date a man who shares her lifestyle if she is going to have the same chance her parents had. At that moment, both individuals start looking at each other under a different light, suggesting a newfound romantic attraction. Their silent gazing, however, is interrupted by Helena's phone ringing.

The phone call is coming from the hospital and the speaker on the other end is none other than Harry Sims who is being attacked by an inmate who is attempting an escape. Dick and Helena quickly suit up and make their way back to Gotham Memorial Hospital. At the hospital itself, the staff try to get everything under control but with very little success as they are very frightened themselves. Huntress and Robin burst in just when the inmate (identified as Carson) is threatening to pull the intravenous tube that is keeping Harry alive. He tells the dynamic duo that he was one of the inmates that got injured during Lionmane's attempted prison break and woke up next in the hospital with the goal of escaping. Upon finding out that one of the patients at the hospital was Harry Sims (the same one that put him in prison), he decided to hold the DA hostage to guarantee his way out.

Helena (as the Huntress) offers to take his place as his hostage in exchange for Carson leaving Harry alone. Neither Dick Grayson nor Harry are comfortable with the idea, but Helena insists on going forward with her plan. She asks Dick to tie her up, but her plan is thwarted by Harry deciding to take out his own tube and put up a fight for his own life. Helena dislikes the fact that he did that, but sees no point in arguing since Harry immediately passes out after striking Carson. At that point, Helena goes full force and beats down on Carson, threatening to kill him if Harry ends up dying from the encounter. Carson is beaten unconscious by the Huntress and is eventually detained by police. 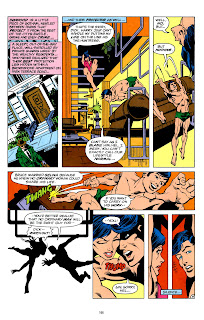 Harry wakes up hours later with the Huntress, Robin, his doctor, and one nurse in his presence. He asks that all visitors leave, except for the Huntress whom he wishes to speak to in private. Helena calmly scolds Harry for risking his life the way he did since she had the situation under control and was only planning to get close enough to Carson to incapacitate him. Harry once again voices his opinion that he is not comfortable with Helena risking her own life in pursuit of justice, especially since she can be killed at any moment, effectively ending any future they may have together. He then informs Helena that when he recovers, he's planning on going away for a while to rethink his relationship with her, and if he has the guts, he'll come back to her.

Outside the hospital, Helena voices concern to Dick that Harry may have broken up with her without making it sound so final. Dick says that he understands where he is coming from and that he has a lot of thinking to do. He also tells Helena that he has some thinking to do as well since he's finding himself romantically attracted to a woman he used to think of as a baby sister. Between Harry breaking up with her and Dick wanting to put some distance between himself and her, Helena is left feeling even more bummed than before.

Review: There are two things that happen in this one story regarding Helena Wayne's character. The first is writer Paul Levitz establishes in this chapter that Helena Wayne can and will threaten to kill anyone who causes harm to someone she cares about. Though most likely a knee-jerk reaction to the situation at hand, it's still not an insignificant detail since she's already demonstrated once before that she doesn't mourn the deaths of criminals who accidentally die during in an altercation with her. This same theme also gets explored once again in another story arc that ironically follows this one, and once again during the Joey Cavalieri era where she is depicted as less sympathetic towards criminals.

Helena Wayne being written as the 'willing-to-kill' type is a significant detail for two reasons: one, it goes back to the fact that she is the daughter of the Golden Age Bruce Wayne, who originally killed criminals (usually mobsters) in his very first years as Batman. The second reason this detail is significant is because it started to push the limitations of the Comics Code of Authority at the time. Two of the things that were forbidden by the code was any portrayal of crime as desirable or heroic (even if it was a case of the hero justifiably killing the villain) and questionable portrayals of authority figures such as police officers. Though Helena was never depicted actively killing any criminals during the pre-Crisis era, writers at the time still found ways around it, usually in the form of the villains dying in a completely circumstantial way. Even when Helena did actively threaten to kill her enemy and actually meant it (like it will in another story), she was eventually prevented from going all the way.

The other significant development that gets explored here is Helena Wayne's relationships with the two most significant men in her life right after her father: Dick Grayson (her father's ward), and Harry Sims, her boyfriend. Both men are established as love interests for Helena in this story but she relates to both men very differently. She clearly values having both men in her life, but she finds that she can be her authentic self a lot more when she's with Dick, whereas she has to hide more of herself around Harry, even with him already knowing her secret. The fact that Helena finds Dick's company much more freeing undoubtedly facilitated her attraction to him, but the thing that keeps her from obtaining a closer relationship with him is the fact that he was also raised like a son by her father. As such, it's hard for both her (and Dick for that matter) to completely shake off the fact that they initially think of each other as siblings. That detail also makes it hard for the reader to root for them as a couple, even if everything else about them makes perfect sense. 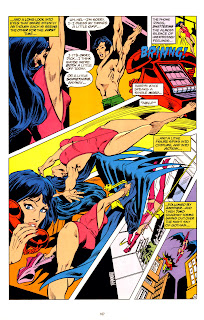 On Harry's side of things, Levitz does present him as being reasonably conflicted about discovering his girlfriend's identity as the Huntress. The problem here is that, as a reader, I can't find myself caring for either Harry or Helena's dilemma because they never had any chemistry to begin with. It was a very much a case of forcing two characters who have nothing in common (except for working in the same profession) together and deciding they have a relationship instead of developing both characters to the point of being romantically involved. There's also the fact that Harry is written as having very patriarchal views of relationships with women, and his sexism especially becomes more overt when Joey Cavalieri takes over as writer. As such, it's hard for me as a reader to actually root for these two people as a couple.

More than anything, I considered it a blessing when Harry broke things off with Helena in this story because it left her open to pursue relationships with better people (especially Kara). Whether it was intended by the writer to get readers to root for Dick and Helena instead Helena and Harry it isn't really known. But it is worth noting that Helena does have a lot more chemistry with Dick than she does with Harry, and this is only the second time Dick actually appeared in a story with her. The first time we saw them interact was in Adventure Comics #461 three years earlier.

For the most part, this issue is centred on exploring Helena's love life and how being a superhero conflicts with that. Beyond that, the villain for this story, Carson, truly serves no real purpose other than to bring Helena back to the hospital and rescue her boyfriend for a third time. Had he been left out of the story, it would've had no significant impact on the theme of Harry feeling conflicted about his relationship with Helena. At best, Carson allowed Helena to showcase that she's a very smart and confident heroine who fights to protect the people she loves. However, considering Carson isn't really presented as smart in this story, that's not really much of an accomplishment.

One thing that Levitz often struggles with when writing villains is that they never come off as truly threatening except in a really cartoony sort of way. They're always presented as being less intelligent than the lead heroine, which makes them easy for Helena to defeat. That's very much what happens in this story. Other than fulfilling the action quota, Carson as a villain is pretty forgettable and doesn't contribute to Helena's development in any meaningful way. The primary source for Helena's character growth in this story is her relationships with Dick Grayson and Harry Sims, both of which cause her to question her lifestyle choices and whether or not being a superhero is worth sacrificing everything else she values in her life.