The Best of the Huntress: All-Star Comics #71 Review 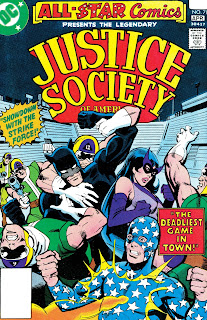 Summary: Picking up where the last issue left off, Wildcat, Star-Spangled Kid, and the Huntress are all surrounded by the Strike Force. Huntress rationalises that under the current circumstances, it really makes no difference if they strike first or not because the people they're up against them are going to attack them anyway. Seeing no merit in talking things through, Huntress decides to attack first thinking that if they take initiative, they can at least eliminate some of the Strike Force's numbers and the rest will be easier to manage. Wildcat doesn't like taking orders from a woman, but Kid sees no point in arguing with the Huntress and goes along with her plan. Wildcat eventually follows suit since he at least gets to punch some guys down, which is something he enjoys doing. Helena confirms that she is not trying to give orders, but is merely trying to 'be a part of the team.'

Together, the trio manage to subdue the group they are up against, until one of the Strike Force members brings forward a blaster carrier that was never authorised by the US military to go into production. Realising they are all out of their depth with this deadly weapon, the Kid stands in the way of the blaster's first firing to give Huntress and Wildcat enough time to escape. Wildcat is against the idea of deserting a comrade, but the Huntress does as the Kid says since there is no way they'll be able to survive a blast from the carrier, and acknowledges that they need to come up with a better plan to save him. As things are, they are of no help to him. Some police cars drive by and Wildcat suggests alerting them to the Gotham Stadium, but Huntress is against the idea of sending them there since they weren't useful against the Strike Force earlier. Wildcat then settles for sending 'some help' of his own.

After buzzing the Justice Society heroes, Wildcat gets no response from his comrades. Jay Garrick is giving Alan Scott a tour of his lab in Keystone City, Kent Nelson is dealing with a threat in his Tower in Salem, Power Girl is fighting against her space ship in another corner of Gotham, Carter and Shiera Hall are digging up artefacts in the Nile Valley, Charles McNider is tending to vehicle accident victims, and Clark Kent is responding to flying saucers in Metropolis. Huntress sees no point in continuing to try to reach the Justice Society heroes if they're not responding, but Wildcat is disturbed by something else at the moment: the fact that Huntress knows her way around the Justice Society headquarters and even knows how to use the computer equipment. He's additionally disturbed by the fact she won't go near the police. At that moment, the Huntress is forced to reveal herself as Helena Wayne, the daughter of Bruce Wayne and Selina Kyle. 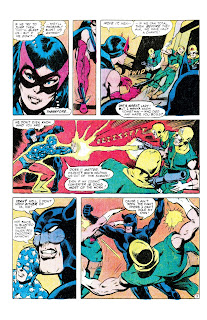 Wildcat is shocked to learn Batman has a child, but is at least able to understand why she knows her way around a place like an official JSA member. Helena goes on to explain she became the Huntress to avenge her mother's death, and that the reason she can't be near the police is because her father is police commissioner. If he found out she's been occupying his place as Gotham's newest crime fighter, the shock could potentially kill him in addition to the more recent Wayne family tragedy.

At Gotham Stadium, the Kid has been restrained by the Strike Force and its leader, Number One, reveals himself as Arthur Pemberton, Sylvester's very own nephew. He further admits that since his uncle vanished decades ago, he inherited the Pemberton fortune and used that money to refurbish the stadium and fund the technology that he uses to commit crimes with the Strike Force. This naturally upsets the Kid as he did not 'walk out' on his own inheritance as his nephew suggests, but was instead robbed of it as a consequence of his heroic lifestyle.

Huntress and Wildcat return to Gotham Stadium only to find that the Strike Force had already left and they took the Kid with them. Huntress discovers astroturf on the stadium grounds, which Wildcat initially dismisses as insignificant. Huntress then points out that the rest of the grass on the stadium is real and that the astroturf was brought to the stadium from elsewhere. Since the stadium hadn't been opened to the public, Huntress believes the Strike Force accidentally brought it with them when they arrived earlier. Huntress and Wildcat then use this bit of information to locate the Strike Force's other hideout. Ted Grant calls an old friend at a newspaper to find out where astroturf can be found in Gotham. His friend names only one place where it could be found, which is a place outside of Gotham called the Meadowlands.

Huntress and Wildcat arrive at the Strike Force's second hideout at the Meadowlands and catch them completely off guard. Together, they attack Arthur Pemberton's men while they are unarmed and release the unconscious Star-Spangled Kid from his restraints. Huntress uses a gas pellet from her utility belt to get him to wake up, and together all three heroes take out what's left of the Strike Force. Huntress almost takes out the leader of the group, but is prevented from doing so by the Kid who wants to pummel his own nephew for using his family fortune for criminal purposes. Following this endeavour, the Kid decides to temporarily leave the Justice Society in order to get his life sorted out and reclaim his estate. This leaves his seat available to the Huntress.

Review: Whereas issue #70 only provided a sample of who Helena Wayne is as a heroine, issue #71 further elaborates on what we know of the heroine. In the last issue, it was established that Helena is a team player and that becomes a central theme in this story. From start to finish, Helena Wayne is quick to assess the situation and is very quick to come up with a plan for taking on her opponents. Whenever the situation changes out of her favour, she always finds a way to shift power back to herself and improvise as needed.

Another thing Levitz showcases with Helena in this issue is her leadership skills. Despite not being an official member of the Justice Society at this point in time, Helena still demonstrates that she is capable of leading other people and doesn't wait to take orders. As stated earlier, she's very quick to assess a situation, come up with a plan for winning, and she instructs her teammates on the course of action to take without being prompted. Even when she's working one-on-one with another Justice Society teammate, Helena at no point surrenders her leadership hat and is always seen taking control of every situation. 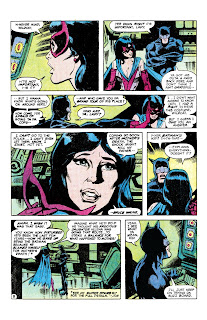 On these accounts, Levitz does really well at presenting Helena as a heroine with her own agency and not as the 'strong female character' stereotype. She's skilled at what she does, but she's not a female embodiment of toxic masculinity like her father tends to be characterised. Levitz allows Helena to exist as an individual without sacrificing her femininity along the way, which is a huge part of what made the original incarnation of this character fun to read about.

Another development that's interesting throughout this issue is how Helena Wayne gets along with a guy like Ted Grant who has very outdated views on women. Whereas Power Girl always takes offence at Ted's patronising behaviour and constantly clashes with his inability to think of her as an equal, Ted surprisingly doesn't behave the same way around Helena. Whether or not that's linked to the fact that Helena doesn't challenge Ted's ideas of femininity the way Power Girl does isn't really addressed in this story. The only time we ever see Helena address his sexist behaviour is when she asks him to call her by her actual name of Helena instead of 'princess' like he initially did soon after learning her identity. Beyond that, the issue never really comes up.

On the front of story, Levitz is very straight to the point here. The group of villains appeared, their leader was revealed to be the nephew of a Justice Society member, and that latter development led to the departure of that one Justice Society hero in order to get his life back in order. Basically the whole point of this story was to both help Sylvester find his place in a time period that isn't his own, and also open Justice Society membership to the Huntress, which happens in the next issue.

A few things that stood out to me with this story arc was Doctor Fate's portion of it, which still felt out of place in juxtaposition with the rest of the narrative. Whereas the other Justice Society heroes were presented as carrying on with their civilian lives, Doctor Fate's story arc actually felt like it was leading to a future storyline. Additionally, it is never really made clear if the threat Kent Nelson went off to fight was the one inside the Tower, or some other threat that he felt was more dangerous than the one inside the Tower. Levitz is rather ambiguous about that. On that note, it also didn't make sense to me that Kent just left his wife in the presence of a potentially dangerous threat instead of taking her out of the Tower. What's especially alarming about that is the fact that Kent didn't even have his helmet on when he decided to leave his wife in the Tower. So it's not like the wife can actually blame Kent's strange behaviour on Nabu.

Another insignificant detail that stood out to me about this issue was on the page where both Huntress and Wildcat were trying to contact the other Justice Society heroes back to headquarters. On this one page, Huntress says that out of all the buzzers buzzing, only hers and Wildcat's buzzers are the ones 'responding.' It was probably a brain fart on Levitz' part since the Huntress was being slated to become an official Justice Society member after this issue, but I nonetheless found myself asking 'at what point did Huntress acquire a buzzer if she hasn't officially joined the team yet?' Did she happen to grab the one that belonged to her father? If so, wouldn't he have noticed? Additionally How come Wildcat was disturbed by the fact that she knew her way around JSA headquarters (even knew how to use the computer equipment), but not about her mentioning having a buzzer? It is, of course, an insignificant detail that most people would probably not notice, but it still stood out to me all the same.

Aside from those two 'suck me out of the story' moments, the rest of the issue is actually pretty solid and the characterisations for each of the characters is well handled by Levitz. It's also a great story to pick up for seeing how Helena Wayne gained membership into the Justice Society pre-Crisis.