The Best of the Huntress: Wonder Woman #297 Review 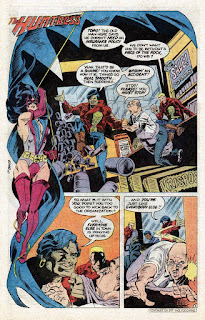 Summary: There is a new threat in Gotham, and for the first time since the Huntress took over protecting the city, an innocent civilian does not feel safe without Batman. As Charley Bullock steps up to protect a convenience store owner from a thug named Toro, Charley starts to think about whether or not Gotham has remained safe ever since the Batman died in 1979. Is the presence of the Huntress alone enough to protect Gotham, or is it time for a new hero to step up and continue what the Batman started?

At the district attorney's office, Commissioner O'Hara introduces Harry Sims to his new partner, who also happens to be his girlfriend, Helena Wayne. Helena is very enthusiastic to be working alongside her boyfriend for once to achieve the common goal of making Gotham safe from crime. She also feels this new endeavour will help enrich their relationship. Harry, however, does not share her sentiments. He already struggles to accept her double life as the Huntress, and working alongside her will just remind him of what she actually does at night. This attitude upsets Helena and she leaves to blow off some steam the only way she knows how: as the Huntress combatting crime in the city.

The Huntress tracks down the criminal known as Toro from earlier to Gotham's Chinatown, and just as she is about to make her surprise entrance, another costumed hero beats her to it when Blackwing decides to take the stand against the thug. 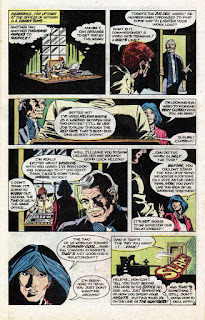 Review: In an era of DC Comics where it is becoming increasingly frustrating to enjoy comics with the Huntress, the Justice Society, and Earth-2 in general, it is always cathartic revisiting the stories that were published with the pre-Crisis original. In an era where corporate DC is obsessed with Batman to a pervasive and often exasperating degree, it is equally refreshing to revisit a story from a time when writers and editors alike understood that the legacy of Batman on Earth-2 was never about the man in the bat suit, but about the people he inspired to continue his work long after he died. Writer Joey Cavalieri certainly delivered on that premise by exploring what that legacy meant from the perspective of a different character other than Bruce's own daughter.

From the moment Helena Wayne was introduced in 1977, the entire legacy of Batman on Earth-2 fell almost exclusively on Helena's shoulders, even with the existence of Dick Grayson who was at the time still the Golden Age Robin. In the second instalment of Joey Cavalieri's first Huntress story, Cavalieri introduces a new character to become a part of that legacy, in this case, a character who was--up until this point--Helena's associate at her law firm.

In stark contrast with the Earth-2 Batman narrative we have in 2016, this is the 'developing of the Earth-2 Batman legacy' done right. Whereas modern DC has preoccupied itself too much with the technicality having a new man in a bat suit at the front and centre of every Earth-2 story and at Helena's expense, Cavalieri's story does no such thing. Helena continues to be the hero of her own story, but new characters are gradually added to redefine the legacy of the Golden Age Batman alongside with her. And instead of creating a new Earth-2 Batman, Cavalieri simply took an established POC character in Helena's cast--in this case Charles Bullock--and simply had him develop a new identity inspired by Batman. What does it say about today's DC when the publisher was more forwards thinking in 1982 than in the year 2016? It's pretty telling and not in a good way.

While Cavalieri didn't have the page space to show Charley's transformation into his new identity as Blackwing, he nonetheless piqued my interest as a reader. What skills does Charley secretly possess that he will showcase as Blackwing? What new skills will he learn as he--like Helena--decides to pick up where the Batman left off? How will Helena respond to the presence of a new hero in Gotham inspired by her father? How will she feel to learn that the newcomer is none other than her associate at her law firm? How will this change their professional relationship upon learning each other's secret identities? Will Helena gain a new ally in her fight against crime, or will she have someone to mentor? 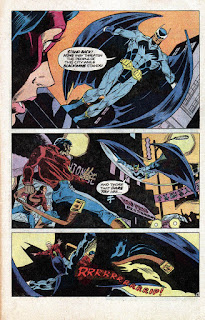 Another development Cavalieri puts into the spotlight of his first story is Helena's complicated relationship with her boyfriend, Harry Sims. One thing Cavalieri does really well here is explore how much this relationship means to Helena, even though she has every reason in the world to leave a guy who can't see past her Huntress identity for the person that she is. Helena doesn't want to give up on her relationship and wants to make it work. Her boyfriend, however, is now making petty excuses and makes it known that he feels uncomfortable working alongside her, knowing what she does as the Huntress.

Helena is rightfully upset here because, for once, she is offering to do things the way that he wants and he still won't budge. She therefore comes to the conclusion that it's her that he has a problem with and not the Huntress. The way Cavalieri depicts this scene between Harry and Helena is pretty dramatic but not in a forced or exaggerated way. The conflict between Harry and Helena regarding her secret lifestyle has been an ongoing roadblock for them ever since Harry first became aware of it, and one that's continuing to spiral downward. Harry continues to cowardly avoid the issue and Helena is running out of patience with him. More than anything, we're seeing the continued disintegration of Helena's relationship than we're seeing any improvements, and that's a development Cavalieri will be exploring in his future stories.

On the whole, Cavalieri continues to have a great start with the Earth-2 Huntress for his first story arc. He not only continued many of the developments from the previous Paul Levitz run--resulting in a smooth transition from the previous writer--but he also stayed on track with Earth-2's implicit mission statement of building a diverse Golden Age universe with a diverse cast of legacy heroes. The only issue that I continue to find with Cavalieri's first story arc is stereotypical portrayal of POC as criminals, but at least this problematic depiction is better balanced out with the inclusion of a POC superhero. Whether or not he is successful in debuting this new POC hero will be the discussion of the next post.