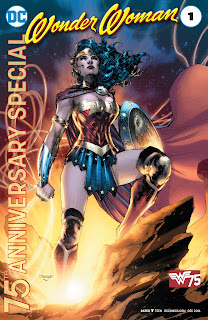 Review: It's been a week now since the US presidential election, and its' been a very surreal past couple of days to say the least, and not in the best sense. If there had been a Twilight Zone episode about the five stages of national grief, this would be it. But alas, this isn't a Twilight Zone episode. This is real life unfolding in real time.

Everything that's been happening in the United States these past couple of days has felt like something I would've read in a Justice Society comic in the 1940s where Per Degaton travelled back in time, changed one crucial detail of the past that significantly altered the present. Instead of time progressing, time started moving backwards to more primitive eras and less progressive cultures. That's exactly what this Trump victory has felt like to me. A case of a comic book villain cheating his way to success and at thousands of people's expense. Only problem is this isn't a story happening in a comic book page. This is all happening in real life. I never thought I'd greet my 30th year of life in a time where people all over the world (not just in the United States) failed to learn from history.

Last time someone said they were going to make their country "great again" and used fear tactics to win the people's favour, that person turned out to be a dangerous demagogue who rounded up people he didn't like and mass exterminated them in internment camps. That person was Adolf Hitler and the event in question became known as the Holocaust. Neither one was fondly remembered by history. This is history from the first half of the 20th century, and we--all over the world (or more famously, the United Kingdom and United States)--have failed to learn from that history. We have therefore condemned ourselves to stupidly repeat what we didn't learn the first time in the earlier half of the 21st century. Imagine that. There could not have been a more relevant time for the existence of superhero comics, movies, and television than now. 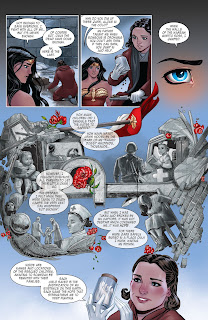 Given the violent spectacle this election season turned out to be (and this whole year for that matter), it only made sense that I'd bury myself in something that actually makes me happy. A narrative that actually fills me with hope and reminds me of the better things in life. An 80 page comic filled with short stories and artwork about the first female superhero who actively fought against the Nazis and other agents of evil in 1941. Considering that our first and highly qualified female president of the United States lost the electoral vote to the most unqualified male candidate ever to run for office with a history of sexual violence, misogyny, racism, tax evasion, and racketeering, the existence of Wonder Woman could not be more important 75 years after her creation. Her existence within the current political climate continues to show how far we have yet to go as a whole community.

There's a lot to enjoy about the Wonder Woman 75th Anniversary Special, including original cover art from comic book legend Brian Bolland. There are even short story tie-ins to upcoming Wonder Woman graphic novels Wonder Woman: The True Amazon by Jill Thompson and Legend of Wonder Woman Vol. 2 by Renae De Liz and Ray Dillon. There is even an all-text interview between Lois Lane and Wonder Woman written by the fabulous Greg Rucka, and a Wonder Woman 75th Anniversary song by new rising talent Marguerite Bennett and artist Marguerite Sauvage. We even get a beautifully illustrated two-page piece by the equally talented Liam Sharp who is one of the artists on the Rebirth Wonder Woman title also written by Greg Rucka, and there's even a cute story by Brendan Fletcher where Diana seeks justice for animals against human cruelty. Amongst all of these fun and exciting stories found in this 75th Anniversary special, however, the one that resonated with me with the strongest is the preview short story for Legend of Wonder Woman Vol. 2 by Renae De Liz and Ray Dillon.

I know I was bound to love De Liz and Dillon's short story in this special considering I'm a huge fan of their work on Legend of Wonder Woman Vol. 1. But this isn't so much a case of bias as it is a case of 'this is the Wonder Woman story I need right now,' especially within the political context we're in right now. Staying true to the form of the first volume of Legend of Wonder Woman, De Liz and Dillon continue to reinterpret the Golden Age stories through a modern lens. There's a lot that calls back to the original style of writing that the Wonder Woman comics were published with during the Golden Age, but De Liz and Dillon keep the story modern. They even do their own take on Wonder Woman #3 from 1941, which is the story that centred on the Baroness Von Gunther as the main villain and saw her reform at the end of the comic when Wonder Woman reunited her with her daughter, Gerta, in order to liberate her from the Nazis' control of her.

Von Gunther is the main antagonist of De Liz and Dillon's short story as well, and like the original story told in Wonder Woman #3, the Baroness also reunites with her daughter and chooses to reform. My favourite part in this story, however, isn't so much the callbacks to the Golden Age (though I did enjoy those as well), but the homage that De Liz and Dillon paid to one of real life's superheroes, Irena Sendler.

Irena Sendler was a real nurse living in Poland in the 1940s who smuggled over 2000 Jewish children out of the Warsaw ghetto to safety during Nazi occupation of Europe. She established a very elaborate network that allowed her to smuggle young Jewish children (including infants) to safety, and did everything within her power to keep them safe from harm. Among the tactics used included smuggling them out via ambulance, falsifying documents, placing the children with non-Jewish families, and keeping their names and locations written on pieces of tissue paper that she placed in jars and later buried. She was eventually captured by the Gestapo, tortured, and sentenced to death, but Irena survived. After the war, Irena Sendler tried to help the children reunite with any surviving family members using names she placed in the jars.

De Liz and Dillon reference all of those major events in Irena Sendler's life in their story, but with a major twist: instead of Irena becoming inspired by Wonder Woman in this fictionalised version of her life, it is she who inspires Wonder Woman. This is undoubtedly a very touching moment in the story that celebrated not only the accomplishments of a real life woman who was superhero to over 2000 Jewish children, but also the importance of acknowledging those real life heroes. Because many of us tend to celebrate and get inspired by the costumed types we read about in fictional universes like Wonder Woman, we often tend to forget to honour our real life heroes who have also sacrificed to save thousands of lives. Most of these people don't tend to wear uniforms, but their work is just as important because of the difference they make in people's lives and the difference they continue to make in people's lives long after they die. 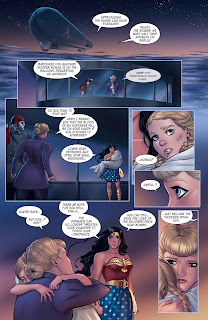 It's very clever the way De Liz and Dillon juxtaposed a real life hero with a fictional one in ways that don't compare or even discredit one or the other. In many cases, Wonder Woman is the inspiration. She is the example of the type of hero we can all aspire to be. Irena Sendler was the real life hero that upheld the ideal of Wonder Woman before the character was even created. It was also an amazing way to remind readers of the real life heroes that exist in our lifetimes and to acknowledge their work.

Another real life hero that was referenced in this anniversary special was Joan of Arc in the Rafael Albuquerque and Rafael Scavone story. Joan of Arc was a real life teenage war hero, and the only woman who fought in the French army against English domination in the 15th century during Hundred Years' War. Though Joan won many victories for France that eventually led to the coronation of French King Charles VII, she was eventually captured, tried, and executed as a witch at 19 years of age, even though she identified as Catholic. She was later iconised as a saint and became a hero to many people centuries later.

Given the political climate we're in right now, we are definitely going to need real life heroes to keep fighting for our own rights as well as the rights of others. To keep fighting to preserve the progress we've made and continue to make progress for those who still lack visibility, power, and voice in mainstream society. It's unlikely any of us will be developing any special powers or putting on colourful costumes to fight the good fight. It's even less likely any of us will be forming a real life Justice Society team to combat every injustice the Trump administration will surely bring against vulnerable citizens in America, especially if he appoints a well known white supremacist, misogynist, and anti-semite like Stephen Bannon as his chief strategist. We'll probably never see Wonder Woman surface in real life to help avert the world crisis that will surely come out of both Brexit and a Trump victory. But we will definitely need another real life Irena Sendler to protect the vulnerable from violence, and we will need another real life Joan of Arc to actively fight against an oppressive force, even if it is just joining a human rights organisation, a protest, or even just writing to your state representative and senator.

While many of us are rightfully angry about the political fallout of this year, we also need to peacefully provide opposition to the forces that seek to harm us. Not just for ourselves, but also for other vulnerable life (such as plants and animals), and the overall wellbeing of our planet. It is, after all, the only one we have. We are all in this together and we need to overcome every obstacle together, even if we no longer have the federal government on our side. That's what I got out of reading the Wonder Woman 75th Anniversary Special. This message is even the foundation of the superhero genre as a whole. There is no excusing bigotry and ignorance, but we can better educate ourselves and the people around us so that we don't keep repeating the darker episodes of our history. Through education alone, we attack the source of the problems that divide us, not the people who do the dividing.