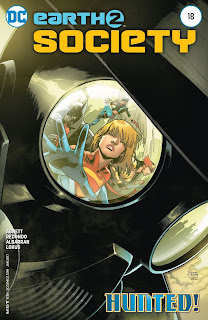 Summary: In the ghost world of Old Metropolis, Helena Wayne and her two companions are going for a stroll, trying to figure out where they are. Helena is upset that they're in limbo and doesn't believe there is anyone else around. That is until they are attacked by an army of Sandmen, which she and her companions effortlessly defeat.

On the other side of Metropolis, Val-Zod theorises that reality has been completely rebooted and that they've all been changed in subtle ways. He also thinks that the world does exist but is "out of phase" and is "waiting to catch up." Fury decides to test this theory by punching through an invisible wall, revealing a fully realised interior. This attracts the attention of the Sandmen who are still acting the heroes like antibodies attacking a virus that invaded a host body.

The heroes succeed in keeping the Sandmen at bay, but their surroundings go pitch black before revealing a fully realised living Metropolis with a modern retro aesthetic. There to greet the heroes is Henry Heywood III, the third Commander Steel.

Review: Earth-2: Society has been a very frustrating book for me to enjoy and review objectively since issue #1. While Dan Abnett has been making the most of what has been a very troubling title, I've rarely felt content with the overall direction of the story and characters. Issue #18 is legitimately the first time I've actually felt excited for anything happening in this title. 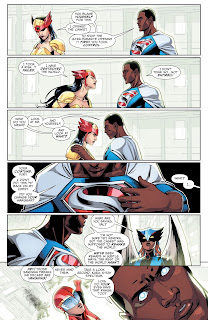 It may have helped that recent interviews with Dan Abnett have helped to clarify the direction of his run ever since he took over the title, especially considering how both Earth-2: World's End and the first story arc of Earth-2: Society left so many of us feeling angry and disillusioned with the needless wholesale destruction of what used to be a promising franchise. It was a very vomit-inducing flavour that was hard for any of us to shake off. But once Dan Abnett put everything into perspective, it was easier for me to come onto this with a more clear understanding of his goals for this title.

For the most part, I like where the story itself is heading. I like that Abnett brought back the original Earth with a modern retro aesthetic, which is a nice homage to the original pre-Crisis Earth-2 and DC's Golden Age continuity. It also looked like it took inspiration from the second season of The Flash television show, which I think also helps sell the new direction and could even potentially attract the Flash TV audience.

I really loved Bruno Redondo's illustrations throughout this arc, especially his rendition of the new Metropolis, which was the most gorgeous two pages I have ever seen in a comic. I could literally take these two pages, blow them up, and frame them on my wall. I loved everything about it from the sun-lit sky to the skyscrapers with the digital holographic screens, to the retro futuristic-looking cars, and even the zeppelin in the sky. I loved the 1940s inspired fashion and the Clark Kent look-alike behind the guy walking with a Daily Planet newspaper with earpods in his ears.

I really have to mention the inker Juan Albarran and colourist Rex Lokus who helped to sell both Abnett's script and Redondo's pencils. I loved the crispy clean digital contours of Albarran to help convey the image of a 'brand new' Metropolis. Lokus really sells it on the "Golden Age" feel with his use of pastel colours and the prominent use of gold juxtaposed with cooler colours like blue. It really does help to create that aesthetic of "hope and wonder" that Abnett was talking about in his first Newsarama interview, and it has me feeling really excited for the next issue.

The only problems I can identify with this new story arc are the characters themselves and especially the lack of an actual Justice Society, which is really Earth-2's main selling point. This is the one area where I feel the Rebirth Justice Society is going to put this new Earth-2 at a major disadvantage. Side-tracking for a bit here, I'm really confused about where DC is going with both Earth-2 and the Justice Society seemingly moving in opposite directions of each other, which in my opinion, doesn't make sense. Most DC fans know that Earth-2 is supposed to be the Justice Society Earth. So why is DC bringing the Justice Society back to Prime Earth, effectively defeating the purpose of an Earth-2 reboot and equally undermining Dan Abnett's goals with this book? 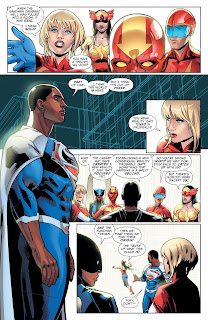 If DC hired Abnett to set Earth-2 back on track via course correction, they should've allowed him to do that and allow him bring back the more classic Justice Society we all know and love on this new Earth-2. In DC deciding to put the proper Justice Society on the same Earth as the Justice League (which that idea is now starting to look stupid in face of this new direction), DC is now relying on a Batman and Superman family-heavy cast to help sell this book. This is the other direction that I feel is not going to work in favour of this new Earth-2, even though characters like Helena Wayne and Kara Zor-L are fan favourite characters with passionate fanbases.

There are multiple reasons for why I feel this way, but the main reason for me is the fact that these two families were so completely mishandled by the last editorial office in the last four years, we literally don't have Batman and Superman families that actually feel authentic like in the pre-Crisis Earth-2 continuity. Bruce Wayne, Selina Kyle, Clark Kent, and Lois Lane were all killed off in the first issue of James Robinson's Earth-2 series before any of us had the chance to know them. Keeping them alive was especially important to building the narratives of both Helena Wayne and Kara Zor-L in the current continuity, who are still the daughter and cousin of Batman and Superman respectively. It would've especially helped to add new characters to these two families in ways that actually felt organic as opposed to forcefully shoe-horning characters like Val-Zod and Dick Grayson into taking up the mantles of Clark and Bruce in ways that led to the male usurpation of both Kara and Helena's stories.

The Batman narrative in particular has been the most problematic as it suffered from both years of bad storytelling and institutional sexism. These two problems in combination resulted in the complete marginalisation of Helena Wayne from her own story as her own father's successor. It also resulted in the complete ruination of characters like Thomas Wayne and Dick Grayson in DC's ill-conceived attempts at having a new "Batman" of sorts. Not only does having a new Batman on Earth-2 undermine Helena Wayne's existence, but turning both Dick and Thomas into usurpers in bat suits especially did neither character any favours.

Thomas Wayne got turned into a mobster and drug addict who survived the shooting at Crime Alley and abandoned his own son for a life of revenge, which was complete character assassination for that character. Dick Grayson had his entire history with the Wayne family retconned out of existence, but DC still shoe-horned him into a bat suit complete with Bruce's personality just so that he could function as a new marketing tool for this book. His son is now also being teased as becoming the new Robin to his Batman, which is now doubling down on the very institutional sexism fans have been criticising DC for these past five years. This problematic rebooting of Dick's character not only made him the most controversial character on this book, but his continued presence in this book with the baggage he's carrying is going to keep this book from completely regaining the audience the original Earth-2 series started off with. 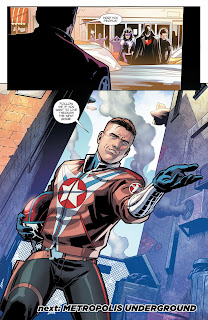 While on the whole I feel Abnett is moving in the right direction on the narrative front, I also feel that he is only meeting his goal of restoring Earth-2 to its former glory halfway. Restoring the original Earth was definitely needed to get the story back on track, and Abnett did accomplish that with this story arc. The characters, however, still need complete reboots themselves in order to divorce them from the baggage of the last era and give this new Earth-2 the completely fresh start that it desperately needs. Restoring the Justice Society is a definite must for Earth-2's success because, again, they are the main selling point of Earth-2. At best, we got one classic Justice Society character back in this months' issue--the post-Crisis Henry Heywood III--but we don't know if we'll actually see the complete restoration of the Justice Society on this new Earth-2, especially with the classic team set to resurface on Prime Earth.

With the characters that we do have on the main cast, we definitely need Helena Wayne back in the lead role of her own story. We need the Helena Wayne who is a lawyer by day and the Huntress at night to get her back on track with the character most of us know and love. We need the Dick Grayson who actually existed as her father's ward in order to re-authenticate his familial relationship with Helena and his place in the Earth-2 Batman legacy. He also doesn't need to be Batman to be a part of that legacy. We need Power Girl back in her classic costume to divorce her from her "alternate Supergirl" image and restore the character who wanted to stand out on her own, not as a "carbon copy" of her cousin. We need Lyta Trevor back as Fury because she best represents the legacy of the Golden Age Wonder Woman and Steve Trevor, not the daughter of Steppenwolf.

We need Jay Garrick back as the Flash with the silver helmet and his wife Joan Williams. We need Alan Scott as the Green Lantern who is also the father of Jenny-Lynn Hayden and Todd Rice (Jade and Obsidian respectively). We need many more classic Justice Society characters like Kent Nelson as Doctor Fate to return in order for this Earth-2 to feel like a modern adaptation of the pre-Crisis original. As we speak, the only characters in the current cast with the least amount of baggage are Val-Zod and Kendra because they are relatively new characters.

It's too soon to say at this stage whether this revamp will be a success, but I do know that there is still a lot more work to be done where the Earth-2 characters are concerned and how they are going to fit into their new revamped world. If Abnett completely turns everything around for them by the end of this arc, that could mean a world of difference for the characters in their longterm success.