Was Earth-2: Society Supposed to be the Rebirth of Earth-2 Proper? If So, Where Did it All Go Wrong? 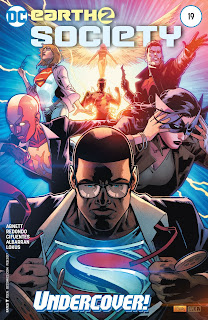 I've been thinking a lot about this lately, and especially Dan Abnett's confirmation that he was brought onto the Earth-2: Society title with the goal of saving the comic. Was Daniel H. Wilson originally supposed to revive the original Earth during his run, but failed to deliver on that promise? Was DC recognising their failure with Earth-2 the reason the proper Justice Society is being "rebirthed" on Prime Earth?

As I detailed in my last post, I attribute the death of the franchise to three main contributing factors: (1) The loss of meaningful history and legacy we associate with Earth-2. (2) The decision to turn Earth-2 into a toxic playground for bad storylines ala Ultimate Marvel. (3) The annoying tendency to centre the comic on alternate versions of Batman and Superman instead of the Justice Society characters--Earth-2's main selling point. That was just with the original Earth-2 series alone. If Earth-2: Society was supposed to be a fresh start, where did DC go wrong? The answer, in my opinion, lied with the people they put in charge.

I would argue the New 52 Earth-2 was doomed to fail the moment the property was put under the supervision of Eddie Berganza, who isn't known for his glowing reputation as a competent editor. It was Eddie Berganza who saw the launch of the Huntress miniseries in 2011, which reintroduced Helena Wayne back into the mainstream continuity, along with Earth-2. This is the same Eddie Berganza who thought it was a great idea to retcon the fan favourite Helena Bertinelli Huntress has having been Helena Wayne the whole time, effectively turning another fan favourite character like Helena Wayne into a highly controversial character. 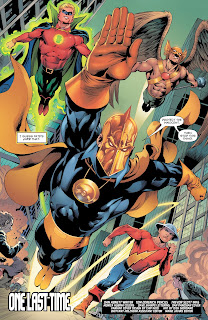 The common denominator in this recurring pattern of bad luck for Earth-2 was the lack of an actual Justice Society fan amongst DC's staff who was actually interested in building a strong Justice Society franchise. The two people who were--in this case, James Robinson and Paul Levitz--didn't exactly have the power to influence the overall directions of the books they were in charge of. They were either eventually driven off the title they were working on due to conflicts with editorial (Robinson), or they simply didn't challenge bad editorial directions, even when they knew these editorial directions would be damaging to the franchise (Levitz).

Without that someone with a genuine love for the Justice Society characters overseeing any of these projects at the editorial level, it was only natural that Earth-2: Society would fail to revitalise the series in any meaningful way from the unnecessary damage that came before. By the time DC got around to course-correcting this property by literally replacing everyone involved with Earth-2--editors and creators alike--it was already too late to make a difference. The damage was already complete.

Had DC recognised from the moment James Robinson was driven off the original title that something was wrong, and that the Earth-2 comic was no longer moving in the right direction, a lot of long-term damage could've been easily prevented. Had DC recognised that Michael Cotton's idea of a story that's "dark, mean, and I don't like happy endings' as a bad fit for a Justice Society comic, new staff could've been brought on board a lot sooner to once again prevent a lot of unnecessary damage. Had someone like Geoff Johns been more involved in launching a new Earth-2 comic for a modern DC audience from the start, that would've made a world of difference in the kind of Earth-2 we would've gotten for the modern DC continuity. 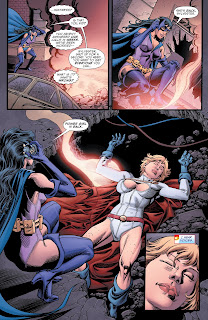 If Johns had been put in charge of executing the event leading to Convergence last year, we probably could've gotten our first Earth-2 and Prime Earth crossover event. It would've definitely made the event feel more worthwhile if it meant seeing each of these characters interact with their past selves to battle a new threat. It could've even lead to a genuine rebirth of the DC Universe if DC was already looking to move away from the New 52 era by this point. We probably could've even gotten DC Universe Rebirth a year earlier than we actually did, and Earth-2 could've simply been relaunched as Justice Society of America.

In a better world, this is what would've happened. But alas, it didn't. The only thing DC can do now is learn from the bad choices they made with the Justice Society property in the form of Earth-2, and not replicate these same bad decisions in the future. So far, it looks like DC did learn from their mistakes with Earth-2 because we're now getting back the more classic Justice Society with Rebirth, but on Prime Earth instead of Earth-2. The question now is who's going to be put in charge of it and which characters are going to be brought back with the Rebirth Justice Society?

In my opinion, DC should keep Jim Chadwick as the editor and Dan Abnett and Bruno Redondo as the creative team. It's doubtful Geoff Johns will be writing the title since his plate will be full between fulfilling his duties as DC President and as the head of DC Films, so Abnett would be the next best choice writer. As for the Justice Society characters themselves? Literally bring back everyone, and I do mean, everyone. From the original founding members of the Golden Age to the pre-Crisis versions of Huntress, Power Girl, and Fury to take the place of the Golden Age Trinity. DC should also bring back post-Crisis additions like Kendra Muñoz-Saunders and Sonia Sato, and create Prime Earth versions of New 52 additions like Val-Zod and Queen Marella so that these characters don't fade out of relevance with the failure of Earth-2. Literally give everyone a fresh start and we could potentially have a more successful Justice Society Rebirth title, and not another creative and commercial flop like Earth-2: Society.

The point is, for any comic to be successful, it absolutely DOES matter that the right people get put in charge. If you have editors and creators who love the Justice Society characters and want to tell meaningful stories with them, you'll get a run like Geoff Johns' critically acclaimed Justice Society of America. Put editors who don't love or respect the characters, and--worse yet--they hire writers who have zero understanding of the Justice Society characters or interest in DC's Golden Age lore, and you will get another botched comic like Earth-2: Society.
Posted by Diane Darcy at 11:51