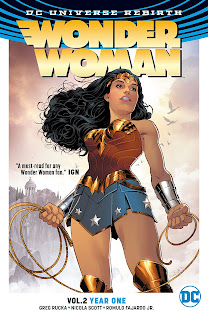 Description: A part of DC Rebirth!

New York Times best-selling writer Greg Rucka continues his return to WONDER WOMAN! The team of Rucka and artist Nicola Scott weave the definitive and shocking tale of Diana's first year as Earth's protector. Paradise has been breached, Ares stirs, and the Amazons must answer with a champion of their own...one who is willing to sacrifice her home amongst her sisters to save a world she has never seen. Wonder Woman's journey begins in this epic origin story!

Woo Woo! We're officially one week away now from Wonder Woman's cinematic debut, which means it's time to recommend another Wonder Woman comic, this time from the mainstream DC Universe! The good news is now is a good time to jump onboard. With the Rebirth initiative being only a year old, there are plenty of opportunities for new readers to check out new comics currently published by DC Comics without feeling intimidated by past DC continuity.

As has been consistently stated by DC president and CCO, Geoff Johns, Rebirth honours DC's past continuity while taking each of these properties to the future. It invites both new and older DC fans to the fold, and takes these characters into new and interesting directions while never straying from the original ideas and concepts that made these characters resonate with people for generations. Wonder Woman Rebirth lives up to all of those promises and more.

Just like with Legend of Wonder Woman, we once again see Diana's life on Themyscira in the first act, her first meeting with Steve Trevor and subsequent journey to man's world in the second act, and her first outing as Wonder Woman in the third act. Though Wonder Woman: Year One is three chapters shorter than Legend of Wonder Woman and we're not presented with a highly detailed recount of Amazonian history nor Diana's childhood on Themyscira, the story is still pretty self-contained and easy to follow. This makes Wonder Woman: Year One an ideal jumping on point for new readers who want to get acquainted with Wonder Woman in the mainstream DC universe.

In addition to reinterpreting Princess Diana's humble beginnings as the iconic DC superheroine, Wonder Woman: Year One also reexamines Diana's most important relationships, namely with Steve Trevor and Etta Candy, who have both been staple to her mythos ever since the Golden Age era of comics. Though Steve is relatively unchanged from his original Golden Age incarnation and every incarnation since then, the most significant change has been made to Etta Candy who was also reimagined as an African-American woman in 2012.

Aside from now existing as a woman of colour, I would say the one thing that stands out most about this newer incarnation of Etta is that she combines aspects of all of her previous incarnations, which was not previously seen. In contrast with the post-Crisis incarnation in particular who was mostly a continuation of the Silver Age version, the new Etta Candy reclaims some of her Golden Age roots. The most obvious example of this is that she is once again a normal looking woman of a different body size and looks a lot less like a supermodel. Also similar to the Golden Age incarnation is the bold confidence and compassion that the new Etta Candy embodies, which allows her to connect with Diana right away. The aspects of her character that are distinctly borrowed from the Silver Age and modern incarnations are her connection to the US military and Steve Trevor in particular, which are also established in this volume.

Another character who gets reintroduced in this volume is Barbara Ann Minerva, who later becomes one of Diana's iconic supervillains as the Cheetah. Though not the original Golden Age Cheetah (Priscilla Rich), this version of the iconic supervillain originated in the post-Crisis continuity (1986-2011) in 1987, which makes her a relatively new character. In her original incarnation, Barbara Ann Minerva was initially depicted as an ambitious but self-centred British archaeologist, who was also emotionally unstable. In Wonder Woman: Year One, writer Greg Rucka preserves the character's original roots as a British archaeologist, but reinvents her as a more complex and nuanced character.

In contrast with the past incarnation, this newer take on Barbara Ann Minerva establishes her as one of Diana's first friends upon her arrival to Man's World from Themyscira, which makes Barbara Ann's later transformation into the more villainous Cheetah that much more personal to Diana. There is even an entire chapter in this volume devoted to exploring Barbara Ann's childhood in England, her obsession with the Amazons as a young child, which later factored into her career choice of archaeology. She specifically got into archaeology in order to find real, tangible proof of the Amazons' existence beyond the pages of ancient Greek mythology.

Through Barbara's earlier archaeological expeditions, We even learn some new things about the Amazons that Diana may not be aware of, such as the existence of a "twelfth queen" of the Amazons. This detail is especially intriguing because Diana's mother, Queen Hippolyta, is the tenth known and current queen of the Amazons--a detail that is also established in this same volume. If two more Amazonian queens succeeded Hippolyta, this plants a seed for a future story arc that could dive deeper into the history of the Amazons, and especially reveal the fates of the other two queens who supposedly succeeded Hippolyta. Maybe the artefact Dr. Minerva found is not from the past, but from the future? Maybe there are some multiversal shenanigans involved? Either way, it is the kind of easter egg that would keep you interested in reading the future instalments.

On the subject of the Amazons, undoubtedly, my favourite chapters in this volume are the ones that depict Diana's life on Themyscira. A big part of that has to do with artist Nicola Scott's very detailed illustration of the island's Greek-inspired landscapes, architecture, and fashion. I especially love the way Scott draws Queen Hippolyta in those chapters because she gives her a very Mediterranean appearance. It's a very appropriate look for that character that also helps to distinguish her from her daughter, Diana, whom Scott draws brilliantly as well.

I additionally love the way Scott draws Phillippus who has an African-inspired look and her body language very much presents her as having the heart of a warrior: passionate and loyal. I also love Scott's rendition of Castalia--one of the priestesses of Themyscira--who has an islamic appearance and is presented as being the heart and soul of Themyscira. She is wise and compassionate.

Though not a Greek character, Scott also draws Steve Trevor in a way that is very reminiscent of the ancient Greeks' idea of beauty. She does this namely by presenting him with short, curly hair and an athletic body like the kind you see on ancient Greek statues. She even presents him nude whenever possible, and within the setting of Themyscira, he very much looks like he belongs there. The ancient Greeks did love presenting their men naked in all of their art, so it did add to the ancient Greek aesthetic. And of course, Scott's pencils are beautifully augmented with the collaboration of colourist Romulo Fajardo Jr, who gives a pastel look to each of the pages.

Writing-wise, Wonder Woman: Year One is very quintessentially Greg Rucka. All of the main characters are presented with agency and handled with care and respect. At no point is Rucka exploitive of the Amazons or any of the women in this book, and all of the characters are presented as complex and nuanced. Rucka's pacing is good, his writing is smart, and nothing he does in this story is ever done for shock value or by accident. In his book, if an action or an event doesn't serve a meaningful purpose in the story, it doesn't belong there.

There is admittedly nothing bad I have to say about this comic because that's how very well thought out and executed it is. At best, I have one or two nitpicks, but that's about it. One of those nitpicks being the loss of Steve Trevor's best friend Nick very early on in the story because it eliminated the only prominent black man from the story, which made Colonel Michaelis the only prominent man of colour in this volume. My other nitpick is that I found the use of Ares (the main villain in this volume) pretty underwhelming since he didn't do much when he actually appeared. At best, his brief appearance in "Year One" may have been on purpose since his part of the story does set up for "The Lies" and "The Truth" storylines respectively, also written by Rucka.

On the whole, this is the best volume of Wonder Woman Rebirth to start with in order to jump on board with the current direction of the mainstream DC Universe. It's especially a great starting point that sets the pace for the current direction of the mainstream Wonder Woman, and it will especially be helpful to understanding the events of  Wonder Woman's Rebirth storylines "The Lies", "The Truth", and "Godwatch" respectively.