The Best of the Huntress: Wonder Woman #304 Review 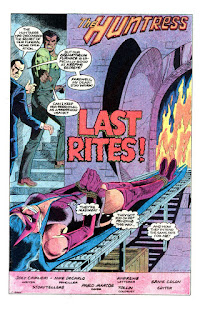 Summary: The Huntress has discovered the Undertaker's secret and risks exposing his funeral home scam to the public. His plan for keeping his secret is to dispose of the Huntress the same way he disposes of all his evidence: by burning her in his secret crematorium in the basement of his funeral home. He has already disposed of the Mechanic and Pat Pending in this fashion, and has one more client to dispose of before the night is over: a hitman by the name of the Paralyzer.

The Undertaker thinks he has things under control, but the Huntress still has a few tricks up her own sleeves: a fire and some fire retardant boots to facilitate her escape. Though the Huntress is able to put the Undertaker out of commission, she is not able to take him into custody as his underground furnace overheats and causes the Willow Funeral Home to explode, killing the Undertaker along the way. The Huntress is able to make her escape before the funeral home becomes engulfed in flames, but not before she is able to escape the grasp of Milo and Dr. Amos Tarr.

Review: This is kind of a strange issue in that it doesn't so much conclude this story arc as much as it transitions into the next one. This is one significant departure from Paul Levitz' style of writing as all of his story arcs had a clear beginning, middle, and an end. With Joey Cavalieri at the helm, he doesn't end one chapter of the Huntress' adventures and move on to the next thing, but instead builds upon the Huntress' continuity, leading to the formation an ongoing narrative. This was definitely a first in the Huntress' history. 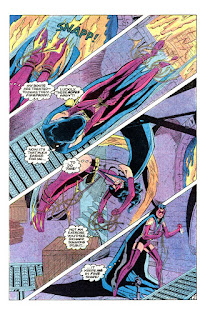 Character-wise, there's not much to say here since, once again, this issue serves as a transitional chapter. There are, however, some notable differences in the way that Cavalieri writes Helena Wayne vs how Paul Levitz originally characterised her.

One of the things that was established right away during Paul Levitz' original run is that Helena Wayne does not believe in killing her foes. Not just because murder is illegal and she is a licensed attorney, but also because she believes in holding herself to a higher moral standard and not being the same as the people she fights. She wants to set herself apart from the criminals she captures by setting a better example.

Interestingly, however, that doesn't mean she will feel bad if a murderer is accidentally killed during a fight with her, because--from her point of view--at least that person will no longer be in a position to cause any more harm. She won't actively pull the trigger, but she will not feel bad if the gun accidentally goes off. Cavalieri still brings that conflicting view of criminal deaths to his interpretation of Helena Wayne in this issue, but the execution is slightly different. Whereas Levitz characterised Helena as not feeling bad about criminal deaths during stressful situations, that's not entirely the case here.

While Helena still found herself in a highly dangerous situation, the only life that was threatened here was her own as opposed to the life of someone she loves. She was therefore not as stressed as she otherwise could've been, and her not feeling bad about the Undertaker's death was more casual than in the past. She even acknowledged in this issue that if given the choice to save his life, she would have also chosen not to, indicating that she doesn't always feel compelled to save the lives of murderers. She may not actively kill them, but she also don't believe she has to save them either. 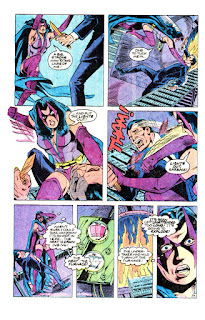 Another interesting note about Cavalieri's characterisation of Helena in this story is that she's a bit "edgier" than in Levitz' original interpretation. I wouldn't say that she angers easily, but she's definitely a bit more intense, and is very quick to put men in their place whenever they insult her on the basis of her gender.

While the latter has always been a part of her character since the beginning, she was never depicted as "tough as nails" and tended to snark more than she tended to double down on beating men unconscious. That's another notable difference between Cavalieri's interpretation vs Levitz. Whether or not that was meant to be a natural development for Helena's character after acquiring years of experience as the Huntress, or Cavalieri's own spin on the character is hard to tell as both can be easily argued.

One intriguing feat of this chapter is that Cavalieri establishes Helena's boots as fire-proof, which also establishes that Helena did think about the dangers she would encounter when she designed her Huntress costume. It's an interesting detail because design-wise, her costume is still impractical for what she does and still leaves her vulnerable to injury.

While obviously the costume was designed by male artists in the 1970s and "sexy" definitely factored into the design, still, from a narrative standpoint, it does make you think about why Helena didn't design a costume that completely covers her body to fully protect her? Fortunately, that's one detail that got fixed with the New 52 reboot and hopefully--if DC does bring back the pre-Crisis original--Helena gets fitted a new full body suit for Rebirth. (And no heels please! Heels are especially painful for running, climbing, and jumping!)

On the front of story, there isn't much to say until the next issue that kickstarts the second phase of this particular story arc. The only thing that continues to bother me about this story is the depiction of Milo since he has no real agency as a character. He is very much the "black male servant" ala Toberman in the "Tomb of the Cybermen" episodes of Classic Doctor Who. At best, it's a good thing comic book writers have gotten better at depicting black male characters in general these past three decades; I just wish this story was one of them since Cavalieri is--on the whole--a good writer.