Road to Justice Society Rebirth: What We Know So Far, Week 04 (Spoilers Ahead) 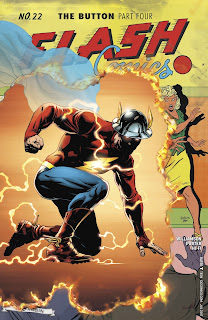 This past Wednesday saw the conclusion of "The Button" crossover between Batman and The Flash. I originally had this post scheduled for Wednesday like with the other three posts, but then I made the mistake of reading Superman #23 just before lunch that same day. If you read this week's Superman, you don't have to guess as to what "event" happened in that comic that sent me into a flying rage the rest of the day, but it is one that deserves its own post. For this one, we'll only focus on "The Button."

In my opinion, it was a bit underwhelming. I wasn't expecting a massive reveal on the status quo of the Justice Society or other DC Universe characters that have been missing in action. But I was hoping to get a little more than just Jay Garrick briefly appearing, and another tease of Dr. Manhattan, whom we already knew was involved in the darkening of the DC Universe. I was hoping we would get more of a glimpse of DC characters we've all been missing, and where they're currently being held to keep me excited for the next part of this ongoing narrative, the upcoming Doomsday Clock.

Characters like the remaining Justice Society founding members and their legacy characters. Whether or not the original versions of the Earth-2 Helena Wayne and Dick Grayson are also trapped in Mr. Oz's dimensional prison. Whether or not the Power Girl that's currently appearing in Harley Quinn is the pre-Flashpoint version and a key character to reviving the Justice Society and the more classic Helena Wayne Huntress. Is Lyta Trevor going to have her original origin reinstated? What is the status quo of the Legion of Superheroes who get more reboots, threeboots, and retroboots than one can keep track of? Stuff like that. Instead, it seems like the whole point of this instalment was to get Batman out of the way as Geoff Johns confirmed earlier. Still there is one detail from this week's issue worth discussing.

Jay Garrick in his very brief appearance seemed to provide evidence for a theory I had earlier regarding the potential fates of the Earth-2 Helena Wayne and Dick Grayson at the conclusion of Crisis on Infinite Earths. In an earlier post last month, I contemplated the possibility that the lightning that struck them in the concluding chapter of Crisis was not from the Shadow Demons as originally implied, but may have been Dr. Manhattan and Mr. Oz taking them out of the equation. 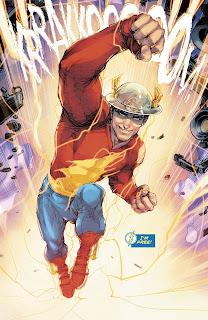 This would actually make sense because it would stay consistent with the original status quo of the new world erasing the Earth-2 Dick and Helena out of existence and from the memories of their own friends, and it would further tie Dr. Manhattan and Mr. Oz into the larger narrative of intervening and manipulating the DC universe. By establishing Crisis as one of their earlier interventions, that could also help explain why the Justice Society keeps getting taken out or erased with each reset.

The first time they were erased was in 1955 with the establishment of Hal Jordan and Barry Allen as the new Green Lantern and Flash respectively, and with the establishment of the Justice League in 1960. The Justice Society was not reinstated until 1961 when Barry Allen travelled to a parallel Earth that established this world as the home of the Golden Age stories and heroes. This world became known as Earth-2. The second time they were erased was at the end of Crisis on Infinite Earths in 1986 when they got sent into Ragnarok. They then came back a few years later, but then were killed again in 1994's Zero Hour event. They then came back in 1999 and remained a part of the mainstream DC Universe until the New 52 Reboot in 2011.

Between 2012 and earlier this year, newer versions of the Justice Society characters appeared in a newer incarnation of Earth-2, until Rebirth established these characters as derivatives of the classic originals who still exist somewhere on the mainstream DC Earth. This brings us back to Jay Garrick in this week's The Flash #22. As has been consistent with the Justice Society for the past five decades of their publication history, they were once again taken out of the equation, and Jay confirms this in his brief appearance.

Just like what has been done with them consistently throughout their existence, the Justice Society were once again erased from the memories of their friends and world. Jay has made the connection that the key to his own return lies with Barry Allen remembering him just like he remembered his former sidekick, Wally West. Jay managed to get Barry to utter his name--and was able to briefly return--but in Barry failing to remember him completely, this facilitated Dr. Manhattan taking him out once again. What's particularly curious about the way Jay was taken out again is that it was very similar to the way Dick and Helena were taken out in Crisis on Infinite Earths: via lightning strike. 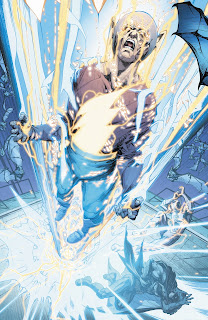 Though Barry still doesn't remember Jay, he now remembers him as the entity that saved him and Bruce from oblivion when the cosmic treadmill broke inside the speed force. With that seed planted, we can probably expect to see Barry continue to search for Jay in the upcoming months leading to Doomsday Clock. So The Flash comic may be worth continuing to follow for future clues on Jay's return. We were already getting that with the previous Rebirth Flash story arcs, but it now looks like it may become more prominent.

For the rest of the Justice Society, the books we probably need to follow are Blue Beetle to follow up on Kent Nelson as Dr. Fate. We probably need to keep following Batman, especially during the "Dark Days" and "Heavy Metal" events, and the Superman books since the titular character is going to play an important role in the upcoming Doomsday Clock event. Other books to probably follow are Harley Quinn for Power Girl and more hints of the Earth-2 Joker (the post-Crisis one already appeared), and the Justice League family of books like Trinity (which already hinted at the existence of the multiverse), as well as the main Justice League book. Nightwing is possibly another one to keep following since the original Earth-2 Dick Grayson was already teased in the "Nightwing Must Die" story arc that concluded earlier this month.

Other than that, the only thing we have left to do is wait for Doomsday Clock and hope that it answers more questions than "The Button" did. If more Justice Society characters begin to surface in the following months, and if we especially learn more about the status of the Earth-2 Helena Wayne and Dick Grayson, you'll definitely hear about it here!