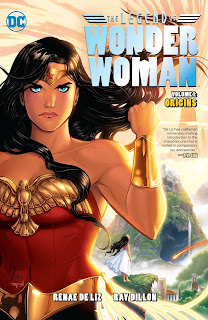 Description: THE BEGINNING OF A LEGEND!

On the hidden island of Themyscira, the Amazons, led by Queen Hippolyta, live in a kingdom of peace, protected by the gods. But the balance is upset when Hippolyta is granted what no immortal may have: a child, given life from the clay of the island. She is the princess Diana, who alone can sense the evil that is infesting the Amazon’s home.

But when a man from the outside world is brought to Themyscira as part of a conspiracy to overthrow its queen, Diana will risk everything to save his innocent life…and lose everything in the process. Soon, the Amazon princess finds herself in a world she never knew existed—America, a land of untold wonders that also finds itself threatened by a great war abroad.

In order to get back home, Diana and her new friends Steve Trevor and Etta Candy must head into the war zone and find the Nazi agent known as the Duke of Deception, who wields a powerful artifact that belongs to Hippolyta. And in order to defeat this powerful enemy, the princess of peace must become the hero she was meant to be. She must become Wonder Woman!

With gorgeous art, a period setting and contemporary flair, writer/artist Renae De Liz (THE LAST UNICORN), with help from artist Ray Dillon (NOBLE CAUSES), stunningly retells the origin of the greatest superheroine the world has ever known! Collects THE LEGEND OF WONDER WOMAN digital chapters  #1-27.

The new Wonder Woman film by Patty Jenkins starring Gal Gadot, Chris Pine, and Lucy Davis is now just weeks away from its cinematic debut, with tickets now on sale in both the US and UK. Tomorrow is also Free Comic Book Day (FCBD), which means lots of comics and graphic novels will be on sale at local comic book shops, in addition to getting free comics.

One of the freebies out tomorrow is Wonder Woman: Year One #1, which is the first chapter of the graphic novel Wonder Woman: Year One by Greg Rucka and Nicola Scott, which comes out in stores everywhere on 09 May. (It may, however, already be available at local comic book shops). In addition to that freebie, I imagine many comic retailers will also be putting a lot of other Wonder Woman comics and graphic novels on sale in anticipation for the new film.

One of the newest graphic novels that came out just last year that would be a great starting point for new fans excited for the film is Legend of Wonder Woman: Origins by Renae De Liz and her husband, Ray Dillon.

For a lot of people who are new to comics, the first question that is always asked is "where do I start?" A valid question when you consider that Wonder Woman (like all of DC) is almost 80 years old, which means there is also almost 80 years of stories to choose from. That can be intimidating for anyone who just wants to start somewhere and not be bogged down by nearly eight decades of DC continuity. Fortunately, DC does publish standalone graphic novels with their characters that are easily accessible to newer readers. One such graphic novel is Legend of Wonder Woman: Origins by creators Renae De Liz and Ray Dillon.

As a graphic novel, the story of Legend of Wonder Woman: Origins is very self-contained with a clear beginning, middle, and an end, and is not tied to mainstream DC continuity. This is, again, ideal for new readers who want an easy entry point to the character and not feel intimidated by the decades of ongoing continuity. The book is also All Ages, which makes the story is accessible to everyone, especially young children. It is therefore also an ideal book for parents who want to buy a Wonder Woman comic for their child and not have to worry about things like profanity, sexually suggestive dialogue, and extreme, graphic depictions of violence.

When it comes to the book's contents on those fronts, as far as language is concerned, there is only one utterance of the word "arse" (which is the British spelling of "ass"), but that's about it. There are no other swear words beyond that point, and any other insults uttered by the characters don't go beyond schoolyard level. If there is any wonder about the inclusion of the word "arse" at all, to be fair to the writer, she originally thought it was a safe euphemism for the word "ass" (kind of like "darn" is for "damn") and didn't find out until later that it was actually just the British spelling of the same word.

On the violence content, its depiction in this graphic novel is also PG-level, meaning there is some blood shown in some of the war scenes, but there is no gore. Injuries are also depicted in the hospital scenes, but there are zero depictions of severe injuries like faces burnt off, dismemberments, or men split in half with their intestines hanging out. None of that is present. All that you see just are men lying bandaged up in hospital beds. Any monsters that do appear tend to be skeletal-looking, but there is no torture or body horror.

On the sex front, there's a blossoming romance between Steve Trevor and Princess Diana, but there is no depiction of sex at any point in this comic. There is also no sexual dialogue, jokes, or innuendo either. Just two people getting to know each other and forming a very meaningful bond with each other in a way that's appropriate for all ages.

Story-wise, the graphic novel takes Wonder Woman back to her Golden Age roots and reexamines the original ideas and concepts of her original creator, William Moulton Marston, through a modern lens. It has three acts that are easily identifiable as the origin (Act 01), the transition to man's world (Act 02), and Diana becoming Wonder Woman (Act 03).

Act 01 specifically explores the origin of Queen Hippolyta, the Amazons, their culture, Themyscira, the Queen's daughter--Princess Diana--and how the latter feels about her mother's legacy and her place within her respective society. It is also in this act that Diana is introduced to Steve Trevor, her iconic love interest. Act 02 sees Diana leave Themyscira for the world beyond and explores how she adjusts and adapts to this new world. It is also in this act where she meets her best friend, Etta Candy, who is also largely based on the Golden Age version of the character. Act 03 sees Diana accept her role as Wonder Woman in man's world and we even see the origin of her costume.

Throughout the comic's narrative, we are introduced to various Wonder Woman villains, including ones who become her future villains. Among them are Ares (the primary antagonist for this story), the Duke of Deception, and the original Priscilla Rich Cheetah. There are also teases and references to the Golden Age Wonder Woman comics, and even characters strongly associated with DC's Golden Age like the Justice Society of America, which Wonder Woman was also a member. There are also cameos from characters closely connected to DC's more iconic properties such as a young Perry White (the EIC of the Daily Planet in the Superman comics), Alfred Pennyworth (Batman), Elongated Man (Justice League), and there's even a reference to the Atlanteans (Aquaman). Though these small references will definitely make long-time DC Comics fans smile, they also don't distract from the overall story.

Thematically, the story covers various themes, most of which are centred on redefining femininity, challenging stereotypes as well as patriarchy, and exploring the nuances and complexities of motherhood. It is also a coming of age story that shows all of the transitional phases of the lead character, as well as the relationships she forms along the way. On that note, there is a strong emphasis on female friendships, namely between Diana and Etta Candy, the latter of which is the most energetic character of the comic. There is also exploration of sisterhood between the Diana and her Amazonian family, as well as between Etta Candy and the Holliday girls.

As an art piece, the story is very carefully thought out and is very well written, complete with thoughtful characterisation for each character, as well as meaningful character development. The book is also gorgeously illustrated by De Liz and beautifully inked and coloured by Dillon. Every panel is very well laid out and easy to follow, and the visuals themselves have something of a cinematic quality to them. A lot of times, reading this comic can feel like an interesting blend of reading an actual novel and watching a movie.

There's actually nothing bad to say about this comic at all, but it does have some flaws. One of the major ones being that there is no followup to the sub-plot involving Antiope who was looking to betray her sister (Queen Hippolyta) in the first act of this story, and the fate of the Amazons themselves is left kind of open-ended. There are some reveals about what really happened to them, but it also looked like the rest was being saved for a sequel volume.

On that note, there were several teases by the conclusion of this story for a potential sequel such as Priscilla Rich eventually becoming the Cheetah (one of Wonder Woman's iconic villains), as well as Etta and Diana looking to visit Gateway City, which was the city Diana resided in during the Golden Age. To be fair to De Liz and Dillon, however, they did have the sequel for this story mapped out and ready to go, and were probably going to tie up some of these loose plot threads in the sequel. They were originally in the works for producing it, but unfortunately, DC cancelled the project.

Part of me still hopes that DC will reconsider and allow De Liz and Dillon to complete their story because of the good work that they did with the first volume. There is still so much story to tell and I loved the fact that this Wonder Woman comic was a very accessible for newer readers who haven't been following DC for years. The book was nominated for an Eisner last year, so it definitely got recognition and it was very well received critically.

Perhaps when the movie comes out in June, that alone might create a stronger demand for this comic, and that might be the thing to persuade DC to work something out with the creators. After all, they did manage to get Greg Rucka back to write the Rebirth Wonder Woman series, which incidentally, is going to be the recommendation I'm going to talk about next!

On the whole, this is a great Wonder Woman comic for newer fans to check out to get oriented with the character right away. De Liz and Dillon do a great job at reinventing the character's Golden Age mythos in a way that stays true to the original concept of the character, but also keeps her story modern for a younger generation. Not to mention the art is gorgeous in this book!

It's also a comic that invites fans of the mainstream comics for all of the references that it makes to the original Golden Age Wonder Woman and Sensation Comics that were originally published in the 1940s. It also has cameos from other DC characters, and even makes references to the Justice Society of America, which would definitely be attractive to Justice Society fans like myself.

It's definitely a comic worth having in one's collection, and definitely a great way to familiarise readers with the character, especially if they want to invest in the mainstream comics at some point.