I ♥ Huntress, Day One: The Origin of Helena Wayne 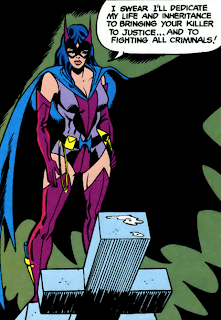 Between the pre-Crisis and the New 52 continuities, there have been two different versions of Helena Wayne's origin, both established by Huntress co-creator, Paul Levitz.

In the first version of her origin, both Batman and Catwoman hung up their capes and cowls for good in 1955 and settled for a normal life as a newly married couple. In 1957 they welcomed a fortunate baby girl into the world who would later become the Huntress as an adult.

For the next twenty years, Bruce and Selina Wayne enjoyed the full perks of a normal family life without any of the hazards that came with their costumed lives. Their daughter, Helena Wayne, similarly enjoyed the full benefits of growing up in a wealthy household alongside two badass superhero parents. In addition to being trained mentally and physically to her utmost peak, she also attended the best schools in Gotham and even graduated top of her class from Harvard University with a law degree.

Just when Helena was beginning her career as an attorney, tragedy struck the Wayne family for the first time in decades when a former henchman of Selina's blackmailed her into committing one last crime as Catwoman--a final crime that resulted in Selina's death. Both Bruce and Helena were distraught by the loss of Selina, though Bruce did not feel inspired this time to pick up the cape and cowl again, leaving his daughter Helena to pick up the pieces.

Standing in front of her mother's grave in her newly designed Huntress costume, Helena made a similar promise to her mother that the ten-year-old Bruce Wayne made to his parents decades prior: a commitment to avenge her death and to spend the rest of her days fighting crime in Gotham. With that, Helena spent her first case as the Huntress tracking down Silky Cernak (the man responsible for her mother's death) and sabotaging 'a business deal' he was scheduled to finalise that same night. Upon his capture, Helena did in fact commit to fighting crime both as a lawyer and as the Huntress from that point forward. 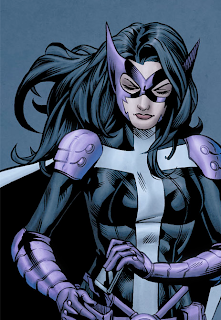 In the New 52 version of her origin, she lived a very different life from the one she had previously, though some of the essential kernels remained the same.

In the newer Earth-2 continuity, neither Bruce nor Selina gave up being Batman and Catwoman upon marrying and raised their young daughter to become a skilled crime-fighter like themselves.

In huge contrast with the pre-Crisis Helena Wayne who had a social life growing up, the New 52 version of her appears to have been socially isolated with very little opportunities for interaction with other kids her age outside of Superman and Wonder Woman's families. She was trained from the moment she was old enough to walk to her physical and mental peak and confirmed to a college student at a 'Take Back the Night' rally that she had been home schooled.

She made her debut as Robin in her early teens and successfully stopped a mugging from taking place under her mother's supervision. Sometime shortly after this first outing, Helena lost her mother during an Apokoliptian attack that wounded her father and killed her mother, traumatising the young Helena in the process. In a fit of rage, Helena assaulted her mother's killers only to discover she was up against an entire army with very powerful weapons. She is rescued by Kara Zor-L (Supergirl) after answering a distress call from Batman, leading to the first meeting between Robin and Supergirl. Together, the two teenage heroines wiped out the soldiers that took the life of Helena's mother and discovered the existence of boom tubes and other Apokoliptian technology in the process.

The two heroines spent the rest of their years on Earth-2 fighting off the forces of Apokolips until a plan from Batman ended the war on Earth-2, but resulted in the deaths of Batman, Superman, and Wonder Woman. Following the loss of the Earth-2 Trinity, Robin and Supergirl were then transported to the mainstream DC Earth via a boom tube where they started their lives over as Huntress and Power Girl. Kara Zor-L became Karen Starr, a successful entrepreneur and CEO of Starr Industries, and Helena Wayne took on the identity of Helena Bertinelli, the deceased daughter of a crime family.

The exact details and reasons that factored into Helena Wayne's decision to become the Huntress in this continuity are currently unknown beyond the fact that she could no longer live the life that she had on Earth-2. What is known is that just like before, Helena designed her Huntress costume as an amalgamation of both her mother and father's costumes and added a cross as part of her costume's design this time around. Whether or not the cross is a part of her Helena Bertinelli identity or her way of staying close to her parents in spirit is yet to be explored.
Posted by Diane Darcy at 12:42