I ♥ Huntress, Day Two: The Past and Present Helena Wayne 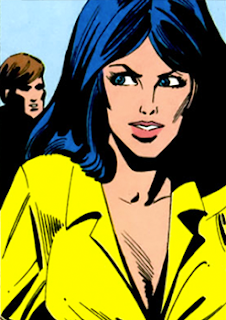 It’s always a fun exercise comparing and contrasting the pre-Crisis Helena Wayne with the New 52 incarnation. There are some similarities between the two versions, but many more differences.

The first time I compiled a list of things that changed and remained the same between the pre-Crisis and New 52 versions was in January of 2012, back when the character was still very much new. Obviously that previous post is completely outdated now since we know a bit more about her past on Earth-2 and what kind of 'personality' she has now, but nevertheless, it's always good compare notes.

I will admit the more I learn about the New 52 version of Helena Wayne, the more I miss the pre-Crisis incarnation on so many fronts. For one, I really do miss the fact that Helena was once a college graduate and actually had a career outside of being the Huntress. I especially loved the fact that she was a lawyer and was just as committed to this profession, even if she enjoyed her work as the Huntress a lot more.

The current version hasn't even graduated from secondary school, let alone attended college, which feels like a huge waste of someone who could actually ace most people in United Kingdom on their A-levels given her upbringing. On the front of actually having a career, Kara Zor-L has at least acquired a career as an entrepreneur. Helena by contrast has committed solely to a life of crime-fighting and doesn't have much of a life outside of that, which also feels like a step backwards for the character. She doesn't even appear to have a sex life these days (she did have one pre-Crisis), and while that in itself is not necessarily a bad thing, it is also one more way that she is less layered as a character, especially given her past characterisation.

Another thing that I miss about the pre-Crisis Helena Wayne is that she had the entire city of Gotham to herself following her father's retirement and Dick Grayson's relocation to Africa. Not only was it really cool to read about a female lawyer who was also Gotham's sole protector at night, but her exploits as the Huntress earned her quite a reputation amongst Gothamites.  People graffitied her name on street walls, her shadow caused crooks to look over their shoulders, and she was even the envy of an ambitious female reporter who succeeded in gathering a group of people together to protest against her vigilantism.

Despite having the whole world to herself in the New 52 and having been responsible for numerous high profile exploits throughout the world (she even has an INTERPOL profile), her presence on Earth-1 seems to go largely unnoticed as no one else from the superhero community has confronted her for her activities as the Huntress, not even Batman. Whether or not that will change in the future is left to be determined by the current DCU Gods, but if Helena does need a more permanent home to call her own, she's always welcome to return to the island of her ancestry. It's not as big as America, but America is also not in short supply of superheroes right now, especially not in Gotham. Also, Britain's most iconic superhero tends to spend more time travelling in a blue box through time and space, so she would--for the most part--have the entire UK to herself. I for one, would not complain if the UK reclaimed a fellow Wayne. :P 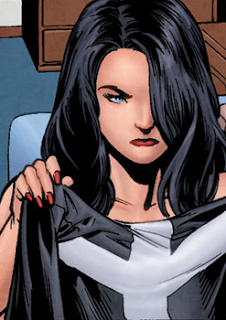 While much of what was cool and original about Helena Wayne was sadly lost with the New 52, some things did, however, remain the same. Though writer Paul Levitz does struggle to *accurately* represent feminism in writing, he did preserve her feminist values which have been a huge part of her characterisation since the pre-Crisis days. Not only does Helena remain intolerant of sexual exploitation and violence towards women, but she's also been shown to actively support and even partake in rallies that seek to bring social awareness to issues that specifically affect women.

In addition to preserving Helena's feminist traits, she similarly retained many of her quirkier ones as well. For example, the pre-Crisis Wayne was often noted for her idiosyncrasy, often taking the form of always being late for work every morning (a consequence of her leading a double life), making soufflés in her Huntress costume (yes, this really did happen), to even drinking a glass of wine with a box of chocolate chip cookies while investigating her cases. She was even perfectly fine with letting her colleagues at work think she was a little bit crazy with her tendency to do inexplicable things at random.

The New 52 version of her is similarly easily drawn to sweets like a moth to a lightbulb. She'll literally eat any left over sweets while 'working' (recall the time she ate a sfogliatella while hacking a police computer at a police station) and loves to consume every unhealthy food item you can think of. (In all fairness to her, she can get away with that since she leads a very active lifestyle). She'll even take a catnap aboard an enemy ship before making her attack, and as an added bonus, she's also perfectly fine with letting bellhops think she's gay when bringing female sex workers into her hotel room. (She even had a nighty on for that occassion!)

One final thing that has remained consistent between the pre-Crisis Wayne and the New 52 version of her is her sheer confidence in her own abilities and aggressive fighting style. Admittedly Helena Wayne as an aggressive and angry crime-fighter was more characteristic of Joey Cavalieri's depiction of her, but it was explored quite a bit with Paul Levitz' initial characterisation of her as well, most notably in the Crime Lord story arc where she threatened to seriously take a life for the first time. While Levitz did originally establish Helena as possessing some degree of moral ambiguity with regards criminal deaths, she was also not shown to be directly responsible for any deaths. In the New 52, this moral ambiguity is much more explicit and is perfectly fine with killing if she feels the ends justifies the means. She's a bit like the original Golden Age version of her father in that regard.
Posted by Diane Darcy at 23:16