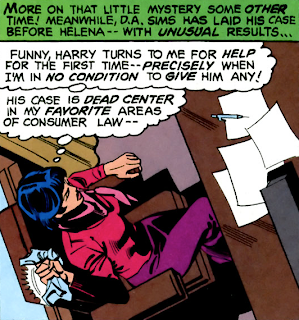 Here it is ladies and gentlemen, the final topic as we bring I ♥ Huntress week to a close. It is the one final piece of Helena Wayne's history that I am definitely missing from her New 52 incarnation: her profession.

As I've stated in the previous posts, one of the things that was cool about Helena Wayne was that she chose law as her profession. Not only was it fitting for Batman's daughter to pursue a career in criminal justice but it was also a unique aspect of her character that differed from the rest of the Wayne family who were, for the most part, industrialists or practitioners of medicine.

While much of the details on how Helena functioned as a lawyer is not currently known (and she was retconned out of continuity before a future writer had the chance to expand on that aspect of her character) a lot can still be inferred based on how she was written in her back-up stories in Wonder Woman and especially in the Roy Thomas-written miniseries America vs The Justice Society.

One thing that was known right away was that her areas of law dealt with public interest and consumer law. She also had a very strong reputation amongst her colleagues and was a very popular choice lawyer amongst Gotham's citizens. More often than not, her clients were normal everyday citizens and the majority of the people that she prosecuted in court were individuals in a position of power. Sometimes her exploits even prompted the federal government to act such as the time that she exposed a government official for a real estate scam that had left hundreds of people from Gotham's poorer district homeless.

Another thing that was notable about Helena as a lawyer was that she often used her own clients' cases as a way of finding out what was going on in the Gotham underworld and what crime busts she would make as the Huntress. It was also very evident that she was far more invested in her work as the Huntress than as a lawyer, largely because she preferred to stop a crime from happening rather than deal with the politics in court, which would often bend to the will of the person with the most power and money. As the Huntress she also had considerably more control over the gathering of evidence that she could later use to convict a criminal in court and insure that he or she would actually see prison time as opposed to squeaking their way out of the handcuffs through clever exploitation of the justice system. The latter in particular was one of the things she disliked most about her profession.

On the subject of balancing her activities as the Huntress and her actual job, Helena was often times late for work as a consequence of staying up until three or four o'clock in the morning busting criminals as the Huntress. Sometimes she wouldn't even show up to work at all which earned her the contempt of her partner Roger Demarest who thought of her as 'a rich princess who had nothing real to offer the law firm than her good looks and her father's money.' Her senior partner, Arthur Cranston, thought very differently of Helena and actually acknowledged her talents as a lawyer and even had the highest respects for her. He also often times excused Helena's 'strange habits' on the basis that she was one of the best lawyers in his law firm.

Of her entire pre-Crisis career, by far the highest profile case she had as lawyer was the time that she defended the entire Justice Society in a very public court from accusations of treason that her father made in a diary going back to the World War II era. During this case, she fought very vehemently against her father's words and even considered outing her father as Batman (and subsequently herself as the Huntress) as a way of proving the JSA's innocence. This consequently put her at odds with Dick Grayson who challenged Helena in court on Bruce's behalf, and the only way Dick and Helena were prevented from going the extra mile was through the timely intervention of Power Girl who provided the testament needed to put the entire case to rest.

In the New 52, Helena has yet to establish a life and a career outside of being the Huntress, but if/when a future writer decides to develop her character further, I do hope they stay true to her pre-Crisis incarnation and have her decide to have her pursue law again. Not only would it be a logical and progressive career choice for her character even in her newest incarnation, but it would certainly be one step closer to reinstating the character back into the boots of the Helena Wayne I knew and loved from the pre-Crisis days.
Posted by Diane Darcy at 17:23