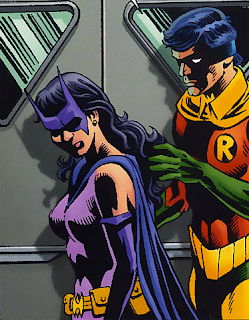 It is often stated of the weeping willow individual (that is anyone born between 3 September - 12 September in this case) that they are 'honest with good intuition, but nonetheless frequently suffer greatly in matters of the heart before they find an anchoring partner.'

In the case of Helena Wayne (who was established as having been born on 7 September by Joey Cavalieri in 1984), this very much rings true. While she is a rather remarkable woman on many fronts, she has unfortunately not had much success with finding a romantic partner who genuinely loves and accepts her for the person that she is. This was especially true of the one longterm relationship that she did have pre-Crisis. Even when she did come across someone who actually loved and respected her, that person either turned out to be 'family' or someone who didn't respect personal boundaries and engaged in stalking behaviour.


The first and only known longterm relationship Helena Wayne had in the pre-Crisis continuity was with a lad who was also Gotham's young District Attorney, Harry Sims. Before he learnt of her life as the Huntress, Harry did actually love and admire Helena for her intelligence and assertiveness in her fight for justice in the courtroom. He even turned to her for advice whenever he found himself with difficult cases he couldn't handle, and unsurprisingly, was physically attracted to her as well. Yet, despite these positive qualities, he also maintained very patriarchal views of women and relationships which later influenced his attitude towards Helena once he did learn of her life as the Huntress. In particular, he was not comfortable with the idea of Helena being able to take on dangerous criminals by herself and had an awful tendency to undermine her skill and ability to do so, often rationalising that this line of work was 'too dangerous' for a woman. To top it off, he was not comfortable with being in relationship with a woman who, from his point of view, was 'trying to get herself killed,' once again completely denying Helena's competence in a male-dominated endeavour.

Obviously these 'concerns' did not stop Helena from operating as the Huntress, but they did nevertheless produce plenty of obstacles in her relationship with Harry. After a certain point, for example, he started exhibiting controlling behaviour in the form of withdrawing information from her on cases he knew she would be interested in, and even condescended her like a father to a child when she didn't do things his way. These are, of course, very transparent examples of sexism at work, and these behaviours are especially symptomatic of an abusive relationship--something that Helena herself even acknowledged in narrative. Yet, despite recognising that she was in a toxic relationship with a man who did not actually respect, let alone 'love' her, she was never written by any of her writers as ever exiting this relationship--something that a self-respecting woman who is already financially secure (such as Helena) would have already done. Whether or not the pre-Crisis Helena would have eventually moved on to someone else will never be known because she was axed during the events of Crisis on Infinite Earths before her then-announced miniseries saw publication. Nevertheless, Harry Sims was not the only potential love interest Helena had.

One popular choice of a potential love interest for Helena was her own father's ward, Richard 'Dick' Grayson, who was 25 years her senior pre-Crisis. In addition to the fact that he was raised by her father, Bruce Wayne, from the time he was 8 years old and fought alongside him as Robin, Dick was also around to raise and even take care of Helena when she was born. Not only was he still a part of the Wayne family during this time, but he had also--originally--established a brother-sister relationship with Helena growing up. Yet, despite the familial relationship that already existed between Dick and Helena, that didn't stop writers from considering him as a potential love interest for Helena. We saw the first iteration of this in the 'Together Again For the First Time' story arc of her back-up series in Wonder Woman.

In the narrative, Dick as Robin teamed up with Helena on a case involving a crime boss who would later be known as the Crime Lord, and both had taken down the Joker before that. While working out together in Helena's flat, Dick and Helena discussed her relationship problems with Harry. Dick openly acknowledged that she was in relationship with a guy who didn't fully understand or appreciate her, and therefore couldn't workout in the longterm. He especially drew a parallel to Bruce's relationship with Selina, particularly noting that the reason this relationship worked as well as it did was because Bruce and Selina understood each other in way that most people would not have been able to. He especially made a point of emphasising that if Helena was to have a chance at a successful relationship with anyone, she would have to get together with a man who will understand her, love her, and respect her for the person that she is, and not for who he wants her to be as was the case with Harry. It was also during this conversation that the two noticed each other under a sexual light for the first time and a mutual physical attraction was established.

Of the two parties, only Dick openly acknowledged his sexual attraction to Helena that he decided to depart back to Africa to avoid pursuing those feelings further. Although a relationship between the two never took place in either the pre or post-Crisis continuities (his one night stand with Helena Bertinelli notwithstanding), Dick's attraction to Helena continued to be hinted at most notably in Infinity Inc and America vs The Justice Society. In the post-Crisis continuity, it was explicitly acknowledged in the JSA Annual from 2008 that Dick was in love with Helena and wanted to be there for her when she was going through a very stressful time in her life. It was also within this same narrative that Helena admitted to Power Girl for the first time that she had always been in love with Dick and that she was never really in love with her actual boyfriend, Harry Sims. (Admittedly, I have to give props to Geoff Johns for writing Helena as wanting out of this relationship even if his establishing of Helena as in love with Dick felt rather forced).

The last known potential love interest for Helena Wayne during the pre-Crisis continuity was a character created during Joey Cavalieri's run of her series, an Italian-American police officer named Gary Minelli. Since his initial introduction, it was established that Gary found Helena very attractive and even helped her escape from a psychiatric facility that had been using its patients for illegal experiments for new drugs. Helena herself was shot with a cocktail of psychedelic drugs that left her hallucinating for a lengthy period of time and it was Gary who looked after her while she was high. By the time Helena had regained consciousness and was able to think properly, Gary wasted no time in asking for her phone number, which surprised Helena that he was not remotely intimidated by her.

Whether or not Gary learnt Helena's real identity was never explicitly established, but I always assumed that he did since he had unmasked (and apparently undressed) her while she was unconscious, and was especially assigned by the Gotham Police Department to spy on her. While Gary was in fact following orders from his superiors, he also admitted to himself that he would have still stalked Helena regardless to learn more about her and hopefully ask her out. Needless to say, Helena found Gary's stalking behaviour very off-putting and was particularly disturbed by the revelation that he had been invading her privacy. Whatever became of this encounter remained unresolved because Crisis wiped the slate clean shortly after this story was written.

Within the New 52 continuity, Helena Wayne hasn't had any romantic relationships to make note of, but it is known that she did not actively date on Earth-2 due to a lack of privacy from her father. Whether or not she has hooked up with anyone since arriving to the mainstream Earth is also unknown, but it is known that she does flirt with men as a way of getting information quickly (and possibly outside of 'work' as well since she implied being quite skilled at it), and has even given flirty gazes at women, most notably to an Italian reporter named Christina and her best friend Kara. She was even perfectly comfortable with bringing a female sex worker into her hotel room, and was even wearing sexy lingerie 'for the occasion' even if it was part of her cover. (On that note, who does she wear sexy lingerie for if she actually owns some?)

Admittedly, Helena reads to me as someone who is potentially bisexual in the New 52, and apparently I'm not the only one picking up on this. Quite a few of my followers on Tumblr have picked up on this as well, including a friend of mine who isn't even into femslash. Whether or not Helena's sexuality will ever be explicitly acknowledged one day, I guess that will depend on the next writer who gets a hold of her (assuming Levitz doesn't do it first). One thing that is for certain though, is that she is very much a clean slate to work with. Since there was never a Dick Grayson on the New 52 version of Earth-2 that was a part of the Wayne family, it is quite possible now to pair her up with the mainstream version of Dick (assuming Dan Didio doesn't kill him off) and the incestuous vibes won't be quite as strong this time around. It's also just as equally possible to officially pair her up with Power Girl if a future writer decides to go the LGBTQ route with Helena. Or if a future writer feels like exploring the Huntress/Catman relationship again now that the Huntress is back to being a Wayne with the BatCat genes to actually make this idea more significant, he too is another possibility for a love interest.

Once again, brand new universe, brand new version of the character, endless possibilities for romantic/sexual relationships in the character's future.
Posted by Diane Darcy at 20:23