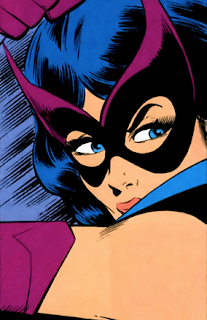 After roughly three days of talking about how charming Helena Wayne is as a person, we now get to talk about the other side of her personality: the Huntress.

How the Huntress has been depicted on page has depended on the writers who have handled her and the zeitgeist of time period with which she was written. This is true even for the Helena Wayne version of the Huntress. For the most part, Helena Wayne's Huntress personality has been known to range from largely compassionate and optimistic to downright brutal and merciless depending on the circumstances.

In her original interpretation, the Huntress preferred to maintain an image of hope and embodied much of the idealism that people already associated with costumed superheroes like Batman, Superman, and Wonder Woman. Like her father (Batman) before her, the Huntress utilised her various skills and knowledge to fight crime with the best interests of Gotham's citizens in mind. More importantly, she aspired to become the same beacon of inspiration for good that her predecessors represented to the wider human population.

In practise, this often took the form of taking the kinds of risks that no one else was willing to take and often putting her own life on the line to secure the safety of others. When confronted by actual criminals, she would--for the most part--just threaten to throw their arse in the jail and demanded cooperation to minimise the chances of a fatality. In the event of encountering an otherwise law-abiding citizen who happened to commit a crime, the Huntress would then focus on learning the actual circumstances that led this individual to do something they would not have thought of doing otherwise. To these individuals, the Huntress was most compassionate towards and would often try to reason with them if it would prevent them from actually completing the crime.

Despite embodying all that is good about humanity, the Huntress is also not beyond crossing the line herself if she feels the ends justify the means, and the Huntress has also been known to bring out the worst in Helena Wayne. This was especially most notable towards the end of Paul Levitz' initial run of her back-up series, this was especially true in Joey Cavalieri and Geoff Johns' interpretations of her, and it is especially a defining trait of her character in the New 52.

Amongst the character traits that were established early on in her publication history, Helena Wayne as the Huntress has never been known to be sympathetic towards murderers, human traffickers, basically anyone who has committed acts of violence against innocent people. It especially hits her berserk button if the person on the receiving end of that violence happens to be a woman, a child, a person of colour, or any vulnerable member of society. If a violent criminal happened to 'fall to their death' or 'accidentally blow themselves up' during an encounter with her, the Huntress would not shed any tears for their loss and would even admit that to herself. If a criminal especially threatened the lives of the people in her life as a way of exacting their revenge on her (or as a way of destroying Batman's legacy in the case of the Joker), she would then actively contemplate killing in a fit of rage.

Out of the times she came close to fatally hurting a criminal, only once did she actively plan to murder one, and that was when the Joker attacked and disfigured her boyfriend and was responsible for the deaths of several other people in her life, including Alfred. She also experienced a mental breakdown during this time and was only prevented from completing the murder when Power Girl intervened. When asked about what drove her to kill (something that shocked Power Girl to start with), the Huntress rationalised it was a necessity given how the Joker had systematically been attacking her in both of her identities. She also admitted to not feeling any remorse should she have committed the murder.

Even in times when circumstances didn't actually force the Huntress consider something as extreme as murder, she wasn't exactly soft on criminals either, and as mentioned earlier, this was especially true of Joey Cavalieri's interpretation of the character. Whether it was a high tech bank robber, a creepy-looking baby trafficker who could give the Phantom of the Opera a run for his money, or even a criminal nurse posing as a therapist, the Huntress was often pretty rough in the way she beat up criminals. She would either bust your jaw with her heals, pick you up and throw you into a book case, or simply beat you unconscious depending on the gravity of the crime-committed. It's enough to say, even her pre-Crisis boyfriend commented to her that he thinks she enjoys violence.

Within the context of the New 52, the Huntress' affinity for violence is much worse than before. In addition to being aggressive in her fighting style, the Huntress now kills criminals more casually than before. In fact, she kind of reminds me of the Golden Age version of her father in a way, especially considering how very casually Golden Age Bruce snapped necks, tossed crooks to their deaths from high altitudes, and at one time even gunned down the driver of a truck with a machine gun, only to throw a noose around another passenger's neck and hang him from the Batplane. The main difference of course is that the Huntress prefers blowing up henchmen with explosives and reserves her crossbow for actual crime bosses, in this case, the leader of a sex-trafficking ring.

By the year 2013, the Huntress' proneness for casual killings has died down considerably, though in the hands of another writer, who knows when that susceptibility will rear its ugly head again.

Next up, friendship for tomorrow! (And boy, do I have plenty of material for this day).
Posted by Diane Darcy at 20:14